The Mute Swan (Cygnus olor) is a species of swan, and thus a member of the duck, goose and swan family Anatidae. It is native to much of Europe and Asia, and (as a rare winter visitor) the far north of Africa. It is also an introduced species in North America, Australasia and southern Africa. The name 'mute' derives from it being less vocal than other swan species.[2][3][4] Measuring 125 to 170 centimetres (49 to 67 in) in length, this large swan is wholly white in plumage with an orange bill bordered with black. It is recognisable by its pronounced knob atop the bill.

The Mute Swan was first formally described by the German naturalist Johann Friedrich Gmelin as Anas olor in 1789, and was transferred by Johann Matthäus Bechstein to the new genus Cygnus in 1803. It is the type species of the genus Cygnus.[5] Both cygnus and olor mean "swan" in Latin; cygnus is related to the Greek kyknos.[6][7] The synonym Sthenelides olor has occasionally been used in the past.

Despite its Eurasian origin, its closest relatives are the Black Swan of Australia and the Black-necked Swan of South America, not the other Northern Hemisphere swans.[2] The species is monotypic with no living subspecies.[2][4]

Mute Swan subfossils, 6,000 years old, have been found in post-glacial peat beds of East Anglia, Great Britain.[8] They have also been recorded from Ireland east to Portugal and Italy,[9] and from France, 13,000 BP (Desbrosse and Mourer-Chauvire 1972–1973).[Full citation needed] The paleosubspecies Cygnus olor bergmanni, which differed only in size from the living bird, is known from fossils found in Azerbaijan.[citation needed]

Fossils of swan ancestors more distantly allied to the Mute Swan have been found in four U.S. states: California, Arizona, Idaho and Oregon.[10] The timeline runs from the Miocene to the late Pleistocene, or 10,000 BP. The latest find was in Anza Borrego Desert, a national park in California.[10] Fossils from the Pleistocene include Cygnus paloregonus from Fossil Lake, Oregon, Froman's Ferry, Idaho, and Arizona, referred to by Howard in The Waterfowl of the World as "probably the mute type swan".[11]

The largest Mute Swans are found in the Caspian Sea area, on migration.[12] 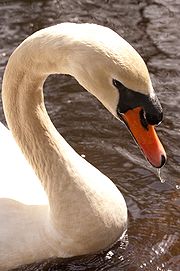 "Polish Swan" on the right 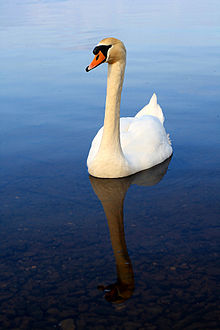 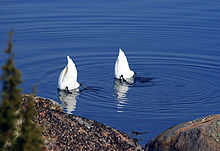 A Mute Swan in its natural habitat 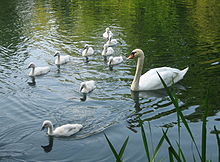 The Mute Swan is one of the heaviest flying birds, with males (known as cobs) averaging about 12 kg (26 lb) and the slightly smaller females (known as pens) weighing about 9 kg (20 lb).[15] While the top normal weight for a big cob is 15 kg (33 lb), one unusually big Polish cob weighed almost 23 kg (51 lb) and this counts as the largest verified weight for a flying bird, although it has been questioned whether this heavyweight could still take flight.[16] Its size, orange-reddish bill and white plumage make this swan almost unmistakable at close quarters. Compared with the other Northern white swans, the Mute Swan can easily be distinguished by its curved neck and orange, black-knobbed bill. Unlike most other Northern swan species (who usually inhabit only pristine wetlands without regular human interference), the Mute Swan has, in some parts of the world, become habituated and fearless towards humans. Such swans are often seen at close range in urban areas with bodies of water.

Young birds, called cygnets, are not the bright white of mature adults, and their bill is dull greyish-black, not orange, for the first year. The down may range from pure white to grey to buff, with grey/buff the most common. The white cygnets have a leucistic gene. All Mute Swans are white at maturity, though the feathers (particularly on the head and neck) are often stained orange-brown by iron and tannins in the water.

The morph immutabilis ("Polish Swan") has pinkish (not dark grey) legs and dull white cygnets; as with white domestic geese, it is only found in populations with a history of domestication.[17]

Mute Swans nest on large mounds that they build with waterside vegetation in shallow water on islands in the middle or at the very edge of a lake. They are monogamous and often reuse the same nest each year, restoring or rebuilding it as needed. Male and female swans share the care of the nest, and once the cygnets are fledged it is not uncommon to see whole families looking for food. They feed on a wide range of vegetation, both submerged aquatic plants which they reach with their long necks, and by grazing on land. The food commonly includes agricultural crop plants such as oilseed rape and wheat, and feeding flocks in the winter may cause significant crop damage, often as much through trampling with their large webbed feet, as through direct consumption.[18] Unlike Black Swans, Mute Swans are usually strongly territorial with just a single pair on smaller lakes, though in a few locations where a large area of suitable feeding habitat is found they can be colonial. The largest colonies have over 100 pairs, such as at the colony at Abbotsbury Swannery in southern England, and at the southern tip of Öland Island, Ottenby Preserve, in the coastal waters of the Baltic Sea, and can have nests spaced as little as 2 metres (7 ft) apart.[17][19] Non-mated juveniles up to 3–4 years old also commonly form larger flocks, which can total several hundred birds, often at regular traditional sites.[20] A notable flock of non-breeding birds is found on the River Tweed estuary at Berwick-upon-Tweed in northeastern England, with a maximum count of 787 birds.[21] Once the adults are mated they seek out their own territories and often live close to ducks and gulls, which may take advantage of the swan's ability to reach deep water weeds, which tend to spread out on the water surface.

The Mute Swan is less vocal than the noisy Whooper and Bewick's Swans; the most familiar sound associated with Mute Swan is the vibrant throbbing of the wings in flight. This sound is unique to the species, and can be heard from a range of 1 to 2 kilometres (0.6 to 1 mi), indicating its value as a contact sound between birds in flight.[17] They do however make a variety of grunting, hoarse whistling, and snorting noises, especially in communicating with their cygnets, and usually hiss at predators trying to enter their territory. 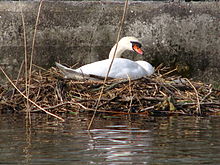 Although this bird can be tame, especially to those who feed it daily, it is aggressive in defence of its nest, and its size and impressive hissing make it a formidable adversary for animals as large as a fox. Large waterfowl, such as Canada Geese may be driven off, and there have been many reports of Mute Swans attacking people who enter their territory. The cob is also responsible for defending the cygnets while on the water, and will sometimes attack small watercraft, such as canoes, that it feels are a threat to its young. The cob will also try and chase the predator out of his family territory, and will keep animals such as foxes and birds at bay.

The familiar pose with neck curved back and wings half raised, known as busking, is a threat display, mainly shown by males but also females to a small extent. Black Swans and Whooper Swans are less aggressive and are not as defensive against predators. Trumpeter Swans will sometimes leave their nests if threatened. Mute Swans will attack land animals in defense of their families, during the period before fledging of their offspring[vague] (which, at six months, is longer than that of most other birds).[citation needed]

The Mute Swan is found naturally mainly in temperate areas of Europe across western Asia, as far east as the Russian Maritimes, near Sidemi.[22] Gmelin (1789) and John Latham (1824)[12] reported Mute Swans present in Kamchatka in the 18th century.

It is partially migratory throughout northern latitudes in Europe and Asia, as far south as north Africa and the Mediterranean. It is known and recorded to have nested in Iceland and is a vagrant to that area, as well as to Bermuda, according to the U.N. Environmental Programme chart of international status chart of bird species, which places it in 70 countries, breeding in 49 countries, and vagrant in 16 countries. While most of the current population in Japan is introduced, Mute Swans are depicted on scrolls more than a thousand years old, and wild birds from the mainland Asian population still occur rarely in winter. Natural migrants to Japan usually occur along with Whooper and sometimes Bewick's Swans.

The Mute Swan is protected in most of its range, but this has not prevented illegal hunting and poaching. It is often kept in captivity outside its natural range, as a decoration for parks and ponds, and escapes have happened. The descendants of such birds have become naturalised in the eastern United States and Great Lakes, much as the Canada Goose has done in Europe.

The total native population of Mute Swans is about 500,000 birds at the end of the breeding season (adults plus young), of which 350,000 are in the former Soviet Union.[2] The largest single breeding concentration is 11,000 pairs in the Volga Delta.[3]

Populations in western Europe were largely exterminated by hunting pressure in the 13th-19th centuries, with the exception of semi-domesticated birds maintained as poultry by large landowners. Better protection in the late 19th and early 20th centuries allowed birds to return to most or all of their former range.[25][26] More recently in the period from about 1960 up to the early 1980s, numbers declined significantly again in many areas, primarily due to lead poisoning from birds swallowing discarded fishing sinkers made from lead. After lead weights were replaced by other less toxic alternatives, Mute Swan numbers increased again rapidly.[3]

Mute Swans have been introduced into North America and the increase in numbers has deemed it to be an invasive species. Other introduced populations are small, with around 200 in Japan, less than 200 in New Zealand and Australia, and about 120 in South Africa.[2]

The Mute Swan was introduced to North America in the late 19th century, primarily for its ornamental value.[citation needed] Recently, it has been widely viewed as an invasive species because of its rapidly increasing numbers and impacts on other waterfowl and native ecosystems. For example, a study of population sizes in the lower Great Lakes from 1971 to 2000 found that Mute Swan numbers were increasing at an average rate of at least 10% per year, doubling the population every seven to eight years.[27] Several studies have concluded that Mute Swans severely reduce densities of submerged vegetation where they occur.[28]

In 2003, the U.S. Fish and Wildlife Service proposed to "minimize environmental damages attributed to mute swans" by reducing their numbers in the Atlantic Flyway to pre-1986 levels, a 67% reduction at the time. According a report published in the Federal Register of 2003[29] the proposal was supported by all thirteen state wildlife agencies which submitted comments as well as by 43 bird conservation, wildlife conservation and wildlife management organisations. Ten animal rights organisations and the vast majority of comments from individuals were opposed. At this time Mute Swans were protected under the Migratory Bird Treaty Act due to a court order, but in 2005 the United States Department of the Interior officially declared them a non-native, unprotected species.[30] Mute Swans are protected in some areas of the U.S. by local laws, as for example in Connecticut.[31]

The status of the Mute Swan as an introduced species in North America is disputed by the pressure group "Save The Mute Swans", who produced a variety of claims to support their stance that Mute Swans are native in the region and therefore deserving of protection.[32] These claims are specifically rejected by the U.S. Department of the Interior as specious.[30]

The Mute Swan had absolute protection in New Zealand under the Wildlife Act 1953 but this was changed in June 2010 to a lower level of protection. It still has protection but is now able to be killed or held in captivity at the discretion of the Minister of Conservation.[33] 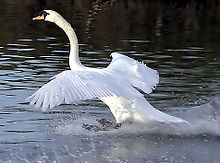 Mute Swan at the moment of landing