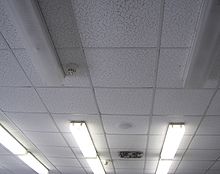 Dropped ceiling, after installation. Light fixtures, a speaker grill, smoke detectors, and an air grill are all visible. 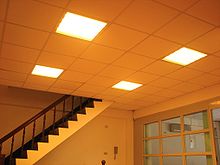 A dropped ceiling is a secondary ceiling, hung below the main (structural) ceiling. They may also be referred to as a drop ceiling, false ceiling, or suspended ceiling, and are a staple of modern construction and architecture. The area above the dropped ceiling is called the plenum space, as it is sometimes used for HVAC air return. The plenum space is also very commonly used to conceal piping, wiring, and/or ductwork.

A typical dropped ceiling consists of a grid-work of metal channels in the shape of an upside-down "T", suspended on wires from the overhead structure. These channels snap together in a regularly spaced pattern – typically a 2×2 or 2×4 foot grid in the US, or 600×600 mm grid in Europe (this is the modular size of the grid, the tiles are actually 595mm x 595mm or 595mm x 1195mm). Each cell is filled with lightweight "tiles" [2] or "panels" which simply drop into the grid. Tiles can be selected with a variety of materials, including wood, metal, plastic, or mineral fibres, and can come in almost any color. Light fixtures, HVAC air grilles, and other fixtures are available which can fit the same space as a tile for easy installation. Most tile material is easily cut to allow fixtures in other shapes, such as incandescent lights, speakers, and fire sprinkler heads.

The suspended ceiling was originally developed to conceal the underside of the floor above and to offer acoustic balance and control in a room. The acoustic performance of suspended ceilings has improved dramatically over the years, with enhanced sound absorption and attenuation. This is sometimes achieved by adding insulation known as Sound Attenuation Batts (SABs), more commonly referred to as "sound batts", above the panels to help deaden sounds and keep adjacent rooms quieter.

Interlocked panels can be "slid" across and out of the grid

An older, less common type of dropped ceiling is the concealed grid system. This type of dropped ceiling employs a method of interlocking panels into each other and the grid with the use of small strips of metal called 'splines', thus making it difficult to remove panels to gain access above the ceiling without damaging the installation or the panels. Normally, these type of ceilings will have a "key panel" (usually in the corner) which can be removed, allowing for the other panels to be slid out of the grid (a series of metal channels called 'z bars') one by one, until eventually removing the desired panel. This type of ceiling is more commonly found in older installations or installations where access to above the ceiling is generally considered unnecessary.

This system has some major disadvantages compared to the more common "drop panel" system, most notably the difficulty in removing and reattaching panels from the grid, which in some cases can cause irreparable damage to the panels removed. Finding replacement panels for this type of dropped ceiling is becoming increasingly more difficult as demand for them is slowing, as is production of the parts. Small clips are still available which allow tiles to be inserted into gaps in the ceiling where a tile is missing, they work by being placed on the edge of a concealed tile, then being slid along as the tile is placed to 'lock' it in place. 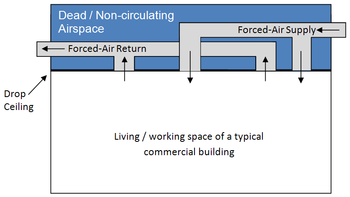 A commercial building without a plenum airspace. 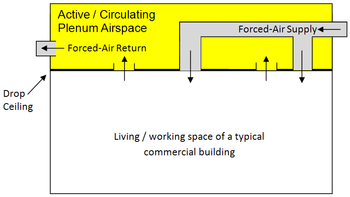 A commercial building with a plenum airspace. 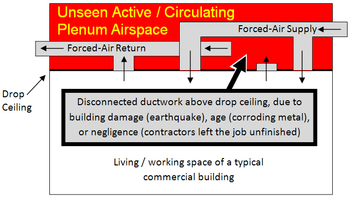 A plenum created by accident can go unnoticed and become a fire hazard, due to cabling being installed under the assumption that this will always be a non-plenum airspace.

The space above the dropped ceiling is often used as a plenum air return for ventilation systems, requiring only enclosed ducts that deliver fresh air into the room below. Return air enters the ceiling space through open grilles across the ceiling.

In the event that the dropped ceiling is used as a plenum, low-voltage cables and wiring not installed inside conduit need to use a special low-smoke and low-toxicity wire insulation which will tend to char and stop burning on its own. This helps to protect building occupants so that they are not poisoned with toxic chemicals sucked through the ventilation system in the event of a fire, and helps to prevent fires from spreading inside the hidden plenum space. This special low-smoke cable is typically referred to as plenum cable or Low Smoke Zero Halogen (LSZH or LS0H) cable. While networking cable is the most common form of plenum cable, coaxial cable and telephone cable also needs to be plenum-rated for safety.

High-voltage electrical equipment (generally regarded as being over 50 volts) is not permitted to be exposed in the plenum space above a drop ceiling. High voltage wiring must be enclosed in conduit or raceways, and must be physically isolated from low-voltage wiring. High voltage electrical devices similarly must be enclosed in a plenum space, inside a metallic container. Similarly, electrical outlets for domestic powered devices are not permitted inside the plenum space, though outlets can be installed on ceiling tiles inside electrical boxes, with the sockets exposed on the exterior bottom face of the drop ceiling. The purpose of these restrictions is to limit flame spread inside the unseen plenum space, in the event of high voltage equipment or wiring failure. Low voltage cabling is permitted because current flow is typically negligible so the risk of overheating and fire is limited.

In commercial and industrial settings, this allows the obscuring of fittings above the ceiling and access at any time. Drop ceilings may also be used in settings where obscuring fittings or the actual ceiling itself is desirable when wanting to hide problems, such as structural damage. Older, white panels combined with fluorescent lighting are common in many offices, and considered utilitarian, if not unpleasant by some people. More expensive, modern dropped ceiling styles are gaining popularity. Manufacturers are creating suspended ceilings that are designed to be independent from the exterior walls and just be hung from the soffit; resulting in an aesthetically pleasing look whilst maintaining their ability to aid acoustics in room or large area.

If fire safety is a factor, ceiling tiles made from mineral fibres, or fire-rated wood panels can be used within the construction to meet acceptable standards/ratings. These same tiles can provide the needed additional resistance to meet the "time rating" required for various fire code, city ordinance, commercial, or other similar building construction regulations. Fire ratings for ceiling panels vary based on the materials used and preparation of each panel. In the UK it can be required for the tiles from certain manufacturers to be clipped into the grid with special ceiling clips in order to provide a fire rating; there are special tiles designed for the underside of mezzanine floors however that can give a fire rating without being clipped.

Another advantage of a dropped ceiling is that the easily-removed ceiling panels offer instant access to the plenum, greatly simplifying repairs or alterations.

Wiring and piping installed behind traditional plaster or wallboard ceilings is extremely difficult to modify once the finished ceiling is in place. Wires must either be fished through hollow spaces in the walls behind the finished ceiling, or the ceiling must be demolished in order for wiring or piping changes to be made.

In contrast, the tiles and other parts of a drop ceiling are easily removed to allow access to the area above the grid to do any necessary wiring or plumbing modifications. In the event of remodeling, nearly all components of the grid can be dismantled and reassembled somewhere else.

In business, the drop ceiling is often used in conjunction with hollow steel studs to construct small office spaces out of a much larger cavernous space. Wiring and other services are run through the open ceiling, down through the hollow stud walls, and to outlets in the work areas. If business needs change, the office spaces are easily dismantled and the overall cavernous space reconfigured with a different floorplan.

A panel broken from removal

One disadvantage with this ceiling system is reduced headroom. Clearance is required between the grid and any pipes or ductwork above to install the ceiling tiles and light fixtures. In general, a minimum clearance of four to eight inches is often needed between the lowest obstruction and the level of the ceiling grid.

Dropped ceilings are frequently used by slumlords to hide structural and cosmetic damage, loose wiring, insect/rodent infestation, avoiding the need to carry out any repairs or maintenance. Additionally, sometimes walls do not extend past the grid to the actual ceiling. This can present a security risk when used in offices or areas where unauthorized entry may be an issue.

As a renovation tool, dropped ceilings are a quick and inexpensive way to repair a ceiling or reduce HVAC costs, however they tend to show their age quickly— they are sometimes discolored by excessive smoking, sag in the center, and are damaged easily. In older buildings that have seen multiple renovations over time, it is not uncommon for a dropped ceiling to have been installed in one renovation and then subsequently removed in another, its installation having been an inexpensive fix to prolong the time between major renovations.