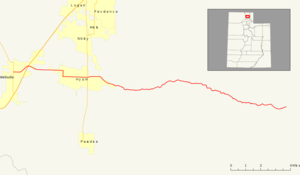 Located entirely in Cache County, SR-101 starts at an intersection of Main Street and SR-23 (Center Street). The highway heads easterly for the first convert|0.4|mi|km|abbr=on|sing=on before it turns northeasterly, crossing the and intersects US-89/US-91 at a controlled at-grade interchange. After the interchange, SR-101 turns to the southeast after entering Wellsville city limits. At 400 West, SR-101 turns south for 3 blocks before turning back to the east, and intersecting SR-165.

After leaving Hyrum, SR-101 dips to the southeast again, entering the and a canyon formed by the Blacksmith Fork River. The final convert|13.9|mi|km|abbr=on are inside the forest, serving as an access route to several campgrounds, as well as a , and electric plant. The route comes to an end at the , a working ranch owned and run by the state of Utah.

SR-101 was formed in 1931 as a loop off SR-1 (now US-91) from Logan south to Hyrum and west to Wellsville. [cite UTSR law|year=1931|quote=(101) From Logan southerly via Hyrum to Wellsville.] The road from Hyrum east to the Hardware Ranch was added to the state highway system in 1949 as State Route 242, [cite UTSR law|year=1949|quote="Route 242. From Hyrum on route 101 easterly via Blacksmith Fork approximately 17 miles to the ranch house on the state fish and game property known as the Hardware Ranch."] and that route was extended south to SR-39 in 1965.

On November 25, 2006, a car failed to turn with a curve on the highway outside of Hyrum and ran off the road into the Blacksmith Fork River. The driver, who was not wearing his , was pronounced dead at the nearby after emergency crews extracted him from his vehicle. The passenger survived, after escaping the submerged vehicle on their own.