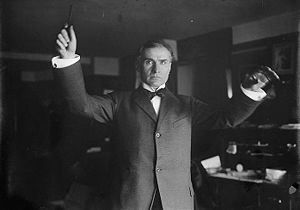 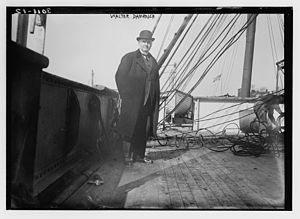 Walter Johannes Damrosch (January 30, 1862 – December 22, 1950) was a German-born American conductor and composer. He is best remembered today as long-time director of the New York Symphony Orchestra and for conducting the world premiere performances of George Gershwin's Piano Concerto in F (1925), and An American in Paris (1928).

Walter Damrosch was born in Breslau, Silesia, a son of the conductor Leopold Damrosch and brother of Frank Damrosch. He exhibited an interest in music at an early age and was instructed by his father in harmony and also studied under Wilhelm Albert Rischbieter and Felix Draeseke at the Dresden Conservatory. He emigrated with his parents in 1871 to the United States.

During the great music festival given by his father in May 1881, he first acted as conductor in drilling several sections of the large chorus, one in New York City, and another in Newark, New Jersey. The latter, consisting chiefly of members of the Harmonic Society, elected him to be their conductor. During this time a series of concerts was given in which such works as Anton Rubinstein's Tower of Babel, Hector Berlioz's La damnation de Faust, and Giuseppe Verdi's Requiem were performed. He was then only 19 years of age, but showed marked ability in drilling large masses.

In 1884, when his father initiated a run of all-German opera at the Metropolitan Opera in New York, Walter was made an assistant conductor. After his father's death in 1885, he held the same post under Anton Seidl and also became conductor of the Oratorio and Symphony Societies in New York.

On May 17, 1890, he married Margaret Blaine (1867–1949), the daughter of American politician and presidential candidate James G. Blaine. They had four daughters.

Damrosch was best known in his day as a conductor of the music of Richard Wagner and was also a pioneer in the performance of music on the radio, and as such became one of the chief popularizers of classical music in the United States. At the request of General Pershing he reorganized the bands of the A.E.F. in 1918.[1]

One of his principal achievements was the successful performance of Parsifal, perhaps the most difficult of Wagner's operas, for the first time in the United States, in March 1886, by the Oratorio and Symphony societies. During his visit to Europe in the summer of 1886, he was invited by the Deutsche Tonkünstler-Verein, of which Franz Liszt was president, to conduct some of his father's compositions at Sondershausen, Thuringia. Carl Goldmark's opera Merlin was produced for the first time in the United States under Damrosch's direction, at the Metropolitan Opera House, 3 January 1887. 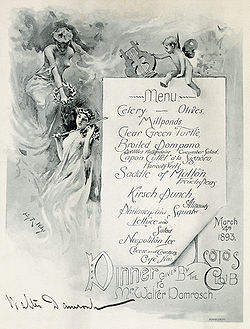 A dinner menu from 1893 containing Walter Damrosch's signature from a dinner in his honor.

Although now remembered almost exclusively as a conductor, before his radio broadcasts Damrosch was equally well known as a composer. He composed operas based on stories such as The Scarlet Letter (1896), Cyrano (1913), and The Man Without a Country (1937). Those operas are very seldom performed now. His Wagner recordings are still widely available. He also composed songs such as the intensely dramatic Danny Deever.[2]

Damrosch was the National Broadcasting Company's music director under David Sarnoff, and from 1928 to 1942, he hosted the network's Music Appreciation Hour, a popular series of radio lectures on classic music aimed at students. (The show was broadcast during school hours, and teachers were provided with textbooks and worksheets by the network.) According to former New York Times critic Harold C. Schonberg in his collection Facing the Music, Damrosch was notorious for making up silly lyrics for the music he discussed in order to "help" young people appreciate it, rather than letting the music speak for itself . An example: for the first movement of Franz Schubert's Unfinished Symphony, the lyric went

This is the symphony,
That Schubert wrote and never finished.

Although Damrosch took an interest in music technologies, he recorded sporadically. His first recording, the prelude to Bizet's Carmen, appeared in 1903 (on Columbia, with a contingent of the New York Symphony credited as the "Damrosch Orchestra"). He recorded very few extended works; the only symphony he recorded was Brahms's Second with the New York Symphony shortly before the orchestra merged with the New York Philharmonic (again for Columbia, in 1928), and he recorded the complete ballet music from the opera Henry VIII by Camille Saint-Saëns, with the National Symphony Orchestra of Washington, D.C., for RCA Victor in the early 1930s.

Walter Damrosch died in New York City in 1950. Damrosch Park at Lincoln Center is named in his honor. The public school P186x The Walter J. Damrosch School in the Bronx is named after him.

Damrosch is often remembered today as the target of Theodore Wiesengrund Adorno's criticism.[3] Adorno, without always naming Damrosch, wrote during his rather unhappy tenure at the "Princeton Radio Research Project", funded by Sarnoff's RCA, that the Damrosch approach towards popularizing classical music was infantilizing and authoritarian, and part of a broader, if not centrally planned, system of domination.

Adorno showed ways of teaching both children and adults about classical music that would describe its form simply, whereas Damrosch focused on being able to identify pictures of composers, instruments, and the bare bones of symphonic themes. Adorno's criticism, regarded by some of his colleagues as ground-breaking and by others as pedantic (and by some as both) resulted in his being eased out of the Radio Research Project. Adorno contrasted what he considered a dead end (being able to whistle the theme of the Fifth Symphony) with the child who hears a string quartet in the next room and cannot sleep because the music holds his attention.

Today, despite Adorno's popularity in literary studies, his criticism of Damrosch is regarded by musicians and musicologists as an historical curio. It should be noted, however, that, through no fault of Adorno, classical music broadcasting and listening is today at an all-time low in the USA, meaning that RCA's goals for the Princeton Radio Research project, and Damrosch's pedagogy, failed to accomplish their stated goals.

Adorno felt that Damrosch's musical pedagogy was a justification of class oppression, in which the conductor, without actually "working" at least in the sense that the musicians "work", is shown as "above" the mere musicians, none of whom can be said to play other than a part. Without claiming that the symphony orchestra was completely a product of capitalism (while pointing out that to be economically viable it had to find a place in exchange), Adorno saw the Radio Research Project and Damrosch as introducing, to children and working class adults, a justification of alienation and oppression.

If Adorno was right, this may have caused the rejection by the public of classical music that began in the Depression (with its images of well-fed opera goers passing starving men) and gathered steam in the "big band" era of the 1940s, in which the "jazz" fan defined himself in part as too "hip" to like the music of "squares", negatively, without in fact any special love or understanding for what Adorno overbroadly called "jazz".

According to Hullot-Kentor [4], most music on radio in the 1920s was European and classical. Of course, it has rapidly and continuously declined, which shows that the "Damrosch" approach to musical pedagogy was a dead end, since it was so widely adopted in schools.

Perhaps the funniest, if untargeted, comment on the whole situation was made by New York Yankees catcher Yogi Berra, famous for gnomic aphorisms: "I would like to go back to college and study. But I would not study music appreciation. I already like music".

In April 1905 Damrosch went to France and Belgium looking for musicians for the New York Symphony Orchestra, which he directed from 1885 to 1928. He engaged five musicians: oboist Marcel Tabuteau, flutist Georges Barrère, bassoonist Auguste Mesnard, and clarinetist Leon Leroy from France, and trumpeter Adolphe Dubois from Belgium. Damrosch was fined by the musician's union for not advertising for musicians from New York, but the emigrating musicians were allowed to stay.[5][6][7][8][9] In addition to achieving the intended effect of improving the quality of the New York Symphony Orchestra, Damrosch brought the United States five extremely fine musicians. Tabuteau (q.v.) was particularly influential. He served as principal oboist of the Philadelphia Orchestra from 1915 to 1954 under Leopold Stokowski and, just as importantly, taught in Philadelphia at the Curtis Institute of Music. Laila Storch wrote, "During the thirty years during which Tabuteau taught at the Curtis Institute of Music, he came to exercise a decisive influence on the standards of oboe playing in the whole United States, as well as raising the level of woodwind achievement in general. Nor was the impact of his teaching confined to winds alone, as the many string players and pianists who attended his classes will testify."[10] Barrère was well known as conductor of his own ensembles and as an influential teacher as well as for being the long-time principal flute player (1905—1928) in the New York Symphony Orchestra. Although perhaps less known, the other three Damrosch imports were important additions to the pool of New York musicians. Mesnard (from 1913—1928) and Leroy (from 1911—1914) were principal players in the New York Philharmonic after leaving the New York Symphony Orchestra.[11] Nathaniel Shilkret's payrolls show Mesnard played in Shilkret's orchestras for more than thirty radio broadcasts.