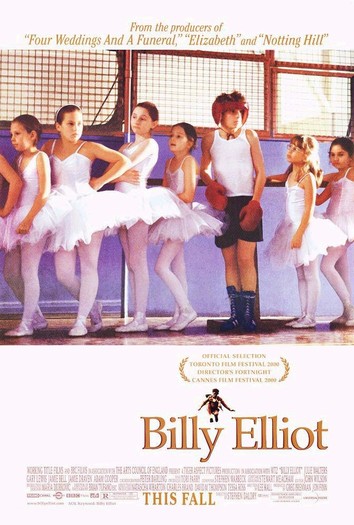 "Billy Elliot" is a 2000 written by Lee Hall and directed by . Set in the fictional town of 'Everington' in the real , , it stars as 11-year-old Billy, an aspiring dancer, Gary Lewis as his father, as Billy's older brother, and as his dance instructor. In 2001, author was commissioned to write the novelisation of the film based on Lee Hall's screenplay. The story was adapted for the West End stage as "" in 2005, which will open on Broadway in 2008.

Billy () is a boy living in . His father, Jackie (Gary Lewis), and older brother, Tony () are striking miners during the .

Billy's father is an admirer of real life world champion , and hopes that Billy would become a champion boxer. Billy, however, is more interested in music, a passion he inherited from his late mother.

Billy is taken to the gym by his father, but he finds out that he doesn't really like the sport, and has no real talent for it. Part of the boxing gym is used by a class because their usual studio in the basement of the sports center is being used as a soup kitchen for the striking miners. He is drawn in by the dance instructor (), and with her help, secretly starts taking ballet class.

As a consequence of Billy's brother being arrested, he misses an important audition for the . His dance instructor goes to their house to tell his father about the missed opportunity. Billy's father and brother, fearing that Billy will be seen as a "poof", become outraged at the idea of him becoming a professional ballet dancer.

Once having seen Billy dance however, his father understands that ballet is Billy's passion and he takes him to an audition in himself. Billy is accepted and moves to London on his own at age 11 to attend the school.

The movie concludes with a scene that takes place 14 years later, where his father and brother see Billy dancing. The film ends as the older and more mature Billy (dancer/actor Adam Cooper) takes the stage to perform the lead in 's "Swan Lake".

The film was nominated and won awards worldwide including the following.