Microfluidics deals with the behavior, precise control and manipulation of fluids that are geometrically constrained to a small, typically sub-millimeter, scale. Typically, micro means one of the following features:

It is a multidisciplinary field intersecting engineering, physics, chemistry, microtechnology and biotechnology, with practical applications to the design of systems in which such small volumes of fluids will be used. Microfluidics emerged in the beginning of the 1980s and is used in the development of inkjet printheads, DNA chips, lab-on-a-chip technology, micro-propulsion, and micro-thermal technologies. 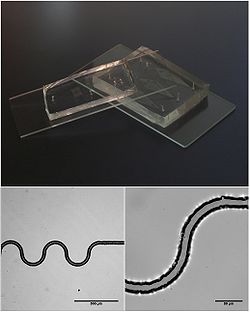 The behavior of fluids at the microscale can differ from 'macrofluidic' behavior in that factors such as surface tension, energy dissipation, and fluidic resistance start to dominate the system. Microfluidics studies how these behaviors change, and how they can be worked around, or exploited for new uses.[1][2][3][4]

At small scales (channel diameters of around 100 nanometers to several hundred micrometers) some interesting and sometimes unintuitive properties appear. In particular, the Reynolds number (which compares the effect of momentum of a fluid to the effect of viscosity) can become very low. A key consequence of this is that fluids, when side-by-side, do not necessarily mix in the traditional sense; molecular transport between them must often be through diffusion.[5]

Advances in microfluidics technology are revolutionizing molecular biology procedures for enzymatic analysis (e.g., glucose and lactate assays), DNA analysis (e.g., polymerase chain reaction and high-throughput sequencing), and proteomics. The basic idea of microfluidic biochips is to integrate assay operations such as detection, as well as sample pre-treatment and sample preparation on one chip.[10][11]

An emerging application area for biochips is clinical pathology, especially the immediate point-of-care diagnosis of diseases. In addition, microfluidics-based devices, capable of continuous sampling and real-time testing of air/water samples for biochemical toxins and other dangerous pathogens, can serve as an always-on "bio-smoke alarm" for early warning.

These technologies are based on the manipulation of continuous liquid flow through microfabricated channels. Actuation of liquid flow is implemented either by external pressure sources, external mechanical pumps, integrated mechanical micropumps, or by combinations of capillary forces and electrokinetic mechanisms.[12][13] Continuous-flow microfluidic operation is the mainstream approach because it is easy to implement and less sensitive to protein fouling problems. Continuous-flow devices are adequate for many well-defined and simple biochemical applications, and for certain tasks such as chemical separation, but they are less suitable for tasks requiring a high degree of flexibility or ineffect fluid manipulations. These closed-channel systems are inherently difficult to integrate and scale because the parameters that govern flow field vary along the flow path making the fluid flow at any one location dependent on the properties of the entire system. Permanently etched microstructures also lead to limited reconfigurability and poor fault tolerance capability.

Process monitoring capabilities in continuous-flow systems can be achieved with highly sensitive microfluidic flow sensors based on MEMS technology which offer resolutions down to the nanoliter range.

Alternatives to the above closed-channel continuous-flow systems include novel open structures, where discrete, independently controllable droplets are manipulated on a substrate using electrowetting. Following the analogy of digital microelectronics, this approach is referred to as digital microfluidics. Le Pesant et al. pioneered the use of electrocapillary forces to move droplets on a digital track.[14] The "fluid transistor" pioneered by Cytonix[15] also played a role. The technology was subsequently commercialized by Duke University. By using discrete unit-volume droplets,[16] a microfluidic function can be reduced to a set of repeated basic operations, i.e., moving one unit of fluid over one unit of distance. This "digitization" method facilitates the use of a hierarchical and cell-based approach for microfluidic biochip design. Therefore, digital microfluidics offers a flexible and scalable system architecture as well as high fault-tolerance capability. Moreover, because each droplet can be controlled independently, these systems also have dynamic reconfigurability, whereby groups of unit cells in a microfluidic array can be reconfigured to change their functionality during the concurrent execution of a set of bioassays. Although droplets are manipulated in confined microfluidic channels, since the control on droplets is not independent, it should not be confused as "digital microfluidics". One common actuation method for digital microfluidics is electrowetting-on-dielectric (EWOD). Many lab-on-a-chip applications have been demonstrated within the digital microfluidics paradigm using electrowetting. However, recently other techniques for droplet manipulation have also been demonstrated using Surface Acoustic Waves, optoelectrowetting, mechanical actuation,[17] etc.

Early biochips were based on the idea of a DNA microarray, e.g., the GeneChip DNAarray from Affymetrix, which is a piece of glass, plastic or silicon substrate on which pieces of DNA (probes) are affixed in a microscopic array. Similar to a DNA microarray, a protein array is a miniature array where a multitude of different capture agents, most frequently monoclonal antibodies, are deposited on a chip surface; they are used to determine the presence and/or amount of proteins in biological samples, e.g., blood. A drawback of DNA and protein arrays is that they are neither reconfigurable nor scalable after manufacture. Digital microfluidics has been described as a means for carrying out Digital PCR.

In addition to microarrays biochips have been designed for two-dimensional electrophoresis,[18] transcriptome analysis,[19] and PCR amplification.[20] Other applications include various electrophoresis and liquid chromatography applications for proteins and DNA, cell separation, in particular blood cell separation, protein analysis, cell manipulation and analysis including cell viability analysis and microorganism capturing.[11] 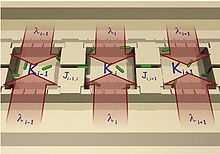 By combining microfluidics with landscape ecology and nanofluidics, a nano/micro fabricated fluidic landscape can be constructed by building local patches of bacterial habitat and connecting them by dispersal corridors. The resulting landscapes can be used as physical implementations of an adaptive landscape,[21] by generating a spatial mosaic of patches of opportunity distributed in space and time. The patchy nature of these fluidic landscapes allows for the study of adapting bacterial cells in a metapopulation system. The evolutionary ecology of these bacterial systems in these synthetic ecosystems allows for using biophysics to address questions in evolutionary biology.

The ability to create precise and carefully controlled chemoattractant gradients makes microfluidics the ideal tool to study motility and chemotaxis of microorganisms, including bacteria [22] and the broad range of organisms that form the marine microbial loop[23], responsible for regulating much of the oceans' biogeochemistry.

By rectifying the motion of individual swimming bacteria,[24] microfluidic structures can be use to extract mechanical motion from a population of motile bacterial cells.[25] This way, bacteria-powered rotors can be built.[26][27]

The merger of microfluidics and optics is typical known as optofluidics. An example of an optofluidic device is a Tuneable Microlens Array[28][29]

Acoustic droplet ejection uses a pulse of ultrasound to move low volumes of fluids (typically nanoliters or picoliters) without any physical contact. This technology focuses acoustic energy into a fluid sample in order to eject droplets as small as a millionth of a millionth of a liter (picoliter = 10−12 liter). ADE technology is a very gentle process, and it can be used to transfer proteins, high molecular weight DNA and live cells without damage or loss of viability. This feature makes the technology suitable for a wide variety of applications including proteomics and cell-based assays.

For more details on this topic, see Electroosmotic pump.

Microfluidic fuel cells can use laminar flow to separate the fuel and its oxidant to control the interaction of the two fluids without a physical barrier as would be required in conventional fuel cells.[30][31][32]

In recent times, developing nations are adopting clay based ceramic water filters for cost effective water filtration. These water filters made from molds manufactured by mixing clay and waste plant materials such as rice husk, sawdust,dried plant biomass etc. in some volumetric or weight proportions. These vessels are in use from very early ages in Africa and Asia. The initial water percolation through there clay pots are alkaline. Recently it was found that this alkaline nature can be easily predicted by use of simple models incorporating micro/nano fluid transport processes such as Capillary Osmosis, Thermo Osmosis, Electro-osmosis and Discharge from these clay ceramic devices.[33]

A tool for cell biological research

Microfluidic technology is creating powerful tools for cell biologists to control the complete cellular environement, leading to new questions and new discoveries.[34] We can list here diverse advantages for microbiology of these tools: