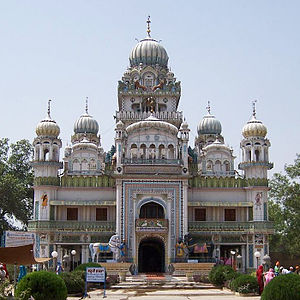 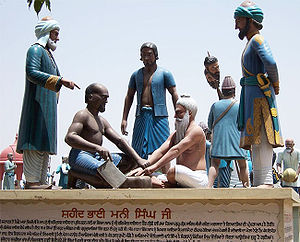 Gurdwara Mehdiana Sahib, also called the 'School of Sikh History'[1] is a Sikh Gurdwara located in the village of Mehdiana, just outside Manuke, near Jagraon in Ludhiana district, India[2].

Sikhs believe the site of the gurdwara to be where Guru Gobind Singh and his followers rested after the Battle of Chamkaur against the Imperial Mughal armies of Aurangzeb and where he was requested by his followers or the Sangat to write the Zafarnama[3].

The gurdwara is known for its uniquely coloured architecture and monuments depicting important events in Sikh history[1]. Additionally, the Dhaab (natural water reservoir), greenery, birds and trees made Mehdiana Sahib popular with pilgrims[2]. Today parts of the Gurdwara have become dilapidated due to a lack of funds resulting from its isolated location and private ownership status[1]

In 1705 Mughal armies under Aurangzeb laid siege to Anandpur Sahib intent on reducing the influence of Gobind Singh and the Khalsa. During the siege Aurangzeb sent a signed letter to Gobind Singh offering safe passage out of Anandpur. Pressed by his followers and family he accepted and evacuated Anandpur on 20–21 December 1705.

Gobind Singh, his two eldest sons (Sahibzada Jujhar Singh and Sahibzada Ajit Singh) and thirty-eight followers arrived at Chamkaur, where they were granted shelter. Despite assurance from Aurangzeb of safe passage a contingent of the imperial army was sent to lay siege to the haveli. Vastly outnumbered Gobind Singh was disguised as another Sikh and escaped with only three others including Bhai Daya Singh and Bhai Dharam Das.

Gobind Singh reached Mehdiana after gathering support from across the Malwa region passing through the villages of Raikot, Lamme Jattpure & Manuke before finally reaching Mehdiana[3]. The nearest habitation at the time was almost 3 miles (4.8 km) away so Gobind Singh and his followers rested by cleaned their teeth using tree twigs (Daatan) and bathed in the water (Daab)[3]. While Gobind Singh was meditating Bhai Daya Singh asked what they should do next. Gobind Singh's reply encouraged his followers to have faith in God’s will as they had done no wrong.

"Bhai Daya Singh I have returned the Debt and have become victorious. Singh and Tiger are kings of the same jungle. Singhs should keep faith in the Almighty."

Still distressed Bhai Daya Singh again repeated his requested, on behalf of all Sikhs (Sangat). Gobind Singh's reply showed that despite being Guru to the Sikhs Gobind Singh was only a mortal man and that in reality he was a servant to God and the Sangat [4]. The quote refers to the execution Gobind Singh’s farther and proceeding Sikh Guru Tegh Bahadur for opposing forced conversion to Islam of Kashmiris by Aurangzeb[5]

Discussions about the future of the Sikhs continued until on Sangat's request Gobind Singh began to prepare his mind to begin writing the Zafarnamah [4]. Gobind Singh went to the village Chakkar that night and the next day travelled to Deena Sahib to stay with Lakhmir and Shamir; after gathering support at the villages Takhtupura and Madhe. In Chakkar he wrote the Zafarnama and sent it to Aurangzeb in Aurangabad with Bhai Daya Singh and Bhai Dharam Das[3].

For this reason pilgrims claim that Mehdiana Sahib has Gobind Singh’s blessing and that visiting will mean their prayers will not go unanswered[3].

Before late 1960s the Mehdiana complex looked like a forest with dense trees and bushes growing all around the place of worship. The gurdwara was not developed and maintained properly and there was no habitation within a distance of two to three miles (5 km). Later Jathedar Jora Singh Lakha took the responsibility for its development and made Mehdiana Sahib a popular destination for pilgrims. In 1972, when Lakha started the work, only a few acres were attached to the gurdwara but slowly the gurdwara complex covered 25 acres (100,000 m2).

In the vicinity of this gurdwara are the sculptures and statues of Sikh warriors who not only laid their lives for the sake of the religion but also endured torture at the hands of the Mughals. These statues depict soldiers, women and children being cut to pieces. Some sculptures show Bhai Kanhaiya, one of the soldiers of Guru Gobind Singh, serving water not only to the wounded soldiers in their own army but also to wounded enemy soldiers. Through these sculptures Lakha not only aimed to depict history but also to educate people that religion was more important than their lives. He felt it was better to sacrifice one's life than to accept injustice and cruelty and lose one's self-respect.

He has tried to show that the Sikh religion was born from the sacrifices of our ancestors and that religion should not be taken for granted. The importance of preserving one's self respect and the triumph of good over evil have been beautifully depicted in the sculptures and paintings. 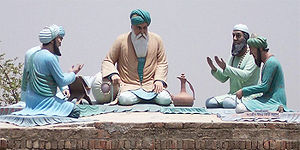 Sculpture of Mian Mir and his followers at Mehdiana Sahib

The gurdwara is a fine specimen of Sikh architecture. Crores of rupees have been spent on its construction. Exquisite meenakari work can be seen here. On the door of the eighth floor of the building is engraved a picture of Bhai Gurdas who is dictating the bagtan di bani to the fifth guru. On the walls of the gurdwara are engraved images of Guru Gobind Singh's deeds along with his hymns and on the main door is shown Bhai Daya Singh Hura holding the horse of the Guru. Inside the main building of gurdwara a beautifully decorated Guru Granth Sahib is kept.

The gurdwara complex has its own Dasmesh Public School[6]. Around 500 children from surrounding villages come in this school. To the right of the gurdwara building is a museum which houses beautiful paintings depicting the journey of Guru Gobind Singh from Patna to Anandpur Sahib. Near the main building of the gurdwara, is Baba Farid's asthan. This asthan looks like a small fort with a beautiful and realistic sculpture of Baba Farid and the pictures of different birds like crows, eagle etc. surrounding him. For the entertainment of children there is a mini zoo which houses rare animals. This zoo is in the form of a fort. There is also a modern sarovar and Langar is served 24 hours a day.