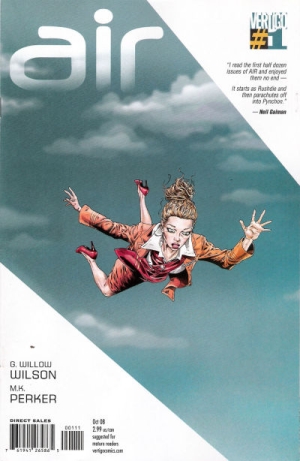 "Air" is the name of an ongoing series published by as part of the Vertigo . It was created by writer and artist .

"Air" is an and G. Willow Wilson explained her plans: "I have a solid detailed topographical map for the first year and a half and a loose hand-written treasure map for another couple of years. If this follows the four year model that has become typical of good Vertigo series lately, I'll be happy, and I've got ideas to fuel the whole run." [ [http://forum.newsarama.com/showthread.php?t=155218 G. Willow Wilson on Air] , , April 28, 2008]

Wilson has also discussed the influences on the story, which partly comes from her non-fiction, journalistic work, but may also have been precipitated by one specific incident: "The concept behind "Air" came from Wilson’s own experiences after being grilled by a flight attendant in Amsterdam for the many visas in her passport." [ [http://www.comicbookresources.com/?page=article&id=17105 G. Willow Wilson talks "Air"] , , July 7, 2008]

Blythe, an acrophobic for the fictional Clearfleet Airlines, is invited to join the "Etesian Front", who claim to be an anti-terrorist organization. The Etesians trick Blythe into transporting plans for a terrorist attack. When she discovers this, she and a man named Zayn are kidnapped and taken on board the plane that is the hijack target. Later, Zayn and Blythe leap clear of the plane as it crashes into the sea. The head of the Etesian Front, a man named Benjamin Lancaster, also survives. Zayn is later accosted by Lancaster in Narimar, a place that ostensibly disappeared from maps during the 1947 , and interrogated as to the whereabouts of an artifact. Blythe follows him to Narimar, where she is designated by the Etesian Front a "hyperpract", that is, someone with the power to move into different dimensions or realities. The three escape Narimar, while their plane is followed by a mysterious winged serpent.

Greg McElhatton, reviewing the first issue for , felt it started too slowly and they were also lukewarm about the art: "It's like a strange cross between early Brandon Peterson and the Pander Brothers, with elongated, exaggerated expressions and strange tousled bunches of hair. It's not bad, but it's also not knocking my socks off either." [ [http://www.comicbookresources.com/?id=316&page=user_review "Air" #1 review] , , August 22, 2008] had a "slugfest" review in which three reviewers had their say on the first issue.

The series is being collected as trade paperbacks: