Phil Gramm
This article is about the American politician. For other persons of the same name, see Philip Graham (disambiguation).

Gramm was born in Fort Benning, Georgia on July 8, 1942, and grew up in nearby Columbus.[1] Soon after his birth, Gramm's father Kenneth suffered a stroke and was partially paralyzed. He died when Gramm was 14. Gramm's mother, Florence Gramm, worked double shifts as a nurse to supplement the veterans disability pension.

In 1976, Gramm unsuccessfully challenged Texas Democratic Senator Lloyd M. Bentsen, in the party's senatorial primary. Then in 1978 Gramm successfully ran as a Democrat for Representative from Texas's 6th congressional district, which stretched from the Fort Worth suburbs to College Station. He was reelected to his House seat as a Democrat in 1980.

Just days after being reelected in 1982, Gramm was thrown off the House Budget Committee for supporting Reagan's tax cuts.[citation needed] In response, Gramm resigned his House seat on January 5, 1983. He then ran as a Republican for his own vacancy in a special election held on February 12, 1983, and won rather handily. One of his opponents was the former and future State Representative Dan Kubiak of Rockdale, Texas. Gramm became the first Republican to represent the district since its creation.

After he left the House the seat was retained for the Republican party by Joe Barton.

In 1984, Gramm was elected as a Republican to represent Texas in the U.S. Senate. He defeated Congressman Ron Paul, former gubernatorial nominee Henry Grover, Robert Mosbacher, Jr., of Houston, and lots of other contenders in the primary. He then faced the Democratic nominee, State Senator Lloyd Doggett of Austin in the general election for the right to succeed retiring Republican Senator John G. Tower. Gramm polled 3,116,348 votes (58.5 percent) to Doggett's 2,207,557 (41.5 percent). Gramm was the first U.S. Senate candidate in the history of Texas to receive more than three million votes.[2]

Gramm served on the Senate Budget Committee from 1989 until leaving office in 2003. Gramm and Senators Fritz Hollings and Warren Rudman devised a means of cutting the budget through across-the-board spending cuts if deficit-reduction targets were not met. They were successful in making the Gramm-Rudman-Hollings Act law, although portions were ruled unconstitutional. In the years following the passage of the Act, other sections were largely superseded by other budget-controlling mechanisms.

In 1990 Gramm failed in an effort to amend the Iraq International Law Compliance Act of 1990. An earlier amendment to the act, the D’Amato Amendment, prohibited the US from selling arms or extending any sort of financial assistance to Iraq unless the President could prove Iraq was in “substantial compliance” with the provisions of a number of human rights conventions, including the Genocide Convention. After reading the D’Amato Amendment, Gramm introduced his own amendment to counter the human rights sanctions in the D’Amato Amendment. Gramm’s amendment would have allowed the Bush administration to waive the terms of the D'Amato Amendment if it found that sanctions against Iraq hurt US businesses and farms more than they hurt Iraq.[3] In the end, the bill passed the Senate without Gramm's amendment only a week before Saddam Hussein invaded Kuwait.

Between 1995 and 2000, Gramm was the chairman of the U.S. Senate Committee on Banking, Housing, and Urban Affairs. During that time he spearheaded efforts to pass banking deregulation laws, including the landmark Gramm-Leach-Bliley Act in 1999, which removed Depression-era laws separating banking, insurance and brokerage activities. 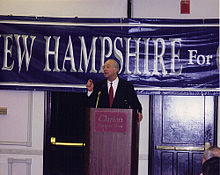 Gramm at a campaign Nashua, New Hampshire in 1995

As a senator, Gramm often called for reductions in taxes and fraud in government spending. He employed his "Dickey Flatt Test" ("Is it worth taking it out of Dickey's pocket?") to determine if federal programs were worthwhile. Richard "Dickey" Flatt owns a family run printing business started by his father and mother in Mexia, Texas, and is a longtime Gramm supporter".[4] In Gramm's eyes, Flatt embodied the burdens that a typical Texas independent small businessman faced in the realm of taxation and government spending.

Gramm ran unsuccessfully for the Republican Party nomination in the 1996 presidential election, for which he had raised $8 million as early as July 1994.[4] Although he began the race with a full war-chest and tied for first place with Dole in the 1995 Iowa Straw Poll, his campaign was fatally wounded when in an upset he lost the Louisiana Caucus on February 7, 1996 to Pat Buchanan (the final delegate count was 13-8). New Orelans Times Picayune political columnist Otis Pike noted the loss could be traced to the passion of the supporters for Buchanan compared to those for Gramm. "Gramm should have won the Louisiana caucuses - but didn't, because the religious right turned out to vote in larger numbers." [5] This poor showing in a state adjacent to Texas plus placing 5th in Iowa's caucuses resulted in Gramm's withdrawal from the contest on the Sunday before the New Hampshire primary. He threw his support to senatorial colleague Robert J. Dole of Kansas. Gramm, a proponent of free trade, also lashed out at Republican Patrick J. Buchanan, arguing that Buchanan was a "protectionist".

After exiting the presidential race, Gramm defeated Victor Morales of Dallas in November 1996 to win his third and final term in the Senate.

Gramm was one of five co-sponsors of the Commodity Futures Modernization Act of 2000.[6] One provision of the bill is often referred to as the "Enron loophole" because some critics blame the provision for permitting the Enron scandal to occur.[7]

In December 2002, Gramm left his Senate seat a few weeks before the expiration of his term in hopes that his successor, fellow Republican John Cornyn, could gain seniority over other newly elected senators. However, Cornyn did not gain additional seniority due to a 1980 Rules Committee policy.[8]

Some economists state that the 1999 legislation spearheaded by Gramm and signed into law by President Clinton — the Gramm-Leach-Bliley Act — was significantly to blame for the 2007 subprime mortgage crisis and 2008 global economic crisis.[9][10] The Act is most widely known for repealing portions of the Glass–Steagall Act, which had regulated the financial services industry.[11] The Act passed the House and Senate by an overwhelming majority on 4 November 1999.[12][13]

Gramm responded in March 2008 to criticism of the act by stating that he saw "no evidence whatsoever" that the sub-prime mortgage crisis was caused in any way "by allowing banks and securities companies and insurance companies to compete against each other."[14]

Gramm's support was later critical in the passage of the Commodity Futures Modernization Act of 2000, which kept derivatives transactions, including those involving credit default swaps, free of government regulation.[15]

In its 2008 coverage of the financial crisis, The Washington Post named Gramm one of seven "Key Players In the Battle Over Regulating Derivatives", for having "[p]ushed through several major bills to deregulate the banking and investment industries, including the 1999 Gramm-Leach-Bliley act that brought down the walls separating the commercial banking, investment and insurance industries".[16]

2008 Nobel Laureate in Economics Paul Krugman, a supporter of Barack Obama and former President Bill Clinton, described Gramm during the 2008 presidential race as "the high priest of deregulation," and has listed him as the number two person responsible for the economic crisis of 2008 behind only Alan Greenspan.[17][18] On October 14, 2008, CNN ranked Gramm number seven in its list of the 10 individuals most responsible for the current economic crisis.[19]

In January 2009 Guardian City editor Julia Finch identified Gramm as one of twenty-five people who were at the heart of the financial meltdown.[20] Time included Gramm in its list of the top 25 people to blame for the economic crisis.[21]

Gramm was co-chair of John McCain’s presidential campaign[22] and his most senior economic adviser[23][24] from the summer of 2007[25] until July 18, 2008.[22] In a July 9, 2008 interview on McCain's economic plans, Gramm explained the nation was not in a recession, stating, "You've heard of mental depression; this is a mental recession." He added, "We have sort of become a nation of whiners, you just hear this constant whining, complaining about a loss of competitiveness, America in decline."[26] Gramm's comments immediately became a campaign issue. McCain's opponent, Senator Barack Obama, stated, "America already has one Dr. Phil. We don't need another one when it comes to the economy. ... This economic downturn is not in your head."[27] McCain strongly denounced Gramm's comments.[28] On July 18, 2008 Gramm stepped down from his position with the McCain campaign.[29] Explaining his remarks, Gramm stated that he had used the word "whiners" to describe the nation's politicians rather than the public, stating "the whiners are the leaders."[30] In the same interview, Gramm said, "I'm not going to retract any of it. Every word I said was true."[31]

As of 2009, Gramm is employed by UBS AG as a Vice Chairman of the Investment Bank division. UBS.com states that a Vice Chairman of a UBS division is "...appointed to support the business in their relationships with key clients."[32] He joined UBS in 2002 immediately after retiring from the Senate.[33]

Gramm lives in Helotes, outside San Antonio, Texas. He is married to Dr. Wendy Lee Gramm, a native of Hawaii, who is associated with George Mason University's Mercatus Center in Virginia. They are the parents of two sons: Marshall Gramm, a professor of economics at Rhodes College in Memphis, Tennessee, and Jeff Gramm, who has played in the indie pop band Aden.