Charles Frederick Holder (1851–1915) was the inventor of big-game fishing and a founder of Pasadena's Tournament of Roses and the Tuna Club of Avalon on Santa Catalina Island.

Holder came from a wealthy Massachusetts Quaker family. After working as a curator at New York's American Museum of Natural History, he moved to Pasadena in 1885. A passionate naturalist throughout his life, he was known for his books on marine zoology and the first books on big-game fishing, a sport Holder pioneered in 1898.[2] His books are noted for their combination of accurate scientific detail with exciting narratives.[3]

From 1890 to 1891, Holder was a president of the Tournament of Roses Association, and for 1910 he was named the tournament grand marshal. He became known in Pasadena, California, as a businessman, philanthropist, and conservationist/sportsman. In 1898, he founded the Tuna Club at Catalina as an international organization that called for proper management of all game fish.[4][5]

In 1910, he traveled with Frederick Russell Burnham to Mexico and uncovered Mayan artifacts, including the Esperanza Stone, a supposedly paranormal relic described in The Book of the Damned.[6][7]

In 1998, Holder was inducted in the International Game Fish Association Hall of Fame.[5]

Holder with the Valley Hunt Hounds 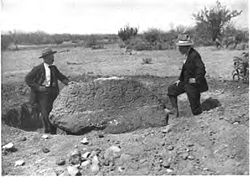