Vernonia is a genus of about 1000 species of forbs and shrubs in the family Asteraceae. Some species are known as Ironweed. Some species are edible and of economic value. They are known for having intense purple flowers. The genus is named for English botanist William Vernon. There are numerous distinct subgenera and subsections in this genus. This has led some botanists to divide this large genus into smaller groups which separate the species into distinct genera. For instance, the Flora of North America only recognizes about 20 species, 17 of which are in North America north of Mexico, with the other two or three being found in South America.[1] 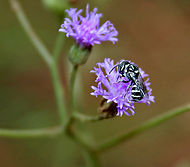 Several species of Vernonia, including V. calvoana, V. amygdalina, and V. colorata, are eaten as leaf vegetables. Common names for these species include bitterleaf, ewuro, ndole and onugbu. They are common in most West African and Central African countries. They are one of the most widely consumed leaf vegetables of Cameroon, where they are a key ingredient of Ndolé. The leaves have a sweet and bitter taste. They are sold fresh or dried, and are a typical ingredient in egusi soup.

V. amygdalina is well known as a medicinal plant with several uses attributed to it, including for diabetes, fever reduction, and recently a non-pharmaceutical solution to persistent fever, headache, and joint pain associated with AIDS (an infusion of the plant is taken as needed).[2][3] These leaves are exported from several African countries and can be purchased in grocery stores aiming to serve African clients for about $1.50/225gm pkg. frozen. The roots of V. amygdalina have been used for gingivitis and toothache due to its proven antimicrobial activity.[4]

In North America, of the 17 species of Vernonia (eg., V. altissima, V. fasciculata, V. flaccidifolia) all have the same effective properties as a blood purifier and uterus toner[5], containing sesquiterpene lactone, which helps also to prevent atherosclerosis.

V. galamensis is used as an oilseed in East Africa. It is grown in many parts of Ethiopia, especially around the city of Harar, with an average seed yield of 2 to 2.5 t/ha. It is reported that the Ethiopian strains of Vernonia have the highest oil content, up to 41.9% with up to 80% vernolic acid, and is used in paint formulations, coatings plasticizers, and as a reagent for many industrial chemicals.[6] 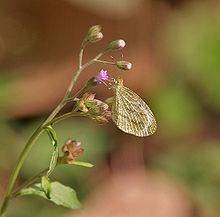 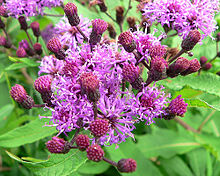 Species of this genus are found in South America, Africa, Southeast Asia, and North America. Vernonia species are well known for hybridizing between similar species in areas of overlapping ranges. There are approximately 1000 species of Vernonia. A partial species list is given below.