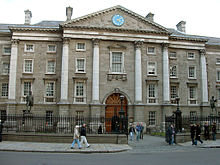 College Green (Irish: Faiche an Choláiste) is a three-sided "square" in the centre of Dublin. On its northern side is a building known today as the Bank of Ireland which until 1800 was Ireland's Parliament House. To its east stands Trinity College Dublin, the only constituent college of the University of Dublin. To its south stands a series of 19th-century buildings that are mostly banks. A major street, called Dame Street, enters the square from the west. College Green has been used as an assembly point for major political rallies. In the mid 1990s, United States President Bill Clinton addressed a mass crowd, during his Irish visit. President Barack Obama spoke there in a major address during his visit to Ireland on May 23, 2011.[1]

The area was once known as Hoggen Green from the Old Norse word haugr meaning mound, or barrow. The cemetery at College Green consisted of several burial mounds, which are thought to have contained the remains of some of the Norse kings of Dublin.[2] Between Church Lane and Suffolk Street the Norse had their Thing, an assembly and meeting-place, which was still to be seen in the 17th century. All along College Green, called Hoggen Green by the English, lay their barrows.[3]

Three major public monuments stand in College Green. A 19th century statue of Henry Grattan, one of the leading members of the old Irish Parliament, stands facing Trinity College (though the statue is badly obscured by planted trees). Further back stands what is generally perceived as a poor statue of patriot Thomas Davis; because of the deformed body shown and out of scale hands, the statue has occasionally been nicknamed "Frankenstein". Previously, that was the location of one of Dublin's finest equestrian statues, of King "Billy" (William of Orange) on Horseback. It was blown up by Irish republicans in the 1930s.

Daly's Club, originally frequented by members of the old Irish Parliament, moved to number 3, College Green, in 1791 and remained there until it closed in the 1820s.[4]

Freemen of the City of Dublin have the right to graze livestock on common ground, which includes College Green.

College Green is no longer a "Green" and now exists as a street running from the front gates of Trinity College Dublin to pedestrian traffic lights close to The Central Bank in Dame Street at the junction of Trinity Street. The houses are numbered starting with 1 on the north side of the Street at Westmoreland Street and TCD and continuing across to the south side and back on the opposite side to TCD and the bottom of Grafton Street. Dubliners often incorrectly identify the street as Dame Street because it continues into Dame Street. College Street which runs from Pearse Street and Westmoreland Street passing railings on the Northern side of Trinity College Dublin is often thought to be College Green.

As of July 2009, College Green, during peak times, is accessible to pedestrians, buses, taxis and cyclists.