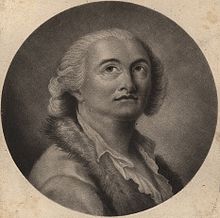 The history of Cagliostro is shrouded in rumour, propaganda and mysticism. Some effort was expended to ascertain his true identity when he was arrested because of his possible participation in the Affair of the Diamond Necklace.

Goethe relates in his Italian Journey that the identification of Cagliostro with Giuseppe Balsamo was ascertained by a lawyer from Palermo who, on official request, had sent a dossier with copies of the pertaining documents to France. Goethe met the lawyer in April 1787 and saw the documents and Balsamo's pedigree: Balsamo's great-grandfather Matteo Martello had two daughters, Maria who married Giuseppe Bracconeri, and Vincenza who married Giuseppe Cagliostro. Maria and Giuseppe Bracconeri had three children, Matteo, Antonia, and Felicitá who married Pietro Balsamo. The latter couple's son was Giuseppe Balsamo who was christened with the name of his greatuncle and eventually adopted his surname too. Pietro Balsamo was the son of a bookseller, Antonino Balsamo, who had declared bankruptcy before dying at age 44. Felicitá Balsamo was still alive in Palermo then, and Goethe visited her and her daughter.

Cagliostro himself stated during the trial following the Affair of the Diamond Necklace to have been born of Christians of noble birth, but abandoned as an orphan upon the island of Malta. He claimed to have travelled as a child to Medina, Mecca, and Cairo, and upon return to Malta to have been initiated into the Sovereign Military Order of the Knights of Malta, with whom he studied alchemy, the Kabbalah and magic, much of the typical mystical background asserted by many impostors and charlatans of those times. Goethe classifies this as "silly fairy-tales."

He was born to a poor family in Albergheria, which was once the old Jewish Quarter of Palermo, Sicily. Despite his family's precarious financial situation, his grandfather and uncles made sure the young Giuseppe received a solid education: he was taught by a tutor and later became a novice in the Catholic Order of St. John of God, from which he was eventually expelled.

During his period as a novice in the order, Balsamo learned chemistry as well as a series of spiritual rites. In 1764, when he was seventeen, he convinced Vincenzo Marano—a wealthy goldsmith—of the existence of a hidden treasure buried several hundred years prior at Mount Pellegrino. The young man's knowledge of the occult, Marano reasoned, would be valuable in preventing the duo from being attacked by magical creatures guarding the treasure. In preparation for the expedition to Mount Pellegrino, however, Balsamo requested seventy pieces of silver from Marano.

When the time came for the two to dig up the supposed treasure, Balsamo attacked Marano, who was left bleeding and wondering what had happened to the boy—in his mind, the beating he had been subjected to had been the work of djinns.

The next day, Marano paid a visit to Balsamo's house in via Perciata (since then renamed via Conte di Cagliostro), where he learned the young man had left the city. Balsamo (accompanied by two accomplices) had fled to the city of Messina. By 1765–66, Balsamo found himself on the island of Malta, where he became an auxiliary (donato) for the Sovereign Military Order of Malta and a skilled pharmacist.

In early 1768 Balsamo left for Rome, where he managed to land himself a job as a secretary to Cardinal Orsini.[1] The job proved boring to Balsamo and he soon started leading a double life, selling magical "Egyptian" amulets and engravings pasted on boards and painted over to look like paintings.[2] Of the many Sicilian expatriates and ex-convicts he met during this period, one introduced him to a fourteen-year-old girl named Lorenza Seraphina Feliciani, whom he married.

The couple moved in with Lorenza's parents and her brother in the vicolo delle Cripte, adjacent to the strada dei Pellegrini.[3] Balsamo's coarse language and the way he incited Lorenza to display her body contrasted deeply with her parents' deep rooted religious beliefs. After a heated discussion, the young couple left.

At this point Balsamo befriended Agliata, a forger and swindler, who proposed to teach Balsamo how to forge letters, diplomas and a myriad of other official documents. In return, though, Agliata sought sexual intercourse with Balsamo's young wife, a request to which Balsamo acquiesced.[4]

The couple traveled together to London, where Balsamo allegedly met the Comte de Saint-Germain. He traveled throughout Europe, especially to Courland, Russia, Poland, Germany, and later France. His fame grew to the point that he was even recommended as a physician to Benjamin Franklin during a stay in Paris.

Affair of the diamond necklace

He was prosecuted in the affair of the diamond necklace which involved Marie Antoinette and Prince Louis de Rohan, and was held in the Bastille for nine months but finally acquitted, when no evidence could be found connecting him to the affair. Nonetheless, he was asked to leave France, and departed for England. Here he was accused by Theveneau de Morande of being Giuseppe Balsamo, which he denied in his published Open Letter to the English People, forcing a retraction and apology from Morande.

Cagliostro left England to visit Rome, where he met two people who proved to be spies of the Inquisition. Some accounts hold that his wife was the one who initially betrayed him to the Inquisition. On 27 December 1789, he was arrested and imprisoned in the Castel Sant'Angelo. Soon afterwards he was sentenced to death on the charge of being a Freemason. The Pope changed his sentence, however, to life imprisonment in the Castel Sant'Angelo. After attempting to escape he was relocated to the Fortress of San Leo where he died not long after.

Portuguese author Camilo Castelo Branco credits to Balsamo the creation of the Egyptian Rite of the Freemasons and intensive work in the diffusion of Freemasonry, by opening lodges all over Europe and by introducing the acceptance of women into the community.

Cagliostro was an extraordinary forger. Giacomo Casanova, in his autobiography, narrated an encounter in which Cagliostro was able to forge a letter by Casanova, despite being unable to understand it.

Occult historian Lewis Spence comments in his entry on Cagliostro that the swindler put his finagled wealth to good use by starting and funding a chain of maternity hospitals and orphanages around the continent.

He carried an alchemistic manuscript The Most Holy Trinosophia amongst others with him on his ill-fated journey to Rome and it is allegedly authored by him.