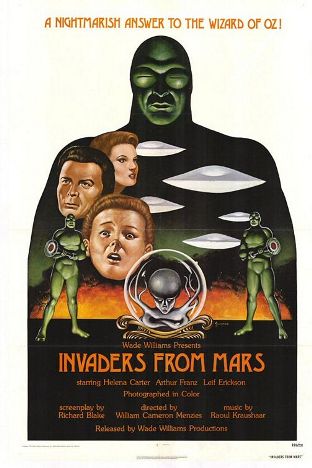 "Invaders from Mars" (1953) is a designed and directed by from a scenario by Richard Blake, based on a story treatment by John Tucker Battle, who in turn was inspired by a recounted dream of his wife's. It was produced independently by Edward L. Alperson Jr., stars Jimmy Hunt, and , and was picked up for distribution upon completion by Twentieth Century-Fox Film Corp. [imdb title|id=0045917|title=Invaders from Mars.]

It is notable for being told from the point of view of an older child in an adult's world in crisis, vivid color cinematography (color by Color Corporation of America), subtly surreal set designs and unique use of outre sound effects, including a choral background consisting of an ethereal, rhythmically wavering syllable sung in unison to enhance the overall inherent in Menzies' visual design.

These elements put this film a notch above most other independently-made American science fiction films. Although some sources state that the film was designed for the 3-D process (unlikely, since the project was in production before the breakthrough 3-D film, "", was released), it was neither filmed nor released in 3-D.

One night, a small boy, David MacLean (Jimmy Hunt), sees a land near his home. His scientist father () goes to investigate; when he returns, there is an unusual mark on the back of his neck and he behaves in a different, cold and hostile manner. Gradually, David realizes that there is a conspiracy in which the people of the town are one by one becoming cold and inhuman.

With the help of a local astronomer and health-department physician , he learns that the , that has buried itself in a sandpit just behind his home, is the vanguard of an invasion from Mars. The Army is contacted and convinced to investigate, leading to a military penetration of the underground hideout established by the Martians. The troops enter the saucer. Inside they find a Martian, mostly a large head with strange tentacles, encased in a glassy sphere. The Martian mastermind is served by tall, green, silent humanoid "mutants", who use cerebral implants to control the townsfolk in order to sabotage nuclear rocket experiments at a facility just outside of town.

In the film's climax, the Army, scientists, and David flee from the sandpit as explosives hidden aboard the flying saucer count down their last remaining seconds. After the explosion, the scene shifts and David is back in his bed, awakened by thunder. His parents reassure him by telling him the whole thing was just a nightmare and send him back to bed. As thunder awakens him again, he sees the same UFO slowly land at the sandpit near his house.

An alternative ending was filmed for the British release of the film, eliminating the dream concept. This release also included an extended sequence of the scene. This sequence was filmed a few months after the original release, and while the adult actors have not changed significantly, it is noticeable that Jimmy Hunt has gained some height and weight. Hunt is also wearing a vest sweater during the newer scenes and discusses UFO incidents such as the with Franz.

* as David Maclean
* as Dr. Pat Blake, MD
* as Dr. Stuart Kelston
* as Col. Fielding
* as George MacLean
* as Mary MacLean
* as Sgt. Rinaldi
* as Capt. Roth
* Janine Perreau as Kathy Wilson
* as Secretary (Uncredited)
* as the Police Chief

Critic Patrick Legare wrote of the film, "Originating during the science-fiction/Red-Scare boom of the '50s, "Invaders From Mars" is an entertaining little picture that holds up reasonably well." [Legare, Patrick. amg movie|id=1:25264|title=Invaders from Mars. Last accessed: , .]