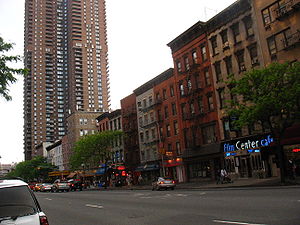 Manhattan Plaza is a large federally-subsidized residential complex at 400 West 43rd Street in midtown Manhattan, New York City. It has 1,688 units and about 3,500 tenants, primarily in the performing arts. It occupies the city block bounded north by 43rd Street, east by 9th Avenue, south by 42nd Street, and west by 10th Avenue.

The complex is a Mitchell-Lama development. It was built with U.S. Housing and Urban Development Section 8 subsidies, under which tenants pay no more than 30% of their income for rent, and the Section 8 program pays the rest. The complex was originally designed to rent 70% of the apartments to performing artists.[1][2][3][4] Manhattan Plaza was designed by architect David Todd.[5]

To compensate for the fact that the block is on a slightly tilted slope, the 10th Avenue building has 46 stories while the other has one fewer, thereby creating the illusion of equal height.

Aside from the McGraw-Hill Building, the complex was the tallest in the Hell's Kitchen area at the time it was completed, and is still highly visible from the north, south, and west sides.

Between the two buildings are a multi-story garage, a fitness center (including a swimming pool), a basketball court, a playground, tennis courts, a wall-climbing center, and town houses.

Though the majority of occupants work in the performing arts, there are a number of long-time residents who were offered apartments because they were displaced from the old neighborhood.

Located within the 10th Avenue building is the 43rd St Kids Preschool, which was founded in 1981. It is a private, non-profit, parent cooperative school, and accepts children ages 19 months to 5 years.

More than 1,500 one-act plays including more than 40 by Lewis Black have been staged at the Laurie Beechman Theatre in the West Bank Cafe (where Bruce Willis was a bartender) at the base of the building.[6]

In the middle of March 2009, the original Playground located on the 3rd floor rooftop was taken down in order to build a new Playground built by Kompan and sponsored by former football player Tiki Barber. The company was known as Tiki Recreation. It is 1 of 3 rare and unique playgrounds. It has an electronic setting and virtual interactive games programed within the equipment. The park officially opened June 8, 2009.

The Building is the subject of an upcoming documentary titled "Miracle on 42nd Street". The film is intended to have a festival release and is expected to be aired on television. The filmmakers consist of current and former tenants.

Journalist and Edgar Award-winning novelist, Thomas Adcock, has lived in the Manhattan Plaza since 1984 with his wife, actress Kim Sykes; Larry David, co-creator of the sitcom Seinfeld lived in Manhattan Plaza across from comedian Kenny Kramer who provided inspiration for the character Cosmo Kramer.[7]

James Earl Jones has family members throughout the building; his brother provided the original voice heard when entering the "Park & Lock" Garage.

Tiki Barber, who was involved with construction of the new playground, has occasionally visited the playground.

Samuel L. Jackson worked there as a security officer in his first and only non-acting job.