Earl Simmons (born December 18, 1970), better known by his stage name DMX, is a multiplatinum American rapper (a member of the hip hop collective Ruff Ryders) and actor who rose to fame in the late 1990s. His stage name pays tribute to the Oberheim DMX drum machine, an instrument he used when he made his own rap beats in the 80's. To date, his best-selling album is his 1999 album ...And Then There Was X, which featured the hit single "Party Up (Up in Here)". As an actor, he also starred in the films Belly, Romeo Must Die, Exit Wounds, Cradle 2 The Grave and Last Hour, and his own reality television series called Soul of a Man on the American cable television network BET. In 2002, DMX wrote an autobiographical book titled E.A.R.L.: The Autobiography of DMX.

Simmons was born in Mount Vernon, NY. He was the child of Joe Barker and Arnett Simmons. DMX's mother was pregnant with him when she was 19 and had had a daughter two years previous with another man.[1] He was raised in the faith of Jehovah's Witnesses,[2] and even though they share the same name he is not the cousin of hip hop mogul Russell Simmons, the co-founder of the studio which released his first studio album. He relocated early in his childhood to neighboring Yonkers. He spent much time on the streets committing crimes. However, he considered hip hop to be an escape from his hard times, as he enjoyed beatboxing, turntablism, and eventually rapping. He spent much of his adolescence in and out of jail.[3]

In 1984, DMX began to beatbox with Ready Ron. In 1991, Gabriel Grevenstuk from The Source magazine praised him in his "Unsigned Hype" column, which highlighted unsigned hip-hop artists. Later, he was signed to the Columbia Records subsidiary Ruffhouse in 1992; under that label he released his debut single "Born Loser", which did not get much airplay. However, Ruffhouse promoted many other artists on its roster rather than DMX and eventually agreed to release him from his contract. In 1994, he released a second single, "Make a Move". In 1997, he made a guest appearance on LL Cool J's "4, 3, 2, 1". Additional guest spots on Mase's "24 Hours to Live" and "Take What's Yours", and The LOX's "Money, Power & Respect" created a strong buzz.[3] DMX also made a cameo appearance in the Sum 41 music video for "Makes No Difference".[4]

In February 1998, DMX released his debut major-label single under Def Jam Recordings, "Get At Me Dog", which was certified gold by the RIAA. His first major-label album It's Dark and Hell Is Hot, which included the single Ruff Ryders Anthem, was released in May 1998 and debuted in the top spot on the Billboard 200 chart in the U.S. It earned Simmons numerous comparisons to Tupac Shakur and sold over five million copies. Later that year in December, DMX released his second album, Flesh of My Flesh, Blood of My Blood. It entered the charts at number one (and stayed there for 3 consecutive weeks) with 670,000 units shipped in the first week alone. The album eventually went 4x platinum. DMX was the second rapper to have two albums released in the same year debut at number one on Billboard's Top 200, the first being Tupac Shakur.[3]

Simmons released his third album, ...And Then There Was X, on December 21, 1999. It debuted at number one on the pop charts, his third straight album to do so. "Party Up" was his biggest single, and became his first Top Ten hit on the R&B charts. His lead single off the album, "What's My Name?" (containing the piano prelude from Richard Addinsell's Warsaw Concerto), and third single "What These Bitches Want" (featuring Sisqo) were also popular. .....And Then There Was X is Simmons' best-selling album to date, going six times platinum.[3]

After improving his legal situation, Simmons returned to the studio and completed his fourth album, The Great Depression. Released October 3, 2001, it was his fourth straight album to debut at the top of the Billboard 200. With hits such as "Who We Be", "We Right Here", and the street track, "Shorty Was The Bomb". The Great Depression quickly went triple platinum, but was not as commercially or critically successful as his previous album.[3]

In 2003, Grand Champ became DMX's fifth straight album to debut at number one. This made DMX the only artist in history to have 5 albums (and his entire album catalog) debut at #1 with hits "Where Tha Hood At" and "Get it on the Floor". After its release, he informed the public that he planned to retire, and that Grand Champ would be his final album.[5]

In January 2006, DMX signed to Columbia Records, the label that released his early single "Born Loser".[6] DMX recorded his next album while switching record labels, causing numerous delays. The album was finally released on August 1, 2006, under the title Year of the Dog...Again. It missed the number one spot in the charts by only one hundred sales. He also appeared on a remix of Busta Rhymes' "Touch It". Two more singles, "Lord Give Me A Sign" and "We In Here", followed. The Definition of X: The Pick of the Litter was DMX's greatest hits album, released on June 12, 2007.[3] Def Jam also released a new compilation album entitled The Best of DMX[7][8] which features hit singles including "Where the Hood At?" and "X Gon' Give It to Ya".

It had been reported that DMX is working on his upcoming seventh studio album tentatively titled Redemption of the Beast. DMX said that he has been working "nonstop, every day" on the new album, and plans to release it before December of this year.[9] On September 24, 2011 a video for a new track called "Last Hope" was released on the internet. It is unknown if the track will appear on the album. On October 11, 2011 DMX performed at the 2011 BET Hip Hop Awards. DMX has started the process of getting his life and career back on track by excusing all of his old staff and team and starting fresh, headed up by veteran entertainment manager Jason Fowler of J Mike Management & Entertainment. The new album Redemption of the Beast is slated to be released commercially early first quarter 2012. [10]

DMX made his film debut in Belly with other musicians including Nas, Method Man and T-Boz. His breakout role in Romeo Must Die opposite Jet Li and Aaliyah in 2000 was followed by a starring role in pair of successful action films, Exit Wounds opposite Steven Seagal, and Cradle 2 the Grave, again opposite Jet Li. Since then, he has appeared in a string of unsuccessful action films, including Never Die Alone, Jump Out Boys, Last Hour, Death Toll, Lockjaw: Rise of the Kulev Serpent, and The Bleeding.

On television, he starred in a six episode reality series DMX: Soul of a Man and has made appearances on Third Watch, Eve and MTV Jams.

Since 1999, DMX has been married to Tashera Simmons.[11] They have four children together.[12][13] On July 22, 2010, Tashera Simmons said she was separating from DMX after 11 years of marriage, just 2 weeks after he was released from jail.[14] DMX currently has 10 children, 4 of whom with ex-wife Tashera Simmons.

In 2009, DMX claimed he would pursue preaching but will also continue to produce music. He completed a Gospel album prior to his incarceration. According to MTV, he has semi-retired to study the Bible more in an effort to give messages behind the pulpit.[15] 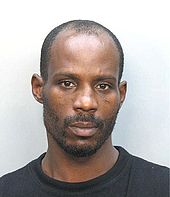 Since beginning his life as a public figure, DMX's multiple arrests have been for offenses including: animal cruelty,[16] reckless driving,[17] unlicensed driving, drug possession,[18] and identity falsification.[19]

In 1998, DMX was tried for rape and sodomy, sexual abuse, and unlawful imprisonment.[20] The case was dismissed when DNA evidence from the crime did not match him.[21]

In 1999, DMX joined rappers Jay-Z, Method Man, and Redman for Jay-Z's Hard Knock Life tour. DMX was arrested on, but later cleared of, charges of a stabbing at a tour stop in Boston, Massachusetts; he was also cleared of an assault charge in his hometown of Yonkers.

In the summer of 1999, DMX and his wife were arrested and charged with animal cruelty and possession of crack and weapons after his manager-uncle was accidentally shot at a hotel in New Jersey.[22] Eventually, DMX successfully plea-bargained his sentence down to fines, probation, and community service.

In 1999, when officers of the Fort Lee Police Department executed a search of his home, DMX promptly surrendered himself on weapons charges.[23]

He was arrested again in March 2000 for aggravated unlicensed operation of a motor vehicle, speeding, failure to signal, driving without a license, failure to notify the DMV of an address change, and possession of marijuana on New York State Route 33 in Cheektowaga, New York, following a concert in Buffalo, New York. His failure to appear at his subsequent court date in Cheektowaga on March 21 led to the issue of a warrant for his arrest. He later turned himself in, pled guilty to a reduced charge of driving without a license, and was sentenced to 15 days in jail and fined $400.

DMX had another jail sentence in 2001 for driving without a license and possession of marijuana. His appeal to reduce the sentence was denied; rather, he was charged with assault for throwing objects at prison guards. DMX entered rehab to treat his addiction to drugs in 2002.[25][26]

In June 2003, DMX was arrested for using indecent language during a performance at Saint Kitts and Nevis. The country's Information Minister alleged that a contract signed before the concert stipulated the show would be without indecent language on stage. DMX was released on $376 bail.[27]

In June 2004, he was arrested at the John F. Kennedy International Airport on charges of cocaine possession, criminal impersonation, criminal possession of a weapon, criminal mischief, menacing, and driving under the influence of drugs or alcohol while claiming to be a federal agent and attempting to carjack a vehicle.[28] He was given a conditional discharge on December 8, 2004, but pled guilty on October 25, 2005, to violating parole.[29] On November 18, 2005, DMX was sentenced to 70 days in jail for violating his parole; the lateness charge added a 10-day extension to the original 60-day sentence.[30] DMX was released from jail for good behavior early on December 30, 2005.[31]

Maryland resident Monique Wayne claims her son's father is DMX.[32][33][34][35] She has sued him repeatedly for defamation of character[36] and child support. A final outcome is still pending.

On December 30, 2008, DMX had pleaded guilty to charges of drug possession, theft, and animal cruelty and was sentenced to 90 days in jail on January 31, 2009.[37][38] On May 22, 2009, DMX entered a plea agreement/change of plea, pleading guilty to attempted aggravated assault. DMX was released from jail early on July 6, 2010, after serving four out of six months for violating drug probation. A television pilot was filmed about his road to recovery that very day, but following his arrest three weeks later, the series was not picked up.[39]

DMX was arrested again on August 24, 2011 for speeding (102 in a 65), reckless driving, and driving with a suspended license. DMX admits to speeding but says he was only going 85 mph in a 65 mph zone. DMX is now planning to sue the Arizona police.[45]

DMX started off as friends with Ja Rule, as well as Jay-Z. DMX, Jay-Z and Ja Rule were part of a group at the time named Murder Inc. (The name was later used by Ja's producer Irv Gotti for his record label.)[citation needed] They recorded songs under the name together. DMX and Jay-Z also guest starred on Ja Rule's first album on the track "It's Murda". Eventually Ja Rule's feuds with Busta Rhymes, Dr. Dre, Eminem and 50 Cent went away. The two rappers waged a war of words for years after DMX accused Ja Rule of copying his gruff style on records.[46] DMX admitted that he initially wanted to end with his rap rival when he was released from jail in 2005 before making peace: "Gotti came to me in jail and said I want to make peace with you and him", said DMX, "I was like, 'Alright Gotti, lets do it."[46] DMX and Ja Rule finally ended their feud at VH1's 2009 Hip Hop Honors.[47]