Traffic were an English rock band whose members came from the West Midlands.[1] The group formed in April 1967 by Steve Winwood, Jim Capaldi, Chris Wood and Dave Mason.[2] They began as a psychedelic rock group whose early singles were influenced by The Beatles,[citation needed] and diversified their sound through the use of instruments such as keyboards like the Mellotron, reed instruments, and by incorporating jazz and improvisational techniques in their music.[2] Their first three singles were "Paper Sun", "Hole in My Shoe", and "Here We Go Round the Mulberry Bush".[1]

After disbanding in 1969, during which time Winwood joined Blind Faith, Traffic reunited in 1970 to release the critically acclaimed album John Barleycorn Must Die. The band's line-up varied from this point until they disbanded again in 1975, although a partial reunion, with Winwood and Capaldi, took place in 1994.[2]

Traffic's singer, keyboardist and sometimes guitarist Steve Winwood was the frontman of the Spencer Davis Group at age 15. The Spencer Davis Group released four Top Ten singles and three Top Ten albums in the United Kingdom, as well as two Top Ten singles in the United States.[2] Drummer/vocalist/lyricist Jim Capaldi and guitarist Dave Mason had both been in the Hellions and Deep Feeling, while woodwinds player Chris Wood came out of Locomotive.

Winwood, Capaldi, Mason, and Wood met when they jammed together at The Elbow Room, a club in Aston, Birmingham.[3] After Winwood left the Spencer Davis Group in April 1967, the quartet formed Traffic.[2] Jim Capaldi came up with the name of the group while the four of them were waiting to cross the street in Dorchester.[4] Soon thereafter, they rented a cottage near the rural village of Aston Tirrold, Berkshire to write and rehearse new music.[3] The use of this cottage would prove to be important in the development of the band.[5]

Traffic signed to Chris Blackwell's Island Records label (where Winwood's elder brother Muff, also a member of the Spencer Davis Group, later became a record producer and executive), and their debut single "Paper Sun" became a UK hit in mid-1967.[2] Their second single, Mason's psych-pop "Hole in My Shoe", was an even bigger hit, and it became one of their best-known tracks. The band's third single, "Here We Go Round the Mulberry Bush", was made for the soundtrack of the 1967 British feature film of the same name.[2] Their debut album was Mr. Fantasy, produced by Jimmy Miller, and like the singles, was a hit in the UK but not as big elsewhere, although it did reach number 88 in the US.[6] 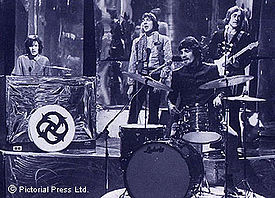 Traffic performing in concert in 1968

Mason had already quit the group by the time Mr. Fantasy was released, but rejoined for a few months of 1968,[7] long enough to contribute to a slim majority of the songs on their second album, Traffic. Released in 1968, it included the original version of Mason's "Feelin' Alright", which was later recorded with great success by Joe Cocker and Three Dog Night.[1] Winwood, Wood, and Capaldi wanted to take the group in a different direction, opting for a folk/blues style rather than their earlier psychedelic/eclectic rock sound, while Mason was oriented towards psychedelic pop. Mason also cited discomfort with the Traffic lifestyle.[7] The band toured the US as a trio in late 1968, which led to the following year's release of Traffic's next album, Last Exit, one side of which was recorded live. During 1968 Winwood and Wood often played with Jimi Hendrix, and they both appear on The Jimi Hendrix Experience's 1968 double album Electric Ladyland, as did an uncredited Dave Mason.

The band was dissolved by Winwood's leaving in early 1969. His departure went unexplained at the time, even to Capaldi and Wood, but he later said "Because of the way I ended the Spencer Davis Group, I saw no reason why I shouldn't leave Traffic and move on. It seemed to me a normal thing to do."[7]

Winwood then formed the supergroup Blind Faith, which lasted less than a year, recording one album and undertaking one US tour. The remaining members of Traffic began a project with Mick Weaver (a.k.a Wynder K. Frog), the short-lived Mason, Capaldi, Wood and Frog (later shortened to Wooden Frog), which played a few live dates and recorded some BBC sessions, but broke up before releasing any formal recordings.

After the break-up of Blind Faith in 1969, Winwood began working on a solo recording, bringing in Wood and Capaldi to contribute, and the project eventually turned into a new Traffic album, John Barleycorn Must Die, their most successful album yet. Traffic went on to expand its lineup late in 1970, adding Ric Grech on bass. The group further expanded in 1971 with drummer Jim Gordon of Derek and the Dominos and percussionist Rebop Kwaku Baah.[1] The live album Welcome to the Canteen was released in September and marked the band's break with United Artists Records. It did not bear the "Traffic" name on the cover, and instead was credited to the band's individual members including Mason, who returned for his third and final spell with the band. The album ended with a version of The Spencer Davis Group song "Gimme Some Loving", which became a minor hit.

Following the departure of Mason, Traffic released The Low Spark of High Heeled Boys (1971), which was a Top 10 American album but did not chart in the UK; the LP is also notable for its striking die-cut cover. It sold over half a million copies in 1972 when it received a gold disc, and was awarded a R.I.A.A. platinum disc in March 1976 for over a million total sales.[8] Once again, however, personnel problems wracked the band as Grech and Gordon left the band in December 1971,[9] and the month after, Winwood's struggles with peritonitis brought Traffic to a standstill. Jim Capaldi used this hiatus to record a solo album, Oh How We Danced,[10] which would prove to be the beginning of a long and successful solo career. The album included a surplus recording from The Low Spark of High-Heeled Boys, "Open Your Heart", and the new tracks featured drummer Roger Hawkins and bassist David Hood, from the Muscle Shoals Sound Studio house band. Capaldi soon brought them on board to replace Grech and Gordon.[1]

The new lineup (Winwood, Capaldi, Wood, Kwaku Baah, Hawkins, Hood) toured America in early 1972 to promote the LP, and their concert at the Santa Monica Civic Auditorium on 21 February was recorded in multitrack audio and captured on colour videotape with multiple cameras. The 64-minute performance is thought to be the only extended live footage of the group. It was evidently not broadcast on television at the time, but was later released on home video and DVD.

Following Winwood's recovery from peritonitis, Traffic's sixth studio album, Shoot Out at the Fantasy Factory, released in 1973, met with a cold critical reception but in sales, it was another major hit. It was shortly followed by a major world tour, from which the double live album, On the Road, was drawn.[9] It broke the band's string of British flops by reaching number 40 in the UK Albums Chart.[11] However, these successes were soured by the departure of Hawkins, Hood, and Kwaku Baah at the end of the world tour,[9] and by Chris Wood's increasing problems with drug use and depression.

Bassist Rosko Gee replaced David Hood, while Capaldi switched back to drums. When the Eagle Flies, released in 1974, was yet another Top Ten album in the USA, and moderately successful in the UK. However, a subsequent tour of the USA, while successful in terms of ticket sales,[9] was emotionally exhausting for the band. Capaldi later recalled "Rosko Gee and I were the only ones in anything like normal shape. Steve was having recurrent problems with the peritonitis, and Chris' body was suffering from chemical warfare."[10] Winwood ultimately passed his boiling point, walking off the stage in the middle of what would prove the band's final show, in Chicago. The following day he left the tour without a word to anyone, leaving the rest of the band waiting for him at the venue for that night's scheduled performance.[10] Feeling Winwood had been integral to Traffic's music, the remaining members opted not to continue the band without him.

Traffic's break-up was followed by two compilations from United Artists (Heavy Traffic and More Heavy Traffic), both of which only drew from the first half of their output.

Steve Winwood embarked on a solo career, while Rosko Gee and Rebop Kwaku Baah joined German band Can. Kwaku Baah died in 1983, and Capaldi dedicated his solo album Fierce Heart to his memory. Chris Wood died later in 1983, from pneumonia. 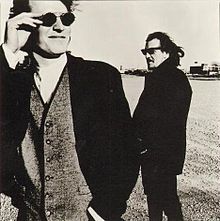 All the still living members of Traffic's most recent lineup reunited in 1994 for a one-off tour, after a fan left a voice mail message at Bob Weir's (of the Grateful Dead) hotel in Chicago during the 1992 "Scaring the Children" tour, and suggested it would be cool if Traffic toured with the (then Grateful) Dead. Traffic opened for The Grateful Dead during their summer tour. The flute/sax role on the tour was played by Randall Bramblett, who had worked extensively with Steve Winwood. Michael McEvoy joined the line up playing keyboards, guitar and viola, and Walfredo Reyes Jr. played drums and percussion. Winwood and Capaldi recorded and released a new Traffic album, Far From Home, with no involvement from the other four members. It broke the top 40 in both the UK and USA.

The four original members of Traffic were inducted for their contributions in the Rock and Roll Hall of Fame on 15 March 2004. Winwood, Capaldi, Mason, and Stephannie Wood (standing in for her late brother Chris) all attended the ceremony, though only Winwood and Capaldi took part in the induction performance.

Tentative plans for another Traffic project were cut short by Jim Capaldi's death at age 60 in January 2005, ending the songwriting partnership with Winwood that had fueled Traffic from its beginning.

Dear Mr. Fantasy was a celebration for Capaldi that took place at The Roundhouse in Camden Town, London on 21 January 2007. Guests included Steve Winwood, Paul Weller, Pete Townshend, and many more. Dear Mr. Fantasy featured the music of Jim Capaldi and Traffic, and all profits went to The Jubilee Action Street Children Appeal.

Winwood is currently playing some Traffic songs, such as "Dear Mr. Fantasy" and "Pearly Queen", at concerts alone and with other musicians, such as Eric Clapton and Santana.