Memory of the World Programme

Memory of the World Programme

Logo of the Memory of the World Programme

UNESCO's Memory of the World Programme is an international initiative launched to safeguard the documentary heritage of humanity against collective amnesia, neglect, the ravages of time and climatic conditions, and willful and deliberate destruction.[1] It calls for the preservation of valuable archival holdings, library collections and private individual compendia all over the world for posterity, the reconstitution of dispersed or displaced documentary heritage, and the increased accessibility to and dissemination of these items.[1][2][3]

Background and the IAC

The program began in 1992 as a way to preserve and promote documentary heritage, which can be a single document, a collection, a holding or an archival fonds that is deemed to be of such significance as to transcend the boundaries of time and culture.[1] This recorded memory reflects the diversity of languages, people, and cultures.[4] UNESCO, the world agency responsible for the protection of the world's cultural and natural heritage, realized the need to protect such fragile yet important component of cultural heritage. To this end, the Memory of the World Programme was established with the aim of preserving and digitizing humanity's documentary heritage.[5]

The program is administered by a body known as the International Advisory Committee, or IAC, whose 14 members are appointed by the UNESCO Director-General.[1][3] The IAC is responsible for the formulation of major policies, including the technical, legal and financial framework for the program. Regular meetings were held by the IAC in its interim capacity beginning in 1993 to sustain the momentum gained by the program, culminating in the creation of the Memory of the World Register during its second meeting in 1995,[1][6] with the inaugural batch of documents being inscribed on the Register in 1997, after the statutes that created the IAC as a standing committee took effect.[7] The IAC also maintains several subsidiary bodies:[8]

Memory of the World Register 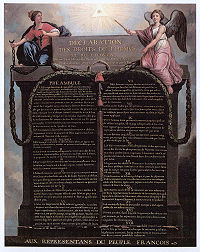 The Declaration of the Rights of Man was used to disseminate to the political community the first-ever French Constitution. This also formed the basis of the United Nations Declaration of 1948.[9]

The Memory of the World Register is a compendium of documents, manuscripts, oral traditions, audio-visual materials, library, and archival holdings of universal value.[1] Inscription on the Register leads to improved conservation of the documentary heritage by calling upon the program's networks of experts to exchange information and raise resources for the preservation, digitization, and dissemination of the material.[3] The program also has the aim of using state-of-the-art technologies to enable wider accessibility and diffusion of the items inscribed on the Register.[3]

Any organization or individual can nominate a documentary item for inscription on the Register. During its meetings, the IAC examines the full documentation of the item's description, origin, world significance, and contemporary state of conservation. The body utilizes a set of criteria in examining each of the nominations:[10]

Other matters that will also be taken into account for each nomination are:[10]

To date, the IAC has placed 193 documentary items of significance on the Register. Items are inscribed onto the Register during the IAC's biennial meetings, which take place every odd year:

Of the 193 documentary heritage items listed on the Register, 94, or nearly half, is accounted for by the region encompassing Europe and North America, which includes 33 countries and/or territories.

In response to the worldwide scale of the Register, some countries or groups of countries have also established national (i.e. national registers) and regional counterparts, resulting in a three-tiered Register that has been supported by the Memory of the World Programme. This allows for the better administration of documentary items.[1] 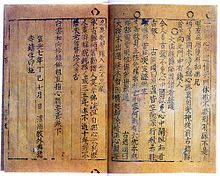 The Jikji is the earliest known book printed with movable metal type in 1377.

The Jikji Prize was established in 2004 in cooperation with the South Korean government to further promote the objectives of the Memory of the World Programme, and to commemorate the 2001 inscription of the country's Jikji on the Register.[13][17] The award, which includes a cash prize of $30,000 from the Korean government, recognizes institutions that have contributed to the preservation and accessibility of documentary heritage.[4]

The prize has been awarded biennially since 2005 during the meeting of the IAC.[4]

^ A. The Europe and North America region includes the Transcaucasian States of Armenia and Azerbaijan, Russian Federation and Turkey. Furthermore, transcontinental documentary heritage like the Archives of the Dutch East India Company, shared among India, Indonesia, Netherlands, South Africa & Sri Lanka, has been classified under this region. The item from Netherlands Antilles is also included in this region, considering its political affiliation with the Netherlands.