Chinandega is a town and the departmental seat of Chinandega department (4,822.42 km2) in Nicaragua. It is also the administrative centre of the surrounding municipality of the same name. The city has a population of 121,793 inhabitants (2006) with 151,000 in the municipality. It is located about 80 miles (134 km) northwest of Managua and about 43 miles (72 km) southwest of El Guausaule, on the border with Honduras.

The region around Chinandega produces mostly agricultural products, particularly oils, flour, peanuts, shrimp, sugarcane, with sugar mills in Chichigalpa and El Viejo, and the production of liquors with an international reputation.

The weather is humid and hot because of the tropical climate. Chinandega is about 12 miles (20 kilometers) from the Pacific Ocean. 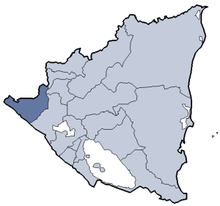 The department has numerous beaches, natural reserves, historic towns, mangroves, and ancient churches; the volcano of San Cristóbal, the highest in Nicaragua, can be found here, as well as the other volcanoes of the San Cristóbal complex (El Chonco, Moyotepe, and Casita), and further east, the peninsula-forming Cosigüina volcano.

Chinandega is also a center of agriculture growing sugarcane, bananas, peanuts, sesame seeds, cashews, oranges, and grains. It is also a shrimping and fishing center and it manufactures salt, and leather goods. It is also home to the largest sugar mills and rum factory (Flor de Caña)[1] in the country. The port of Corinto, also in Chinandega, is the most important in Western Nicaragua.

Natives of the department include Salomón Ibarra Mayorga, writer of the national anthem of Nicaragua; Tino López Guerra, the bullfighter; the priest Tomás Ruiz; and athletes like Vicente Padilla and Próspero González.

The city of Chinandega has been nicknamed "City of Oranges" (Ciudad de las Naranjas) and "Hot City" (Ciudad Cálida). Its name is of Nahuatl origin, though its exact meaning is disputed. It may come from the words Chinamitl-tacalt, “place surrounded by reeds.”[2]

It was a small city during the colonial era, but its location amongst fertile and flat lands, and its position as a commercial center, improved its status little by little over the course of a few years. The Spanish chronicler Friar Antonio Vázquez Espinoza in his compendium and description of the West Indies describes his visit to Chinandega in 1613 as follows: “The town of Chinandega is comprised of many Indians, plentiful corn, and all of the fruits of the earth, and appears to be a piece of paradise.”[2]

Officially a settlement (poblado) from 1796, and well-planned roads were built at Chinandega, after the design of the engineer Antonio Rojas. On March 30, 1835, a law was instituted that mandated the established a fair that would fall on December 8 of every year.

In 1842, it was named capital of the short-lived Federal Republic of Central America, and in 1858, it became the center of a new administrative department.

On November 1, 1998, Chinandega was hit by massive flooding caused by Hurricane Mitch. The flooding resulted in many thousands of people losing their homes, as well as damages to infrastructure which have still (as of 2009) not been repaired.

In accordance with its colonial past and colonial-era urban planning, the city is centered around a central park with the beautiful Romanesque-style Our Lady Santa Ana Colonial Church, a church very important to the city. It has withstood over a century of violent storms, earthquakes, and wars. The church was severely affected by an earthquake in 1885, and was later rebuilt into its current state. This is not the location of the original building in the seventeenth century, however. According to documents from Bishop Morel of Santa Cruz dated June 1751, "This church owns three naves on the river, with its sacristy and choir close by, two small bells, limestone walls, and tiled floors". Two ancient doors in Antigueño style open on the north and south flanks of the church; these survived the earthquakes, including the 1925 earthquake that damaged the façade and towers. 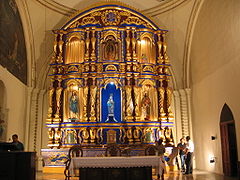 The feast day of Saint Anne is celebrated on July 26 of every year.

The church has been restored to its former colonial splendor, and awaits the announcement that will make it the seat of a new diocese, with the church itself becoming elevated to the status of cathedral. 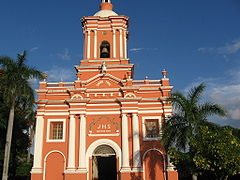 El Calvario ("Calvary") Parish is located in the neighborhood of the same name, and was built in 1874 by Bishop Monsignor Manuel Ulloa y Calvo. The first structure here was of adobe, but on October 11, 1885, this was destroyed by an earthquake and later rebuilt. Its patron is the Holy Name of Jesus, celebrated on the last Sunday of January every year. On May 17, the feast day of Saint Pascal Baylon is also celebrated in the parish. The church was recently restored by the COEN Foundation.

Sanctuary of Our Lady of Guadalupe 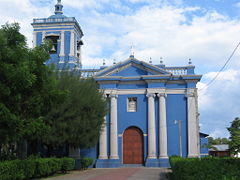 Of recent construction, its origins lie in a structure built in 1855 but was destroyed in an earthquake in 1885. It was originally built as an offering to Our Lady of Guadalupe during an outbreak of cholera. After the outbreak, an image of Our Lady of Guadalupe was first displayed in the church on December 25, 1856, and Pope Pius IX elevated the church to the rank of sanctuary, the first church in Central America to earn this title. It was restored by the COEN Foundation and its principal feast day is celebrated on December 12, with processions during Holy Week being celebrated here as well. 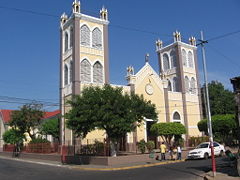 This church also suffered from severe damage during the 1885 earthquake, after which it was enlarged. The church was unofficially associated with the city's aristocracy; elaborate weddings between members of the aristocracy were celebrated within its wall. In 1923, with the arrival of the Franciscans at the church, it was completely rebuilt. Its principal feast day falls on June 13 every year. There is also a procession that is held here on January 1 of every year. 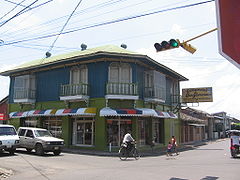 Chinandega has many colonial-era buildings, though not to the extent of the Nicaraguan cities of León and Granada, since many of them were damaged during a 1928 bombardment by the Liberal forces, who had revolted against Conservative Adolfo Díaz. Most of the city was destroyed, and only the churches remained unharmed. The city does not have a code that protects colonial architecture as León and Granada do. 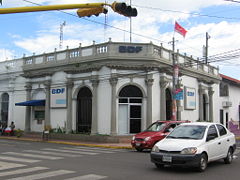 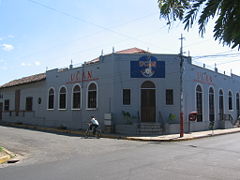 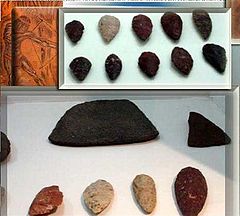 Chinandega's cultural and historical riches date from before the Spanish conquest, when this region was inhabited by various indigenous tribes, who had perhaps proceeded from the north, possibly present-day Mexico. There is a museum in the city, "Enrique Mantica Deshon", which contains 1200 archaeological artifacts of Pre-Columbian origin. There is also a municipal theater called "Rodrigo Callejas" which can seat 400 people.