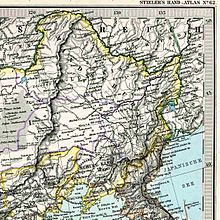 Anyuy River (Russian: река Аню́й), also known as Onyuy River (Онюй) or Dondon River (Дондон) is a river in the Khabarovsk Krai in Russia. It is a right tributary of the Amur River. It originates on slope of Tordoki Yani in the Sikhote-Alin mountain range, and falls into the Amur between Khabarovsk and Komsomolsk-on-Amur.

The length of the Anyuy River is 393 km. The area of its basin is 12,700 km². The Manoma River is a main tributary of the Anuyu River. 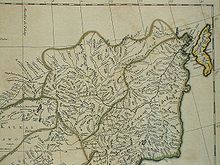 The Tondon River, separating the lands of the Yupi and Ketching people on a 1734 French map

According to French Jesuit geographers travelling on the Ussury and the Amur in 1709, the Dondon River (Tondon, in contemporary accounts) formed the border between the lands populated by the people known as Yupi Tartars (which is the traditional Chinese name for the Nanai people and related groups), living on the Ussury and the Amur south of the Dondon, and the people whose name was transcribed into French as Ke tcheng, living on the Amur from the mouth of the Dondon downsream.[1] The latter name may be a transcription of the reported self-name of the Nanais of the lower Amur, Hezhe nai or Hezheni [2] and with the modern Chinese name for the Nanais, Hezhe or Hezhen.