Midtown Madness 2 is a free roam racing/arcade sequel to Midtown Madness, part of the Midtown Madness series, developed by Angel Studios (now Rockstar San Diego) and published by Microsoft Game Studios, which features a range of vehicles which can be driven around London and San Francisco.

The game features Blitz, Checkpoint, Circuit, and Cruise modes, which are all derived from the original Midtown Madness game. Winning Blitz, Checkpoint and Circuit races allows you to unlock new vehicles and paint jobs. The Cruise mode lets you roam freely around the two open world recreations of London and San Francisco.

A Crash Course can be completed in each of the cities. The Cab Driving School in London follows an extremist view of a London Cab driver, where a player must complete objectives in a London cab. The Stunt Driver course in San Francisco allows the player to gain experience in stunt driving for a Hollywood movie, using the Ford Mustang Fastback.

Players can change variables which affect the vehicle's performance and visual appearance of the game before starting a race, such as the weather and time of day. Additionally, police vehicles frequency can be modified, as with the amount of traffic and pedestrians.

Every race or cruise would begin with someone commenting. These commenters would also be heard at the end of a race (not a cruise) saying something that depends on your position upon finishing. The commenters would be different for each race, and they are different for each city (i.e. someone commenting in San Francisco would not be heard in London, or vice versa). These include for San Francisco: a newscaster, a hippie, a stunt driving instructor, a short-tempered film director; for London: a Scottish man, an English woman, and (presumably through her elegant-sounding voice) Queen Elizabeth II, although the woman mispronounces English words using the American slang terms instead.

There are a wide variety of iconic vehicles to choose from, such as the Aston Martin DB7 Vantage, New Mini Cooper and the Audi TT. Each vehicle includes a number of unique paint jobs. Some vehicles also contain unlockable special paint jobs, accessed by completing certain races or Crash Course challenges (or getting a mod off Midtown Madness Archive)

Additional vehicles, which existed in the Midtown Madness 2 beta, were extracted and replaced in the final version; the American LaFrance Silver Eagle Firetruck, a Moon Rover and the Cadillac Eldorado Seville 1959, the latter of which was officially integrated with Midtown Madness 3. 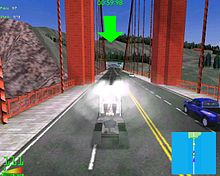 Driving Freightliner Century in a race

Many fans of the game have also created their own vehicles, based on other popular real life or toy vehicles, ranging from the Shelby Mustang GT500 to Lego carts to the De Lorean DMC-12, in both the original and Back to the Future designs.

Many areas of the game are open to modification. These additions can easily be added to the game, as they are compressed in the zip file format (the file extension is renamed to .ar, in order to be compatible with the game). New vehicles can be added to the game. These are generally formed by fans producing models from scratch, with real world textures applied. The game's vehicle AI (such as traffic and police vehicles) can also be redesigned. New locales (cities) can also be added to the game. Similarly, there have been modifications of the existing cities, which add components built from scratch and those already available from the game's source files. Physics modifications have also been produced, which vary the world and entity properties of the game, such as modifications which make city objects more durable or realistic. A "drive on water" patch allows the player to easily drive to previously inaccessible areas of the game, such as Alcatraz and the Marin County land mass beyond its terminating loop. Bus routes can also be created to mimic real-life bus driving, or bus racing. Most YouTube videos on Midtown Madness 2 feature Hong Kong bus routes from Kowloon Motor Bus, New World First Bus and Citybus, using vehicles that are painted in liveries of the bus companies and modeled after their real-life counterparts. Cities for different Hong Kong bus routes are also released with the basic shape of the roads, the travel routes, and some models of the buildings along the route.[1] There are also small communities of UK buses as well.