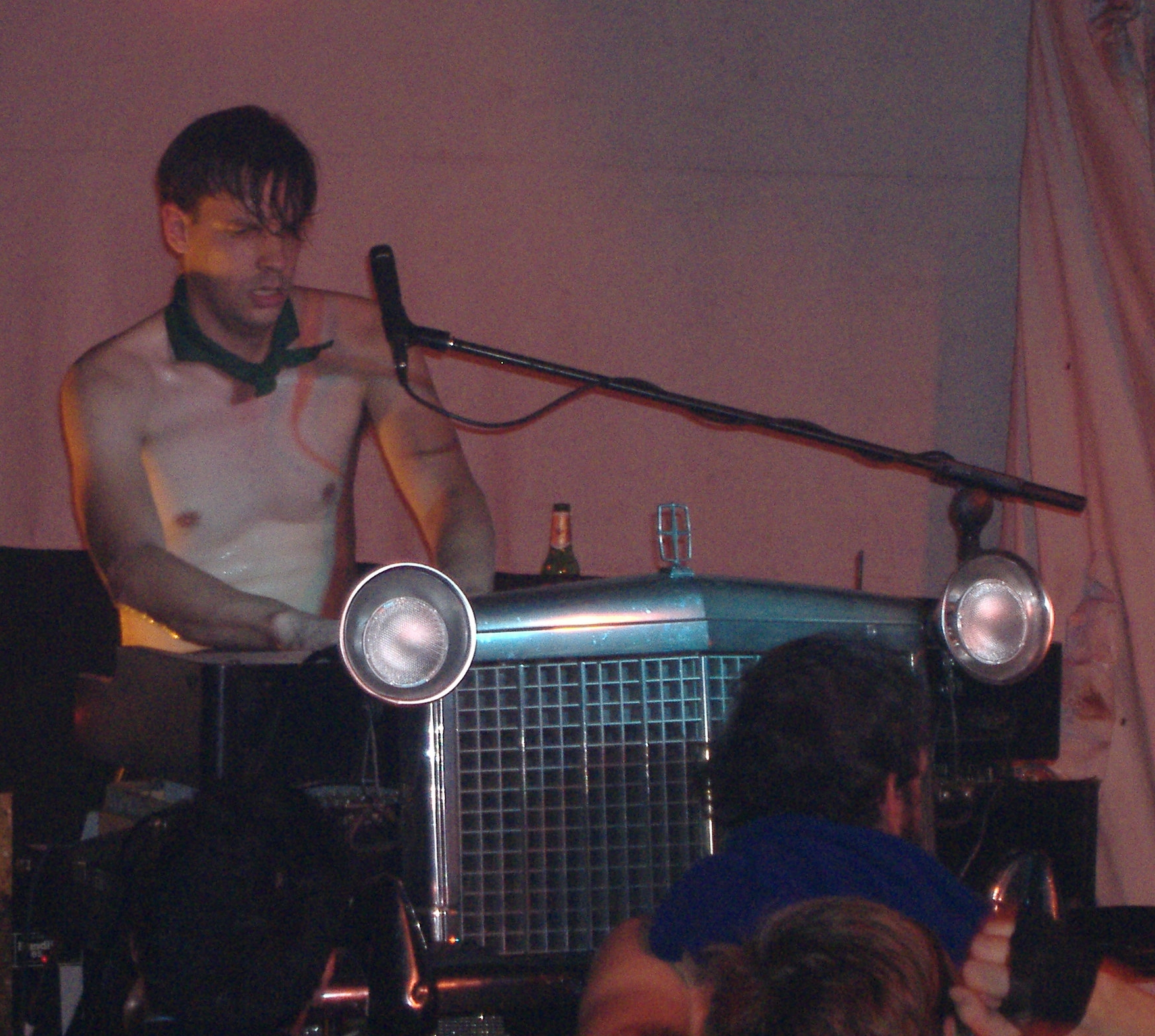 Mr. Quintron is a multi-instrumental one-man-band. During performances, Mr. Quintron utilizes a custom-made /Fender Rhodes synthesizer combo which he has had custom outfitted to resemble the body of a car, complete with working headlights and a license plate which reads “Mr. Q”.

Mr. Quintron has invented a number of innovative musical devices. His first invention was called the 'Spit Machine' a hand organ which used saliva as a tuning conductor. Describing how the apparatus works, Quintron explains that “You had to spit on a stick, like a paint stir stick, and you had two metal leads that you would touch to either end of the line of spit and then you would move the leads closer together - higher pitch - and farther apart - lower pitch. The weird thing is that, the way I built the oscillator, spit was the only thing that I could use as a conducter (sic). Lemon juice was too conductive, water not enough, etc. You actually had a lot of control over the pitch with spit - it wasn’t too sensitive - and could really play it in tune like a real organ. There was also some resistive quality to human spit that gave the oscillator some weird (sic) overtones too.”

His next invention was called the 'Disco Light Machine,' a device which, in his own words, was a “system of pick-ups that you would attach to a drum kit and the sound of the drums would light up a light inside a darkened box and this light would activate electronic sounds to go along with the drums - the harder you played the drums, the brighter the light and the louder the electronic sounds.”

His most notable instrument, however, is the ''. The Drum Buddy is a mechanically-rotating, five-oscillator, light-activated drum machine which can either be set to play automatically, or manipulated to create a number of different sound effects. The drum buddy has its own informercial, The Drum Buddy Show, which includes a number of guest appearances and performances by artists such as Quintron, Miss Pussycat, , , and the Drum Buddy Dancers.

Mr. Quintron is very enigmatic about his personal life and rarely grants interviews. It is known that he was born September 15, in Bittsburg, Germany, [ [http://www.myspace.com/mrquintron MySpace.com - QUINTRON - NEW ORLEANS, Louisiana - Autre / Autre / Autre - www.myspace.com/mrquintron ] ] where his father was stationed in the military. He grew up in Mobile, Alabama, and St. Louis, Missouri, before completing high school and moving to Chicago at the age of seventeen. While in Chicago he played in a cover band called Idol Chatter, and eventually joined the legendary Chicago experimental outfit MATH (which also featured Jodie Mechanic and Michael Colligan). During his time in Chicago he opened his first club, Milk of Burgundy.

It was in New Orleans that he first met Panacea Pussycat, then-owner of the now-defunct Pussycat Caverns. While in New Orleans he founded his own club, the Spellcaster Lodge, which was severely damaged by hurricane Katrina. 9th Ward Breakdown, a song he had written several years prior to Katrina, predicted the human cost of the disaster with uncanny accuracy. The Spellcaster Lodge was reopened in September 2006.

Mr. Quintron is known for his eccentric behavior. In 1996, during an interview for a Times-Picayune article, he told interviewer Bill Grady that he and his wife were first cousins. He also conducted the interview in a wheelchair, explaining that he had fallen from a roller coaster while at Six Flags over Mid-America. In an interview with Odyssey Magazine, Quintron qualified his unusual demeanor and explained his attitude towards the press, remarking; “I am aware that this interview is a game and I can step outside of this page to see it for what it is. You know, I may never say what I have just said in another interview ever. I can be inconsistent, unreliable, contradictory... like electricity or plumbing.”

The album "The First Two Records" is somewhat of an oddity, because although tracks from the first two records are present, compilation tracks and guitar solos are more prevalent. Also, a set tracklisting is not actually known. Bulb owner Pete Larson was asked, and said that there is no tracklist for the album. When asked about the the tracklisting, Quintron said "yea...that is a Bulb records budget re-issue. I submitted different stuff for the re-issue but the just listed the first two lps track listing. I doubt they even listened to it before release. sorry to say that I don't even know the track listing so it will remain a mystery.......Q".