History of the term 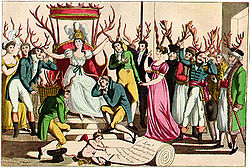 Ca. 1815 French satire on cuckoldry, which shows both men and women wearing horns

In many countries "horns" are a metaphor for suffering the infidelity of a partner, not limited to husbands in modern usage. The gesture of the horned hand can be used to insult the cuckold.[citation needed]

Cuckoldry as a fetish

The wife who enjoys cuckolding her husband is sometimes referred to as a hotwife or cuckoldress.[5]

In his book Sperm Wars, biologist Robin Baker speculated that the excitement and stimulation of the cuckolding fetish emerges from the biology of sexuality and the effects of sexual arousal on the brain. According to his theory, when a man believes that his female mate may have been sexual with another man, the man mate is prompted by biological urges to copulate with the female, in an effort to "compete" with the other man's sperm. The effects of sperm competition are well documented.[6] Further, when initiating sex, the man mate thrusts harder, deeper and longer, in efforts to remove the sperm of the other man and is biologically driven to have sex multiple times. While he may be unable to have sex more than once under usual circumstances, the cuckolded man is prone to repeated sexual efforts. Meanwhile, the wife enjoys greater sexual stimulation, first by her other lover and second by her cuckolded husband. In addition, the wife enjoys the neurochemical "highs" triggered by entering into a romantic or physical relationship with another lover. These highs include the effects of oxytocin, other neurochemicals which trigger excitement, euphoria and other feelings common to the beginnings of romantic relationships. The effect from this gives the female a natural high, which can offset the negative physical symptoms like body pain, headache, and anxiety. These neurochemicals change over time and as a relationship persists, with neurochemicals changing to ones that promote bonding, planning and nurturing. When a new lover is taken, it triggers the neurochemicals of a new relationship, bringing home excitement to her husband.[7]

The above exposition conflicts with the hypothesized foundations for jealousy in evolutionary psychology, which is rooted in the idea that men specifically will react jealously to sexual infidelity on the parts of their mates.[8]