New York City Center
This article is about the New York concert hall. For other uses, see City Center (disambiguation).

New York City Center (previously known as City Center of Music and Drama[1] and also known as New York City Center 55th Street Theater,[2]) is a 2,750-seat Moorish Revival theater located at 131 West 55th Street between 6th and 7th Avenues in Manhattan, New York City. It is one block south of Carnegie Hall. City Center is especially known as a performing home for several major dance companies as well as the Encores! musical theater series and most recently the Fall for Dance Festival. The facility houses the 2,753 seat main stage, two smaller theatres, four studios and a 12-story office tower.[3]

The New York City Center, built in 1923, was designed by architect Harry P. Knowles and the firm of Clinton & Russell,[2] and was originally called the Mecca Temple, by the Ancient Arabic Order of the Nobles of the Mystic Shrine, more commonly known as Shriners. The Shriners had previously held their meetings at Carnegie Hall. According to Broadway lore, Carnegie Hall management was disturbed by the amount of cigar smoke generated during Shriners meetings and evicted them.[citation needed] Although the Shriners owned a clubhouse at 107 West 45th Street, large meetings had earlier been held in Carnegie Hall and in the concert hall of Madison Square Garden[5] (the 1890 Stanford White building). 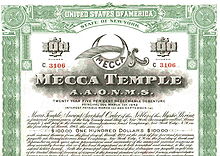 The pictured bond was issued for the construction of the building. The elaborate engraving is typical of certificated bonds, in this case using the fraternal organization's logo, rather than neoclassical human figures, idealized versions of the corporation's business, or architectural elements, all common decorations on bonds. Coupons from this bond can be seen under Coupon. The bond and the coupons have no economic value today because the corporation became insolvent within a few years of the Wall Street Crash of 1929.

Home for the performing arts

After the financial crash of 1929 the Mecca Shriners were unable to pay the taxes on the building and it became city property.By the early 1940s, the building was slated for demolition when New York City Council President Newbold Morris and Mayor Fiorello La Guardia decided to convert the building into a home for the performing arts. On December 11, 1943, with publicist and future producer Jean Dalrymple in charge as the volunteer director of public relations, the New York City Center of Music and Drama opened its doors with a concert by the New York Philharmonic. The Star Spangled Banner was conducted that evening by none other than Mayor La Guardia.

Each season, from the 1940s through the 1960s, City Center presented numerous music and theatrical events with many renowned performers appearing there. Helen Hayes, Gwen Verdon, Charlton Heston, Celeste Holm, Marcel Marceau, Bob Fosse, Tallulah Bankhead, Vincent Price, Jessica Tandy, Hume Cronyn and Uta Hagen have all graced the City Center stage. The center was also famous as an inexpensive venue for revivals of dozens of classic and then-recent Broadway musicals, among them Oklahoma!, Carousel, South Pacific, and Show Boat.

Since the departure of the opera and ballet companies from the 55th Street building, the corporate name City Center of Music and Drama has referred to the umbrella organization for those Lincoln Center companies.

After the shift, the City Center theater on 55th was reorganized as The City Center 55th Street Theater Foundation, under Howard M. Squadron, and the building given landmark status.*

In 1984, the Manhattan Theatre Club made New York City Center's lower level (originally a 136'x96' banquet hall) their home. The Manhattan Theater Club performance space comprises a 299-seat theater and a 150-seat theater. Later in the 1980s, the main stage was extensively renovated in connection with the adjacent construction of the high-rise mixed-use building, Cityspire: "To complete the deal, Eichner Properties agreed to contribute $3 million to the City Opera and $3 million to the City Ballet, which covered the purchase of the air rights ... and to spend $5.5 million to renovate the theater in exchange for the 20 percent space bonus."[11] The renovations were designed by the architect Bernard Rothzeid.[2] 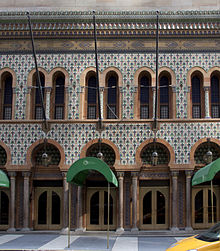 View of the entrance area with tiles as it appeared in 2010. Renovation work will add a glass awning

In 1994, New York City Center launched its first Encores! Great American Musicals in Concert productions. The popular series, which continues to this day, spawned the Broadway revivals of Chicago, Wonderful Town, The Apple Tree, Gypsy (2008), and Finian's Rainbow. Those Broadway productions were produced independently of City Center, but with many of the artists and creators of the Encores! performances.

In 2000, the American Theatre Wing presented a Tony Honors for Excellence in Theatre award to City Center for the Encores! series.

In 2010, City Center started a $75 million project to renovate its landmark building. The design will be managed by Polshek Partnership Architects and will include improved sightlines, improved seating and a new canopy as well as restoration of historical elements such as mosaic walls, arabesque ceilings and the original box-office lobby. The construction work will occur from April to September, 2010 and from mid-March to October 2011 completion.[3]