Common room
This article is about a recreational space. For student organizational bodies in universities, see Common room (university). 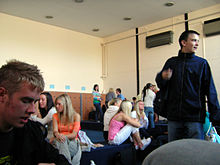 The phrase common room is used especially in British and Canadian English to describe a type of shared lounge, most often found in dormitories, at (for example) universities, colleges,[1] military bases, hospitals, rest homes, hostels, and even minimum-security prisons. It is generally connected to several private rooms, and may incorporate a bathroom. However, they may also be found in day schools and sixth forms.[citation needed]

Depending on its location and purpose of use, a common room may be known by another name. For instance, in mental hospitals, where access is usually restricted to the daytime hours, this type of room is often called a "day room".[citation needed]