Ochna serrulata (commonly known as the mall-leaved plane, carnival ochna, Bird's Eye Bush or Mickey Mouse bush due to the plant's bright-red sepals, which resemble the face of Mickey Mouse) is an ornamental garden plant of the Ochnaceae family which is indigenous to South Africa. Planted in southern African gardens, it makes an attractive, indigenous ornamental plant, but it has also been planted abroad and become highly invasive in parts of eastern Australia.[1][2] [2]

Ochna serrulata was first described by the German naturalist Christian Ferdinand Friedrich Hochstetter, and given its current binomial name by Wilhelm Gerhard Walpers. Its specific epithet is derived from the Latin serrula "little saw",[3] and refers to its fine-toothed leaf margins. 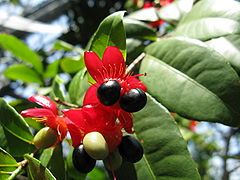 An Ochna serrulata with fruits and petals. The plant's bright-red sepals that resembles the face of Mickey Mouse can be seen. 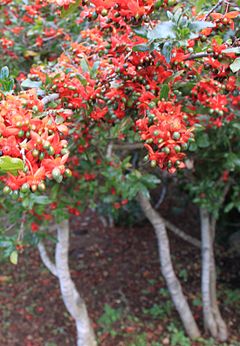 Ochna serrulata is a small shrub growing to between 1 and 2 m (3–7 ft) high, although it may occasionally become a small tree up to 6 m (20 ft) high. The narrow leaves are oblong to elliptic and measure 3–6 cm (1.2-2.4 in) in length by 0.8-1.5 cm wide, and are shiny green with fine toothed serrations along the leaf edges. During the spring, the shrub's fragrant yellow blossoms that appear are usually around 2 cm (0.8 in) in diameter. Though, the petals tend to drop soon after they bloom. Five or six fruits grow from the plant, which are attached to the sepals. While the fruit is developing, the sepals enlarge and turn bright red, in most cases turning the whole plant red. The 0.5 cm diameter fruit are initially pale green and turn black.[4] In places including Kirstenbosch, the fruits on the plant start ripening in the early summer, while the red sepals last until around late summer. The flowers usually attract bees and butterflies, while the birds tend to eat the fruits from the plant.[2] The seeds can be released by birds and water.[1]

The plant is native to the forest areas of South Africa. It occurs throughout the country, from Cape Town in the south, along the east coast as far as Kwazulu-Natal, and inland through Swaziland and Gauteng. This tough, adaptable shrub grows in sunny, open positions as well as in the shade of deep forest.

It has been widely cultivated outside of South Africa as an ornamental garden plant, and has become a weed in New South Wales and southern Queensland in eastern Australia, where it is found near human habitation in and around large towns and cities.[4]

This plant makes a very attractive indigenous shrub for South African gardens. It is hardy and resilient and can be planted both in the sun as well as in shady areas. It is initially slow-growing, but speeds up once it is established, especially if it is watered frequently. This is a very good plant for attracting birds to the garden. It does not tolerate frost well, but adapts well to light pruning and is attractive throughout the year, even when not in fruit.

Ochna serrulata is also one of several cultivated plants in Hawaii for their colorful flowers and unusual fruits.[5] Originally, Ochna serrulata was used as symbol in various places around the world, and it is used at some festivals/holidays.[6]