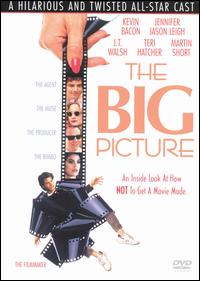 "The Big Picture" was a movie starring and directed by .

In a fictionalized version of itself, Nick Chapman is an up and coming film director hot off the win of a student academy award for his short film. No sooner does the award bring him into the limelight when it captures the attention of a movie executive () who offers Nick a deal to make his dream picture: a character-driven drama taking place in a cabin during the winter season. Everything seems all well and good to Nick, who's also got a good girlfriend () by his side and his best friend () always there to lend a hand. But when Nick sees his vision corrupted, his deal just disappearing into thin air because of corporate changes and a seduction to the lifestyle, Nick might be changing on his friends and family. It doesn't really help when he's got a smarmy agent () whose promise seems empty, a starlet () playing with his mind and the grim reminder that all of his much less-talented and much more self-satisfied classmates are working successfully in , Nick is finally getting a chance to look at the big picture at hand. also stars in the film as a kooky but loyal friend and classmate of Nick's, who ultimately proves to be a career savior.