The trademark registration for Descent was allowed to lapse by Interplay in 2002[1] and was re-registered in 2008.[2]

The game begins with a briefing between a bald anonymous executive (in later games named Dravis) of the Post Terran Minerals Corporation (PTMC) and the player, a "Material Defender" (revealed as MD1032 in the briefings, also using the callsign "Vertigo-1") hired on a mercenary basis to eliminate the threat of an alien computer virus infecting the robots used for off-world mining operations. The game progresses through the Solar system, from the Moon to Mercury, then outbound towards Pluto's moon Charon. After defeating the boss robot on Charon, the Material Defender is informed he cannot return to the PTMC's headquarters in Earth orbit, as there is a chance his ship may be infected with the same virus as the defeated robots. His employer also mentions that PTMC has lost contact with their deep-space installations outside the Solar system, hinting at what is going to happen in the sequel. 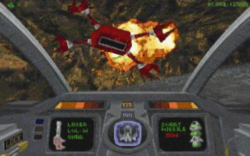 The game requires the player to navigate labyrinthine mines while fighting virus-infected robots. The player is given the clear objective to find and destroy each mine's reactor core and escape before the mine is destroyed by the meltdown. To obtain access to the reactor, the player must collect the blue, yellow, and red access keys for each location. As an optional objective, the player can also choose to rescue PTMC workers that were taken hostage by the infected robots.

Descent also features a complementary points system. Players can score points by destroying enemy robots, picking up power-ups, and detonating the reactor. Bonus points are awarded on completion of each level. These bonus points are based on the player's shield and energy count, the skill level played, and a combination of picking up any hostages and safely rescuing them.

Descent demands that players keep their sense of orientation in a fully 3D environment with a flight model featuring six degrees of freedom in zero-gravity. Traditional FPS games require the player to only control two axes and their heading. By employing six degrees of movement, the player is given additional control for vertical movement and banking, introducing more movement controls than traditional FPS games. Descent's unique movement controls also increase the possibility for players to experience motion sickness or nausea – a common complaint found in reviews for the game.[3][4]

The player is given the choice to natively use a keyboard, mouse, joystick, or combinations of these devices. Use of a second input device with or without a keyboard provides a greater amount of control due to the additional degrees of movement. The game also supports the use of two independently configured joysticks.

Like DOOM, Descent provides a navigational wire frame map that displays any area of the mine visited or seen by the player, which revolves around the player's position. Use of the slide controls (commonly the joystick "Hat" switch) allows the player to navigate to areas of the map away from their current location. The use of wire-frame models meant that areas at varying distances would appear to mix together when overlapping. This was overcome in Descent 3 with the use of opaque wall brushes and lighting closely matching that found in-game. Additionally, Descent 3's map system allowed the player the ability to move the viewpoint through the tunnels in map mode.

Descent features 30 levels, three of which are secret levels. Each level was based in a mine located in various locations in the solar system. The first three levels begin on the Moon, the next two on Venus, and two more on Mercury. The seventh level features the game's first boss rather than a reactor, and was the last level of the shareware. In the full version, the player moves on through twenty more mines in an outward pattern from Earth: Mars, Io, Europa, Ganymede, Titan, Hyperion, Tethys, Miranda, Oberon, Triton, Nereid, Pluto, and the final level and boss fight on Charon.

The primary weapons in Descent use energy, with the exception of the Vulcan cannon, which uses traditional ammunition. The player's spacecraft has a maximum energy capacity of 200 units; energy is replenished from energy power-ups floating in the mines or ejected by destroyed enemies. Energy can also be topped up (to a maximum of 100) units at "energy centers," permanent recharge locations.

Descent uses shield power as health. Like energy, the ship "maxes out" at 200 shield units; unlike energy, shields can only be restored by acquiring "shield orb" power-ups. If the player finishes a level with shield power or energy power below 100 units, the ship will be recharged to 100 units for the next level.

When the player's ship is destroyed, all acquired power-ups and weapons are strewn about the area as power-ups.

Descent offers competitive multiplayer game play for up to 8 players over a LAN and is touted as being one of the first games to allow initiating sessions conveniently from a menu within the game as well as on-the-fly joining of multiplayer games, whereas in many similar games of the era, such as Doom, it is presumed that all players have to be queued prior to initiating the match.

With the advent of Internet IPX clients such as Kali and Kahn, Descent and Descent II were increasingly played over the Internet. Descent II was especially popular online due to its support for short packets and variable packet rate, which significantly improved quality of play over the slower Internet connections prevalent at the time.

Since then, Descent source ports have added UDP support.

The original Descent runs under DOS and is (with some tweaking) playable on 386-based PCs at 33 MHz. However, for good-quality rendering with full-screen view and better than minimal render depth, a 486 running at least 66 MHz is required. For maximum rendering quality, a faster Pentium CPU is required; with the release of the Pentium, the performance requirements were no longer an issue. While Descent generally runs fine on PC's using Windows 95, it is not compatible with Windows XP.[5] Descent was ported to Apple's Power Macintosh in 1996 and both versions support multiplayer network play over a variety of protocols. A console port of Descent was created for the Sony PlayStation. Another console port for the Sega Saturn was developed and was internally playable, but never released. Interplay, the publisher, as well as Parallax, the developer lost faith in the economic viability of the project. [Mike Kulas, Parallax Software][citation needed]

The shareware version of Descent was released in December 1994 with the full version released three months later, just over a year after id Software's Doom (December 1993). Like most games of its era, Descent uses a software renderer, because mainstream 3D graphics accelerator cards did not exist at the time. However, while most of its contemporaries—Doom included—use sprites, to render enemies, Descent renders enemies in full 3D using polygon meshes, a technique employed by Quake the following year. (However, Descent does use sprites for power-ups and the hostages.) Unlike Doom and Quake, Descent does not use BSP trees for visibility culling (to speed up rendering), instead taking advantage of the game's use of collections of cubes to form rooms and tunnels. This system was very efficient, and made possible one of the first true 3D textured environments in a video game. On lower-end systems, detail levels could be reduced to cut out some of the smaller polygons on robots and render solid color blocks in place of textures on distant walls and across passageways in the distance.

The original Descent uses indexed 8-bit color in DOS's display mode 13h, using 320 × 200 resolution. Unlike its sequel, it uses only one 256-color set during gameplay, rather than a unique set for each group of levels; these colors tinge red during damage and purple during fusion charging. The Macintosh and later PC versions allow higher resolutions, such as 640 × 480. The default engine uses a software renderer in which the perspective transformation for texture mapping is only performed once every 32 pixels, causing textures to appear to pop or shift when viewed from certain angles. The software renderer also uses nearest-neighbor texture filtering, as opposed to bilinear filtering or trilinear filtering used by modern video cards. Nearest-neighbor texture filtering causes aliasing artifacts, such as blocky textures. These rendering compromises allowed the game to be played on most PCs contemporary with it, while better rendering techniques would have prevented it from being run on any but the most powerful gaming PCs in 1995.

The engine for Descent is a portal rendering engine, operating on the premise of interconnected cube-shaped sectors. Sides of cubes can be attached to other cubes, or display up to two texture maps. Cubes can be deformed so long as they remain convex. To create effects like doors and see-through grating, walls could be placed at the connected sides of two cubes. Descent introduced an elaborate static lighting scheme as well as simple dynamic lighting, where the environment could be lit with flares—another advancement compared to Doom. (Descent II later added more dynamic lighting effects, including the ability to shoot out light fixtures.)

A commercial Descent level editor, created by Bryan Aamot of Brainware and was published by Interplay Productions. Users can create their own single-player and multi-player levels with the program and then play them.

A popular add-on for Descent, containing all of the entries from a level design competition held by Interplay in 1995. A viewer is included, allowing the player to see a preview of each map, as well as selecting ones that received a "Top 10" award or an honorable mention.

A bundle released on the one-year anniversary of the original game's debut, the Anniversary Edition featured Descent, the Levels Of The World add-on, and several additional levels created by Parallax.

Interplay announced that there will be a version of Descent for the WiiWare in the winter of 2010.[8]

In 1997, Interplay released Descent to Undermountain, an RPG that used a modified version of the Descent graphics engine, but that was otherwise unrelated as it took place in a Medieval fantasy setting.

Perhaps the most well-known "Descent clone" was Forsaken, which was released in 1998 for PC, PlayStation, and Nintendo 64. Forsaken had similar graphics to Descent, and almost identical gameplay.[9]

Descent: FreeSpace – The Great War was released by Volition, Inc. in 1998. It shared the Descent name, but otherwise had no connection to the series; it was given the "Descent" prefix to avoid trademark issues[10] (in Europe, it was released as Conflict: FreeSpace – The Great War). FreeSpace was a space simulator, and while it was still technically a 3D shooter, it did not retain Descent's characteristic "six degrees of freedom" control scheme, save for a cheat code that would force the player's ship to loosely mimic Descent's physics. Some early drafts of the FreeSpace story had the pilot searching for Descent's "Material Defender"[citation needed], but the story of the finished game was unrelated.

Around that time, Volition also began work on Descent 4, but development was canceled in 2000, owing mostly to disappointing sales of Descent 3.[citation needed] Descent 4 may have been originally planned as a prequel to Descent, and reportedly served as a basis for the first-person shooter Red Faction. Similarities include a reference to a "humans first" strike in Descent's opening briefing, and plot points such as nanotechnology, an evil faceless corporation, and the virus they are attempting to harness. Mike Kulas (president of Volition) stated in an interview that the Red Faction and Descent universes are strictly separate, however he did admit that code intended for Descent 4 had been used in Red Faction.[11]