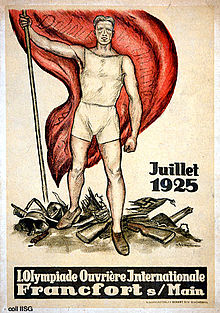 1925 Poster for the Workers' Olympiad in Frankfurt

An international meeting of workers sports associations had been held in Ghent, Belgium, in 1913. However, the First World War put the build-up of an international workers' sport organisation on hold. After the war two Belgians, Gaston Bridoux and Jules Devlieger, took initiative to revive the cooperation. Preparatory meetings were held in Seraing, Belgium in 1919 and in Paris, France, during Easter 1920. The founding congress of the international took place in Lucerne September 13-September 14, 1920. During the foundation, the French and Belgian delegations urged that the word 'Socialist' be omitted from the name of the organisation, in order to attract a broader following.[3]

The organisation upheld a policy of neutrality towards party organisations, a policy inherited from the German workers' sports movement (which tried to steer away from the fractional conflicts between the German socialists). This policy was however challenged by the communists, which claimed that the workers' sport movement could not abstain from taking part in revolutionary struggle. In 1921, the third congress of the Communist International decided to form a parallel sport international. In August 1921, the Sportintern was founded. Sportintern launched fierce political attacks against the Lucerne international. Its Czechoslovak section had suffered a split in July 1921, as the communists deserted it.[3]

At the second congress of the Lucerne International, held in Leipzig 1922, the French delegation argued in favour of unification between the two Internationals. This policy was not supported by the congress. The following year, the French affiliate FST decided to shift its membership to Sportintern.[3]

Ahead of the 1925 Workers Olympiad, the Sportintern appealed to the Lucerne International that four Sportintern delegations (France, Soviet Union, Norway, Czechoslovakia) should be allowed to participate. Discussions lingered on within the Lucerne International, but after communist sportsmen had made a public protest at a German Workers Sports Festival in Karlsbad in 1924, it was decided that the Sportintern would be barred from the Workers Olympiad. Likewise SASI barred its affiliates for participating in the 1928 Spartakiad organised by Sportintern.[3]

Politically, SASI was supported by the International Federation of Trade Unions and the Labour and Socialist International.[4]

The main activity of SASI was the organizing of the International Workers Olympiads, portrayed as a socialist alternative to the 'bourgeois' Olympics. At the Workers Olympiads only the red flag was used, rather than national flags.

As of 1931, SASI claimed the following membership figures[13]: