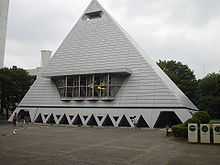 Mejiro (目白?) is an upscale residential district of Toshima, Tokyo, Japan, centered at Mejiro Station of Yamanote Line. The district's name is after Mejiro Fudō, which is one of the Goshiki Fudō.

Mejiro is home to the prestigious Gakushuin University. The university's predecessor was established in 1877 to educate the children of Japanese nobilities. Its notable alumni include most members of the present Imperial House of Japan as well as the 92nd Prime Minister of Japan Taro Aso.