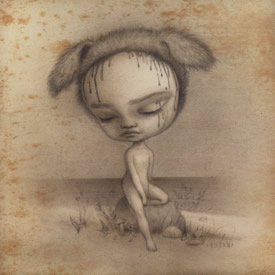 "Sweet Heart Dealer" is the debut album by the rock band , released on . Originally scheduled for release as "Butcherbourne", the album was retitled at the last minute, and pared down from 11 tracks to seven during mixing at Old Blue Studios in Los Angeles. The songs "A Constant Reminder", "Surgeon General", "Here On Earth" and "Funeral Gown" were recorded then omitted and have yet to be released.

The album was born from singer 's "melancholy unconscious private moments", her experiments with in the period immediately prior to the band's formation, and from various outside sources: "Crispin Glover" apparently makes a parable, about the concealment and internalization of violence, of the 1986 film ""; while "Alexander the Burn Victim" centers on conflicting emotions concerning the loss of a loved one, and was inspired by the .

Robert Smith of described Scarling's music as "dark, desperate, chaotic, gorgeous pop music, the sound of the end of the world" and nominated "Sweet Heart Dealer" for the 2004 .