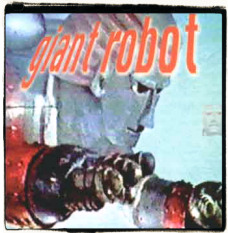 Giant Robot was an by the band Giant Robot, led by guitarist ; the album was released in . Buckethead had released a solo album entitled "Giant Robot" in , and to distinguish the two albums, fans refer to this recording as "Giant Robot NTT", after the recording company, NTT Records. The album contains numerous tracks from other Buckethead albums, such as "I Love My Parents" from the album "", and "Jowls" and "Scapula" that later appeared on the album "Monsters and Robots". The album contains numerous sound clips from films in its songs, for instance the track "Well, Well, Well" contains a clip from A Clockwork Orange when Alex encounters his former friends, the Droogs as officers. The album is rare and is no longer being printed (OOP). It is legally available to download free at http://www.buckethead-coop.com/downloads.html, and it appears occasionally in auctions.