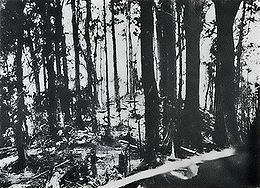 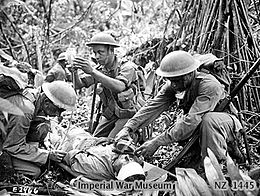 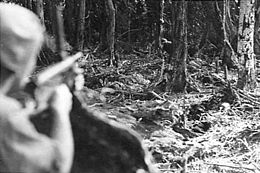 April 5, 1945: The view forward of Australian positions on Slater's Knoll, Bougainville; the soldier in the foreground is aiming an Owen submachinegun.

Some key locations in the campaign.

The Bougainville campaign was fought by the Allies in the South Pacific during World War II to regain control of the island of Bougainville from the Japanese forces who had occupied it in 1942. During their occupation the Japanese constructed naval aircraft bases in the north, east, and south of the island; but none in the west. They developed a naval anchorage at Tonolei Harbor near Buin, their largest base, on the southern coastal plain of Bougainville. On the nearby Treasury and Shortland Islands they built airfields, naval bases and anchorages. These bases helped protect Rabaul , the major Japanese garrison and naval base in New Guinea, while allowing continued expansion to the south-east, down the Solomon Islands chain, to Guadalcanal.

The Allied campaign, which had two distinct phases, began on November 1, 1943 and ended on August 21, 1945 with the surrender of the Japanese.

In March-April 1942, the Japanese landed on Bougainville and began constructing a number of airfields across the island.[6] The main airfields were on Buka Island, the Bonis Peninsula in the north, at Kahili and Kara, in the south, and Kieta on the east coast,[6] while a naval anchorage was constructed at Tonolei Harbor near Buin on the southern coastal plain, along with anchorages on the Shortland Islands group.[7]

The airfield at Kahili was known by the Japanese as Buin Airfield,[citation needed] and to its south was an airfield on Ballale Island in the Shortland Islands. These bases allowed the Japanese to conduct operations in the southern Solomon Islands and to attack the Allied lines of communication between the United States, Australia and the Southwest Pacific Area.[6]

Following the American success at Guadalcanal in February 1943, allied forces advanced up the Solomon Island chain and commenced the Bougainville campaign as part of the larger Operation Cartwheel.

At the opening of the campaign, estimates of Japanese strength on Bougainville varied widely, ranging between 42,000 to 65,000 Army, Navy, and labor personnel.[3] In November 1943 United States Marine forces landed at Cape Torokina on Bougainville[6] and established a beachhead within which the Allies eventually constructed three airfields. The United States Marine invasion force was replaced by U.S. Army soldiers in January 1944,[6] who were then replaced by Australian soldiers in October 1944.[8] The campaign ended with the surrender of Japanese in August 1945.[9]

The first phase of allied operations to retake Bougainville (operation Cherry Blossom)[citation needed] from the Japanese 17th Army began with landings at Cape Torokina by the U.S. Marine 3rd Division, I Marine Amphibious Corps, on November 1, 1943.[6] The Allies established a beachhead around Cape Torokina for the construction of an airfield within fighter range of Rabaul. Allied forces did not plan at this time to try to capture the entire island of Bougainville from Japanese forces. An attempt by the Imperial Japanese Navy to attack the U.S. landing forces was defeated by the U.S. Navy in the Battle of Empress Augusta Bay, on November 1–2. A subsequent attempt by Japanese land forces to attack the Allied beachhead was defeated in the Battle of Koromokina Lagoon.

From November 6–19, 1943, I Marine Amphibious Corps landed the remaining regiment of the 3rd Marine Division and the U.S. Army's 37th Infantry Division to expand the beachhead. Protracted and often bitter jungle warfare followed, with many casualties resulting from malaria and other tropical diseases. Except for patrol skirmishes, all of the combat to expand the beachhead occurred in the Marine sector. Operations resulted in the Battle for Piva Trail, Battle of the Coconut Grove, Battle of Piva Forks, and the Battle of Hill 600A.

In November and December the Japanese emplaced field artillery on the high ground around the beachhead, concentrated in a group of hills along the Torokina River overlooking the eastern perimeter. They shelled the beachhead, targeting the airstrips and the supply dumps. The 3d Marine Division extended its lines to include the hills in a series of operations that lasted from December 9–27. One hill, "Hellzapoppin Ridge", was a natural fortress 300 ft (91 m) long, with sharp slopes and a narrow crest that overlooked much of the beachhead. The Japanese constructed extensive artillery positions on the reverse slopes using natural and artificial camouflage. The 21st Marines attacked Hellzapoppin Ridge but were driven off on December 18. Several air strikes missed the narrow ridge completely. Finally, co-ordinated air, artillery, and infantry attacks resulted in the capture of Hellzapoppin Ridge on Christmas Day.

On December 15, 1943, the I Marine Amphibious Corps was replaced by the Army's XIV Corps[6] and on December 28, the 3rd Marine Division by the Americal Division. The XIV Corps defended the beachhead against a major Japanese counterattack from March 9–17, 1944, at Hill 700 and Cannon Hill, which were defended by the Ohio 37th Infantry Division, and Hill 260, which was defended by the Americal Division. The counterattack was defeated with heavy losses for the Japanese army, which then withdrew the majority of its force into the deep interior and to the north and south ends of Bougainville.[10]

On April 5, 1944, the Americal Division's 132nd Infantry Regiment, after establishing patrol sweeps along Empress Augusta Bay, successfully launched an attack to capture the Japanese-held village of Mavavia. Two days later, while continuing a sweep for enemy forces, the Regiment encountered prepared enemy defenses, where they destroyed some twenty Japanese pillboxes using pole charges and bazookas. Later, the 132nd, together with elements of the Fiji Defence Force, was tasked with securing the heights west of Saua River. The Regiment and its allies captured Hills 155, 165, 500, and 501 in fierce fighting that lasted until April 18, when the last of the Japanese defenders were killed or driven off.[11]

The Japanese, isolated and cut off from outside assistance, primarily concentrated on survival, including the development of farms throughout the island.[10] The Americans were reinforced by the 93rd Infantry Division, the first African American infantry unit to see action in World War II. The Allies concentrated on constructing multiple airfields in the beachhead, from which they conducted fighter and bomber operations over Rabaul, Kavieng and other Japanese-held bases in the South Pacific area. Air support over Bougainville was provided largely by the Royal New Zealand Air Force, the US Marine Corps aviation squadrons, and the USAAF, under the control the Air Solomons Command ("AIRSOLS").

Australian intelligence officers estimated after studying records that 8,200 Japanese troops were killed in combat during the American phase of operations, and 16,600 more died of disease or malnutrition.[12]

Between October and December 1944, the U.S. ground forces handed over operations on the island to the main body of the Australian II Corps, a Militia formation.[8] The Australian 3rd Division and the 11th Brigade were on Bougainville, reinforced by the Fiji Infantry Regiment. The 23rd Brigade garrisoned neighbouring islands.[13] The Australians determined that Japanese forces on Bougainville, now numbering approximately 40,000, still had approximately 20% of their personnel in forward positions and that although understrength, were organized in combat-capable formations, including the 38th Independent Mixed Brigade and the 6th Division. The Australian II Corps adopted an aggressive posture to overwhelm and reduce or destroy these forces.[12]

So began the second phase of the Allied campaign. Opening combat as early as November 29 and the offensive on December 30, three separate drives developed: in the north, it was planned that Japanese forces would be forced into the narrow Bonis Peninsula and contained; in the centre the seizure of Pearl Ridge would give the Australians control of the east–west thoroughfares and protection against further counterattacks, while also opening the way for a drive to the east coast; and the main campaign in the south, where the bulk of the Japanese forces were concentrated at Buin.[14]

Following the capture of Pearl Ridge in the central sector in December 1944, the focus of the Australian campaign moved to the northern and southern sectors, with operations in the central sector being confined to patrols along the Numa Numa trail.[15] In the north the Australians advanced along the coast towards the Genga River while sending patrols inland to flush the Japanese out of the high ground.[16] After capturing Tsimba Ridge in February 1945 they continued to advance on Ratsua, forcing the Japanese into the Bonis Peninsula. Coming up against formidable defences, however, an attempt was made to outflank the Japanese positions by landing an amphibious force at Porton Plantation in June, however, this failed and as a result it was decided to suspend the drive into the Bonis Peninsula and instead contain the Japanese along the Ratsua front[17] while resources were diverted to the southern sector for the drive towards Buin. In the southern sector, after a brief but costly counterattack by the Japanese at Slater's Knoll, the Australians had managed to gain the upper hand and advanced steadily to the south, crossing the Hongorai,[18] Hari and Mobai Rivers. However, shortly after reaching the Mivo River their advance came to a halt as torrential rain and flooding washed away many of the bridges and roads upon which the Australian line of communications was dependent. This rendered large scale infantry operations impossible for almost a month and it was not until late July and into early August that the Australians were able to resume patrolling across the Mivo River.[19]

Combat operations on Bougainville ended with the surrender of Japanese forces on Bougainville on 21 August 1945. The Empire surrendered in Tokyo Bay on 2 September 1945. The last phase of the campaign saw 516 Australians killed and another 1,572 wounded. 8,500 Japanese were killed at the same time,[20] while disease and malnutrition killed another 9,800 and some 23,500 troops and laborers surrendered at the end of the war.[12]

Three Victoria Crosses were awarded during the campaign, one to a Fijian and two to Australians. Corporal Sefanaia Sukanaivalu of Fiji received the award posthumously for his bravery at Mawaraka on June 23, 1944.[21] Corporal Reg Rattey received the award for his actions during the fighting around Slater's Knoll on 22 March 1945, while Private Frank Partridge earned his in one of the final actions of the campaign on 24 July 1945 during fighting along the Ratsua front.[22][23] Both Rattey's and Partridge's VCs were the last VCs awarded to Australians during the war, and Partridge's the only award to a member of the Militia (Rattey was a member of the AIF, serving in a Militia battalion).[24]

The U.S. Navy escort aircraft carrier USS Bougainville (CVE-100), in commission from 1944 to 1946, was named for the Bougainville campaign.