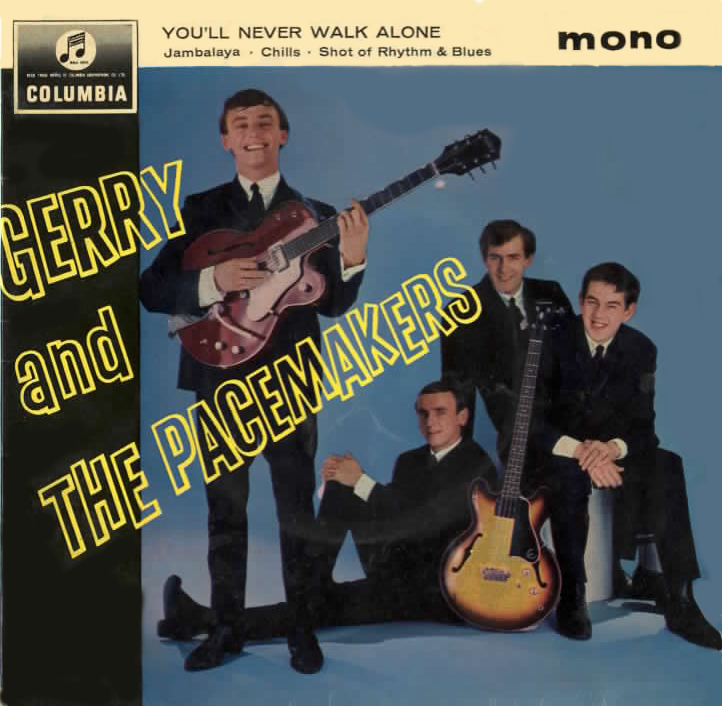 Gerry and The Pacemakers were a British group during the 1960s. In common with , they came from and were managed by .

formed the group in 1959 with his brother, Fred, Les Chadwick and Arthur McMahon. They rivalled the Beatles early in their career, playing in the same areas of , and , . McMahon (known as Arthur Mack) was replaced on by Les Maguire around 1961. They are known to have rehearsed at shipping yard at .

The band was the second to sign with , who later signed them with Columbia Records (a sister label to label under ). They began recording in early 1963 with "", a written by that had turned down and one that The Beatles chose not to release (they did record the song but chose to release their own song "Please Please Me"). The song was produced by and became a number one hit in the UK, until being replaced at the top by "", The Beatles' third single.

Gerry and The Pacemakers' next two singles, Murray's "I Like It" and 's "You'll Never Walk Alone", both also reached number one in the . Never before had the first three singles by a performer all reached the top spot (the feat would not be duplicated until did it in the 1980s). "You'll Never Walk Alone" had been a favourite of Gerry Marsden's since seeing "Carousel" growing up (he turned down the Beatles' "" for this slot, which then became the first hit for ). It soon became the signature tune of Liverpool Football Club. To this day, the song remains a football anthem, there and elsewhere, a phenomenon due to Gerry Marsden, rather than its Broadway composers.

Despite this early success, Gerry & The Pacemakers never had another number one single in the UK. Gerry Marsden began writing most of their own songs, including "It's Gonna Be All Right", "I'm the One", and "", as well as their first and biggest U.S. hit, "Don't Let the Sun Catch You Crying", which peaked at #4, and which Gerry Marsden initially gave to Decca recording artist in 1963. She recorded the song (Decca F11824), but without commercial success. They also starred in an early 1965 called "" (sometimes referred to as "Gerry & The Pacemakers' version of ""), for which Marsden wrote much of the . The title song was revived in the 1980s as a charity single for a ferry disaster appeal, giving Gerry another British number one in association with other Liverpool stars, including and Frankie Goes to Hollywood's .

In the US, they were signed by the small New York independent in 1963 and Laurie issued four singles during 1963 without success.

When The Beatles broke through in January, 1964, Laurie's next regular single release of "Don't Let The Sun Catch You Crying" became a big hit and during 1964, Laurie coupled "How Do You Do It?" with "You'll Never Walk Alone" (Laurie 3261) and "I Like It" with "Jambalaya" (Laurie 3271) with great success.

By late 1965, their popularity was rapidly declining on both sides of the Atlantic. They disbanded in October 1966, with much of their latter recorded material never released in the UK.

In the , a different series of Gerry and The Pacemakers' singles was issued, as their label created more albums, and at least two singles, which were never issued in Britain. This was a standard practice at the time; it also happened with and the . Peak chart positions are from the .