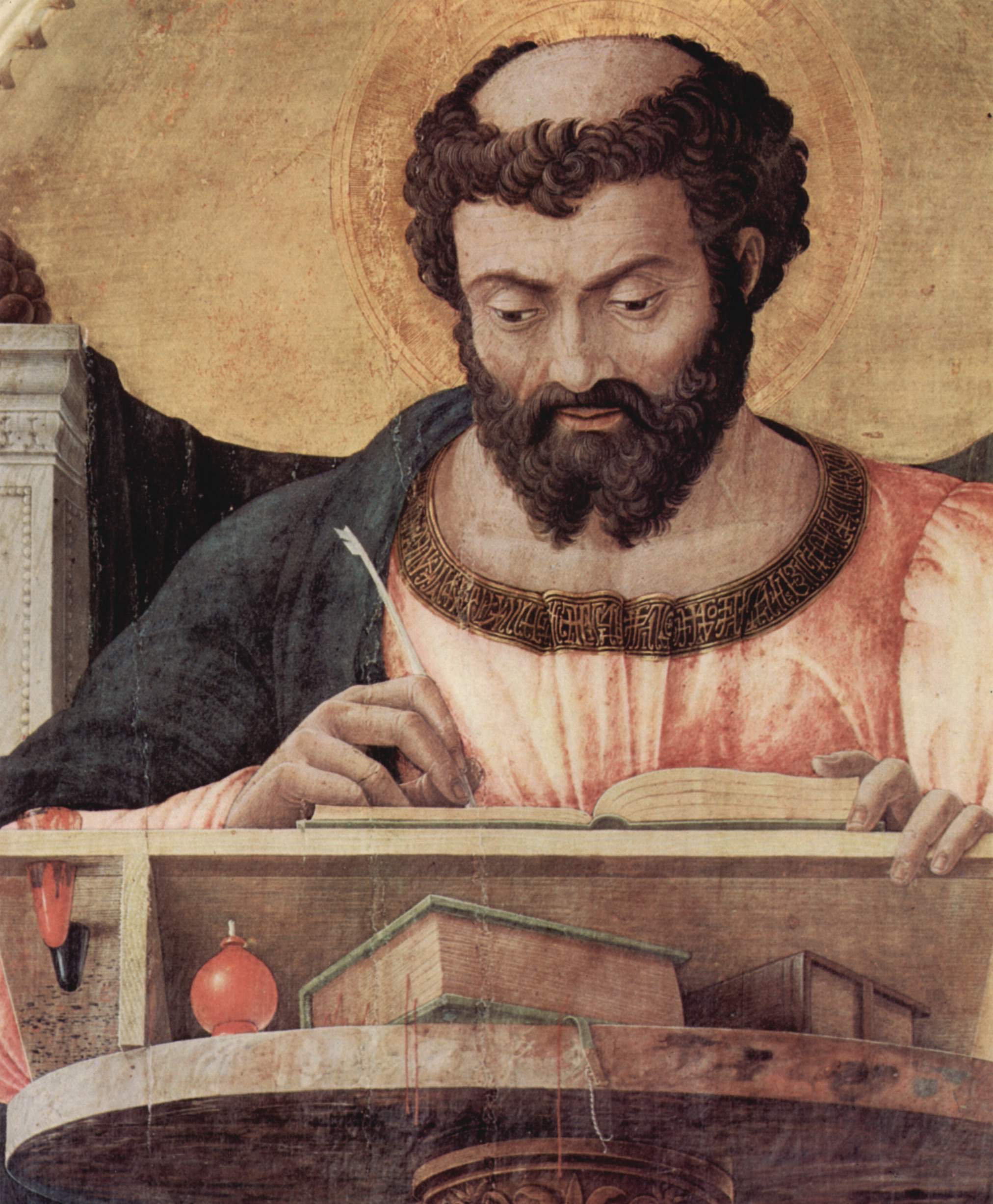 Luke the Evangelist (Hebrew: לוּקָֻא; Greek: Polytonic|Λουκάς "Loukás") was an early Christian leader who is said by tradition to be the author of both the "" and the "", the third and the fifth books, respectively, of the .

venerates him as the of s and s. His traditional Catholic feast day is .

Saint Luke was born of Greek origin in the city of .

His earliest notice is in Paul's , verse 24. He is also mentioned in 4:14 and 4:11, two works commonly ascribed to Paul. The next earliest account of Luke is in the "Anti-Marcionite Prologue to the Gospel of Luke", a document once thought to date to the 2nd century AD, but which has more recently been dated to the later 4th century. , however, claims that the following part &ndash; the only part preserved in the original Greek &ndash; may have been composed in the late 2nd century:

Some manuscripts add that Luke died "in Thebes, the capital of ". All of these facts support the conclusion that Luke was associated with Paul.

Later tradition elaborates on these few facts. states that Luke was one of the Seventy ("Panarion" 51.11), and indicates at one point that the "brother" Paul mentions in 8:18 is either Luke or . J. Wenham asserts that Luke was "one of the Seventy, the , Lucius of Cyrene and Paul's kinsman." Not all scholars are as confident of all of these attributes as Wenham is, not least because Luke's own statement at the beginning of Acts freely admits that he was not an eyewitness to the events of the Gospel.

If we accept that Luke was in fact the author of the Gospel bearing his name and also the "Acts of the Apostles", certain details of his personal life can be reasonably assumed. While he does exclude himself from those who were eyewitnesses to Jesus' ministry, he repeatedly uses the word "we" in describing the Pauline missions in "Acts of the Apostles", indicating that he was personally there at those times.

The composition of the writings, as well as the range of vocabulary used, indicate that the author was an educated man. The quote in the Letter of Paul to the Colossians differentiating between Luke and other colleagues "of the circumcision" has caused many to speculate that this indicates Luke was a . If this were true, it would make Luke the only writer of the New Testament who can clearly be identified as not being Jewish. However, that is not the only possibility. The phrase could just as easily be used to differentiate between those Christians who strictly observed the rituals of Judaism and those who didn't.

Luke as a historian

The two documents most widely attributed to Luke, The Gospel According to Luke and The Acts of the Apostles, are held in high regard by biblical historians and archaeologists for their historical accuracy and trustworthiness. [MacDowell, The New Evidence that Demands a Verdict, 64]

Archaeologist Sir William Ramsay wrote that "Luke is a historian of the first rank; not merely are his statements of fact trusworthy... [he] should be placed along with the very greatest of historians." [Ramsay, BRDTNT, 222] Professor of classics at , E.M. Blaiklock, concurs: "Luke is a consummate historian, to be ranked in his own right with the great writers of the Greeks." [Blaiklock, AA, 89]

Christian apologist Josh MacDowell notes that in specific instances where Luke's texts have been found to disagree with common scholarly knowledge, where archaeology has been able to resolve the difference, the disagreement has consistently been resolved in favor of Luke. Additionally, Luke has brought to light previously unknown details which have later been verified by historians or archaeologists. [MacDowell, The New Evidence that Demands a Verdict, 64-68]

Roman historian made note of the following attributes of Luke's writing:
* Specialized details, which would not have been widely known except to a contemporary researcher such as Luke who traveled widely. These details include exact titles of officials, identification of army units, and information about major routes.
* Details archaeologists know are accurate but can't verify as to the precise time period. Some of these are unlikely to have been known except to a writer who had visited the districts.
*Correlation of dates of known kings and governors with the chronology of the narrative.
* Facts appropriate to the date of Paul or his immediate contemporary in the church but not to a date earlier or later.
* "Undesigned coincidents" between Acts and the .
* Internal correlations within Acts.
* Off-hand geographical references that bespeak familiarity with common knowledge.
* Differences in formulation within Acts that indicate the different categories of sources he used.
* Peculiarities in the selection of detail, as in theology, that are explainable in the context of what is now known of first-century church life.
* Materials the "immediacy" of which suggests that the author was recounting a recent experience, rather than shaping or editing a text long after it had been written.
* Cultural or idiomatic items now known to be peculiar to the first-century atmosphere. [Hemer, BASHH, 104-107, as summarized by MacDowell]

Another Christian tradition states that he was the first iconographer, and painted pictures of the Virgin Mary () and of Peter and Paul. Thus late medieval s of St Luke in the cities of Flanders, or the "" ("Academy of St Luke") in Rome, imitated in many other European cities during the 16th century, gathered together and protected painters. There is no scientific evidence to support the tradition that Luke painted icons of Mary and Jesus, though it was widely believed in earlier centuries, particularly in Eastern Orthodoxy. The tradition also has support from the of India who claim to still have one of the icons that St Luke painted and Thomas brought to India. [Father H. Hosten in his book "Antiquities" notes the following "The picture at the mount is one of the oldest, and, therefore, one of the most venerable Christian paintings to be had in India.

Other traditions hold that St. Luke painted two icons which currently reside in Greece: the Theotokos Mega Spileotissa (Our Lady of the Great Cave, where supposedly St. Luke lived for a period of time in asceticism) and Panagia Soumela, and Panagia Kykkou which resides in Cyprus."

Conservative Christian scholars attribute Luke as being author of the third Gospel and the "", which is clearly meant to be read as a sequel to the Gospel account. However, other scholars are more skeptical about Luke's authorship of these books. Despite this controversy, many secular scholars give credit to Luke's abilities as an historian. Both books are dedicated to one Theophilus and no scholar seriously doubts that the same person wrote both works, though neither work contains the name of its author.

Many argue that the author of the book must have been a companion of the Apostle Paul, due to several passages in Acts written in the first person plural (known as the "We Sections"). These verses (see Acts 16:10-17, 20:5-15, 21:1-18, etc) seem to indicate the author was travelling with Paul during parts of his journeys. Some scholars report that, of the colleagues that Paul mentions in his epistles, the process of elimination leaves Luke as the only person who fits everything known about the author of Luke/Acts.

Additionally, the earliest manuscript of the Gospel (Papyrus Bodmer XIV/XV = P75), dated circa AD 200, ascribes the work to Luke; as did , writing circa AD 180; and the from AD 170. [Brown, Raymond E. "An Introduction to the New Testament", p. 267. ; 1st edition (October 13, 1997). ISBN 978-0385247672.] Scholars defending Luke's authorship point out that there is no reason for early Christians to attribute these works to such a minor figure if he did not in fact write them, nor is there any tradition attributing this work to any other author.