Downtown Portland, the city center of Portland, Oregon, United States, is located on the west bank of the Willamette River. It is in the northeastern corner of the southwest section of the city and is where most of the city's high-rise buildings are found.

The downtown area is usually considered to extend west from the Willamette to Interstate 405, and south from Union Station to just south of the Portland State University campus (also bounded by I-405). (The northeastern portion of this area is also part of the Old Town Chinatown neighborhood.) High-density business and residential districts near downtown include the Lloyd District, across the river from the northern part of downtown, and the South Waterfront area, currently in development just south of downtown in the South Portland neighborhood.

Unlike many downtown revitalization efforts around the United States at this time, Portland's plan did not call for widespread demolition and reconstruction. In the early 1970s, Portland's central city was beginning to decay, with the creation of suburban shopping malls in the neighboring cities of Beaverton, Tigard, and Gresham drawing away money and people from downtown. However, the creation of a downtown transit mall in 1977 (see Transportation, below), a new waterfront park in 1978 (later named after Governor Tom McCall), the creation of the Pioneer Courthouse Square in 1984, the opening of the Portland–Gresham light rail line in 1986, and the opening of Pioneer Place mall in 1990 successfully drew or retained businesses and lured customers. The downtown, which had been a virtual ghost town after 6 PM, is now a vibrant all-hours shopping, dining, and business venue.

This apparent success due to Portland's policies has not been without criticisms. Some charge that the transit mall and increased pedestrian traffic has attracted transient and homeless persons from around the city, and aggressive panhandling has increased, despite periodic police crackdowns.[citation needed] Others argue that a proposed expansion of the transit mall is an unneeded expense, and that parking and traffic problems in the downtown area are an indication of the failure of Portland's transit policies to address growth-related problems.[citation needed] Downtown also has an inordinate number of surface level parking lots[citation needed] which contradict the city's efforts to promote higher density and create the critical mass of storefronts needed for a vibrant downtown. Some changes are being made slowly, such as the creation of the Smart Park garage system, and conversion of a surface-level parking lot into a park with underground parking at Park Block 5 between the Fox Tower and Park Avenue West Tower.

Portland is sometimes known as "Bridgetown,"[2] due to the number of bridges that cross its two rivers. There are eight bridges entering downtown and immediately adjacent areas. The bridges are (south to north):[3]

There are two other road bridges within Portland across the Willamette—but they're outside the downtown area. See List of crossings of the Willamette River.

Most streets in downtown Portland are one-way. Naito Parkway (two-way, formerly known as Front Avenue) is the farthest east, while most of the high-rises end by I-405 to the west. Interstate 5 runs on the opposite bank of the river, crossing over on the Marquam Bridge. U.S. Route 26 connects downtown Portland to the Oregon Coast and the Cascade Range.

Downtown is also served by several forms of public transportation. Because of its shorter blocks, walking is often preferred by the locals. TriMet, the regional mass transit agency, operates MAX light rail on two alignments in downtown, one running east/west on Yamhill and Morrison streets and north/south on 1st Avenue, the other running north/south on 5th and 6th avenues. On the latter two streets, an extensive transit mall—known as the Portland Mall—limits private vehicles and provides connections between more than fifty bus lines, MAX light rail, and the Portland Streetcar.

The southern part of downtown and the West End are also served by the Portland Streetcar system, operating from South Waterfront north into the Pearl and Northwest Portland districts. The system is currently a single route, measuring 3.9 miles (6.3 km) end to end, and connects in South Waterfront with the Tram (aerial cableway) to Oregon Health & Science University (OHSU).

All of downtown lies within Portland's Free Rail Zone (known as "Fareless Square" from 1975–2010),[4] a zone in which rides on light rail and streetcars are free. The Free Rail Zone's boundaries are the I-405 freeway (the zone's west and south boundary), the Willamette River and NW Irving Street, plus a panhandle-shaped section outside of downtown, encompassing the MAX stations from the Rose Quarter to Lloyd Center.[5] Until January 2010, rides on buses were also free within this zone.[4] 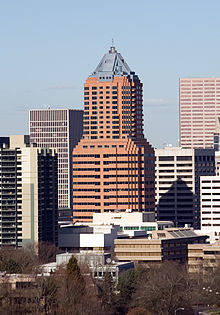 Portland has several high rise buildings.[6] The five tallest are:

While not located in the downtown area, another notable building is the Oregon Convention Center, the largest convention center in the Pacific Northwest, which draws many people across the river to downtown. 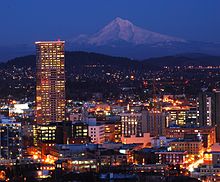 The Bancorp Tower With Mount Hood in the background