Demetrius I of Bactria

Demetrius I of Bactria
For other rulers with the same name, see Demetrius I (disambiguation).

Demetrius I (Greek: ΔΗΜΗΤΡΙΟΣ, Persian: /Pashto: دیمتریوس بلخی) was a Buddhist Greco-Bactrian king (reigned circa 200–180 BC). He was the son of Euthydemus and succeeded him around 200 BC, after which he conquered extensive areas in what now is eastern Iran, Afghanistan and Pakistan[1] thus creating an Indo-Greek kingdom far from Hellenistic Greece. He was never defeated in battle and was posthumously qualified as the Invincible (Aniketos) on the pedigree coins of his successor Agathocles.[2]

"Demetrius" was the name of at least two, probably three Greek kings of Bactria (known as "ولایت بلخی" or Balkh Province in Afghanistan) and India. The much debated Demetrius II was a possible relative, whereas Demetrios III (c.100 BC), is known only from numismatic evidence. 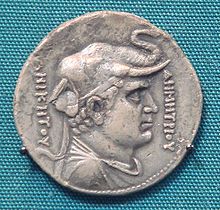 The father of Demetrius, Euthydemus, was attacked by the Seleucid ruler Antiochus III around 210 BC. Although he commanded 10,000 horsemen, Euthydemus initially lost a battle on the Arius[3] and had to retreat. He then successfully resisted a three-year siege in the fortified city of Bactra, before Antiochus finally decided to recognize the new ruler.

The final negotiations were made between Antiochus III and Demetrius. Antiochus III was reportedly highly impressed by the demeanour of the young prince, and offered him one of his daughters in marriage, around 206 BC:

"And after several journeys of Teleas to and fro between the two, Euthydemus at last sent his son Demetrius to confirm the terms of the treaty. Antiochus received the young prince; and judging from his appearance, conversation, and the dignity of his manners that he was worthy of royal power, he first promised to give him one of his own daughters, and secondly conceded the royal title to his father." Polybius 11.34[4]

The term used for "young prince" is neaniskos (νεανίσκος), suggesting an age around 16, which in turn gives a birth date for Demetrius around 222 BC.

Demetrius started the invasion of northwestern India from 180 BC, following the destruction of the Mauryan dynasty by the general Pusyamitra Sunga, who then founded the new Indian Sunga dynasty (185-78 BC). The Mauryans had had diplomatic alliances with the Greeks, and they may have been considered as allies by the Greco-Bactrians.[5] The Greco-Bactrians may also have invaded India in order to protect Greek populations in the subcontinent.[6]

Demetrius may have first started to recover the province of Arachosia, an area south of the Hindu Kush already inhabited by many Greeks but ruled by the Mauryas since the liberation of the territory by Chandragupta from Seleucus. In his "Parthian stations", Isidorus of Charax mentions a colony named Demetrias, supposedly founded by Demetrius himself:

A Greek dedication inscribed on stone and discovered in Kuliab, a hundred kilometers northeast of Ai-Khanoum, also mentioned the victories of the prince Demetrius during the reign of his father:

"Heliodotos dedicated this fragrant altar (...) so that the greatest of all kings Euthydemus, as well as his son, the glorious, victorious and remarkable Demetrius, be preserved of all pains, with the help of the Fortune with divine thoughts"[8]

The Greek campaigns may have gone as far as the capital Pataliputra in eastern India (today Patna):

"Those who came after Alexander went to the Ganges and Pataliputra" (Strabo, XV.698)

"The Greeks who caused Bactria to revolt grew so powerful on account of the fertility of the country that they became masters, not only of Ariana, but also of India, as Apollodorus of Artemita says: and more tribes were subdued by them than by Alexander — by Menander in particular (at least if he actually crossed the Hypanis towards the east and advanced as far as the Imaüs), for some were subdued by him personally and others by Demetrius, the son of Euthydemus the king of the Bactrians." (Strabo 11.11.1[9]) 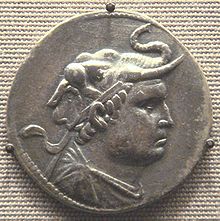 It is generally considered that Demetrius ruled in Taxila (where many of his coins were found in the archaeological site of Sirkap). The Indian records also describes Greek attacks on Saketa, Panchala, Mathura and Pataliputra (Gargi-Samhita, Yuga Purana chapter). However, the campaigns to Pataliputra are generally attested to the later king Menander I and Demetrius I probably only invaded areas in Pakistan. Other kings may have expanded the territory as well.

By ca 175 BC, the Indo-Greeks ruled parts of northwestern India, while the Sungas remained in the Gangetic, Central, and Eastern India. The Indo Greek presence in the Northwest continued until the last petty principality was absorbed by the Sakas around 20 BC.

The Hathigumpha inscription, written by the king of Kalinga, Kharavela, has been interpreted to describe the presence of the Greek king "Demetrius" with his army in eastern India, possibly as far as the city of Rajagriha about 70 km southeast of Pataliputra and one of the foremost Buddhist sacred cities, but claims that Demetrius ultimately retreated to Mathura on hearing of Kharavela's military successes further south:

"Then in the eighth year, (Kharavela) with a large army having sacked Goradhagiri causes pressure on Rajagaha (Rajagriha). On account of the loud report of this act of valour, the Yavana (Greek) King Dimi[ta] retreated to Mathura having extricated his demoralized army." Epigraphia Indica, Vol. XX.[10]

Demetrius I died of unknown reasons, and the date 180 BC, is merely a suggestion aimed to allow suitable regnal periods for subsequent kings, of which there were several. Even if some of them were co-regents, civil wars and temporary divisions of the empire are most likely.

The kings Pantaleon, Antimachus, Agathocles and possibly Euthydemus II ruled after Demetrius I, and theories about their origin include all of them being relatives of Demetrius I, or only Antimachus. Eventually, the kingdom of Bactria fell to the able newcomer Eucratides.

Demetrius II was a later king, possibly a son or nephew of his namesake, and he ruled in India only. Justin mentions him being defeated by the Bactrian king Eucratides, an event which took place at the end of the latter's reign, possibly around 150 BC. Demetrius II left behind his generals Apollodotus and Menander I, who in turn became kings of India and rulers of the Indo-Greek Kingdom following his death.

According to Ptolemy, a Demetriapolis was founded in Arachosia.

Demetrius is a legend as well as an enigma. He was mentioned by Geoffrey Chaucer ("D, lord of Ind"). 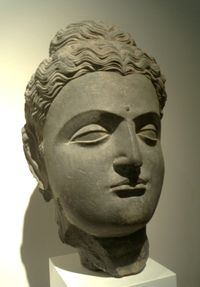 Buddhism flourished under the Indo-Greek kings, and it has been suggested by W.W. Tarn that their invasion of India was not only intended to show their support for the Mauryan empire. However, that persecution in turn is debatable, with contemporary historians such as Romila Thapar suggesting that some of the accounts might be the product of exaggeration from Buddhist missionaries. Thapar attributes purely economic motivations to the Indo-Greek invasion of Southern Asia.[11]

The coins of Demetrius are of four types. One bilingual type with Greek and Kharoshthi legends exists: it is naturally associated with the Indian Demetrius II. A series with the king in diadem are likely to be early issues of Demetrius I.

More interesting are the "elephant" coins: The first type shows Demetrius (I) with elephant-crown, a well-known symbol of India and an allusion to Ganesha.

The other "elephant" type of Demetrius I represents a rejoicing elephant, depicted on the front on the coin and surrounded by the royal bead-and-reel decoration, and therefore treated on the same level as a King. The elephant, one of the symbols of Buddhism and the Gautama Buddha, possibly represents the victory of Buddhism brought about by Demetrius. The reverse of the coin depicts the caduceus, symbol of reconciliation between two fighting serpents, which is possibly a representation of peace between the Greeks and the Sungas, and likewise between Buddhism and Hinduism.

Alternatively though, the elephant has also been described as a possible symbol of the Indian capital of Taxila (Tarn), or still as a symbol of India. Unambiguous Buddhist symbols are found on later Greek coins, but Demetrius I, who was born in the milieu of Bactria and struck coins with Buddhist gods, personally was a Buddhist. His conquests did however influence the Buddhist religion in India:

There are several parallels between Demetrius and the first representations of the Greek Buddha in human form.

Also in another parallel, the characteristic protector deity of Demetrius (Herakles standing with his club over his arm, as seen on the reverse of his coins), was represented in the Greco-Buddhist art of Gandhara as the protector deity of the Buddha.