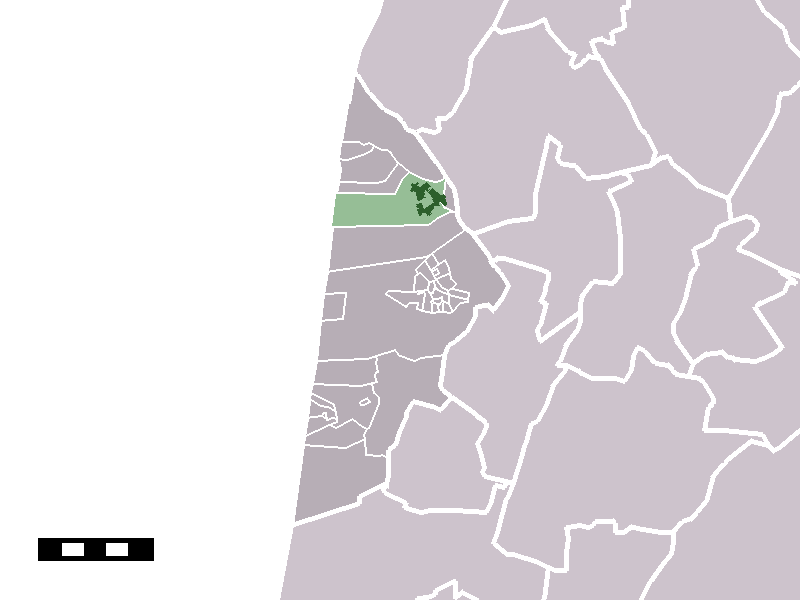 caption = The village centre (darkgreen) and the statistical district (lightgreen) of Schoorl in the municipality of Bergen (NH.).

Schoorl is a village in between the polder area of and the Kennemer . The village is about 8 km (5mls) long and never wider than 2 km (1mls). The village is heavily protected by the highest and widest dunes of the , which reach about 54m (164ft) above sealevel right behind the center of Schoorl, and are more than 5 km (3mls) wide.

Schoorl is a major local tourism location in the summer and counts over 25 campsites, the largest concentration of campsites in the .

The village, earlier named "Scorel" contains evidence of a long history in the form of two "raadhuisjes" (town hall) aging from 1600. The Dutch painter and evangelist was born here.

is the most renowned yearly festivity that is celebrated once a year on the second day (Monday) of (see also this list of dates to see when pentecost begins). The celebration is a 100-year old tradition where the local youngsters can meet partners of the opposite sex. The celebration takes place on the in the center of town. This is a century old attraction and many Dutch people spent their school trips here.

The former municipality of Schoorl also included , , , and , and had about 6500 inhabitants.

* [http://www.kuijsten.de/atlas/nh/kuyper_nh_schoorl.html Map of the former municipality in 1868]