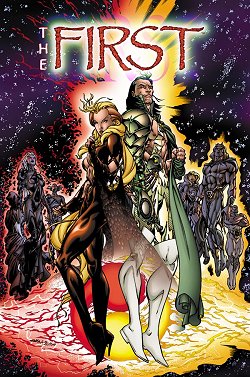 'The First' are a group of al s who appear in a self-titled comic as well as other various s published by . Styled after the Greek gods in many ways, the First represent very powerful, nearly immortal beings, who are each based on a certain emotion.

The full powers of The First were never clearly defined. They could kill ordinary humans (and alien) creatures by the thousands. However, they could kill each other so they were not immortal. They could create force fields and seem to have no need to eat or breathe. They could teleport vast distances in an instant (e.g., across a galaxy) if they knew where they were going. They could change their shape and costume seemingly at will. They appear as gods on other worlds and they could transfer a bit of their own power to one (or more) ordinary mortals, making the affected mortal nearly god-like (see both "Sigil" and "Scion"). However, when faced with science fictional technology (e.g., starships with immensely powerful lasers) it seemed The First could be defeated.

Originally, the First were a single united group, led by a god named (the first of their kind) on their home world of Elysia, in much the same way the Greek gods were led by on . War broke out when some of the First decided Altwaal no longer deserved leadership. Altwaal's love, , was killed in an assassination attempt, and he brought her back to life. Some of the First furiously stated that Altwaal violated the natural order of things; the remaining First saw an act of selfless love and praised Altwaal.

Altwaal ended the war long afterward by splitting the First into two Houses. The more selfless gods became House ; the gods showing more selfish attributes became House . To keep the peace between the First, and to keep them separated until they could one day agree to be united, Altwaal created the Eidolon Rift, a vast chasm nearly uncrossable even by the gods. To reach the other side one would be completely drained of power, left in a weakened state and at the mercy of their opposing brethren. These gods settled into the lands they were matched with; House Sinister to the left of the Eidolon Rift, ruled by ; House Dexter to the right, ruled by .

Peace and boredom settled on Elysia. Some of The First went off to live as gods on other worlds while others were exiled. On at least one world, one of The First was imprisoned by a group of powerful (but mortal) wizards (see "Mystic" #7-#15).

The First are shocked out of their stalemate by a new threat, in the form of the . These beings, granted amazing powers by forces unseen (later revealed to be and ), have the ability to drain the energies of the First and even kill them under rare circumstances. Since the First believe themselves the creators of the universe, and the most powerful beings in it, the unexpected presence of the Sigil-Bearers and their mysterious powers causes alarm among the First.

Various members of the First are sent to monitor, or control, the Sigil-Bearers, often (but not always) one from each house. Examples are: , , Darrow, Rho Rhustane, The Bard, etc. Other members of The First were exiled ( - exiled by Ingra) or captured ( - captured by Charon, see "Negation" for more details). Still others ( and ) are not actually members of The First at all but are aspects of the ascended Atlantean, Danik.

Partly as a result of the chaos caused by the Sigil-Bearers, House Sinister falls under the control of a younger god (called a Secundae) named . Shortly after he takes over, The First learn a shocking fact: they did not create the universe. The First discover that they are far younger than at least one other race, the Atlanteans.

In the last year of CrossGen comics it was revealed that the First were created by Solusandra. She created Atwaal to be her playmate, then she created other, lesser "toys" for Atwaal to play with. These "gods" were designed to personify important emotions such as: Anger (Ingra), Determination (Trenin), etc. This revelation nearly destroys the leader of House Dexter (Pyrem) and he resigns his position as leader. A new leader is chosen at the very end of the series, the daughter of Pyrem and Ingra named Persha. In the last published issue, Altwaal returns to Elysia, and both Seahn and Persha die by the Sword of Altwaal (one of the seven Weapons of Altwaal), so bringing the story of The First to an abrupt conclusion.

Due to CrossGen's bankruptcy in 2004, the plot of The First, both in their own self-titled comic and CrossGen's other titles, was cut short. The role of the First in the Negation War, a storyline in which the Sigil-Bearers and First were meant to defend the universe against invaders from another universe, is therefore unclear. One thing is known: The First were betrayed by one of their own. A duplicitous goddess of House Sinister named Evinlea had been kidnapped and taken to the "Negation" universe to be studied by that realm's mad god, Charon. Eventually she became his consort and top level advisor on invading our universe, leading the , the children of Charon, to her own homeworld Elysia to destroy the First.

In the first few moments after Evinlea's arrival on Elysia, Altwaal's love, Raamia, was once again killed, this time by Lawbringer QZTR. With the First again united, it is unknown how they will react to Altwaal restoring Raamia to life again. The preview for the next issue showed Altwaal and his First fighting the Lawbringers.