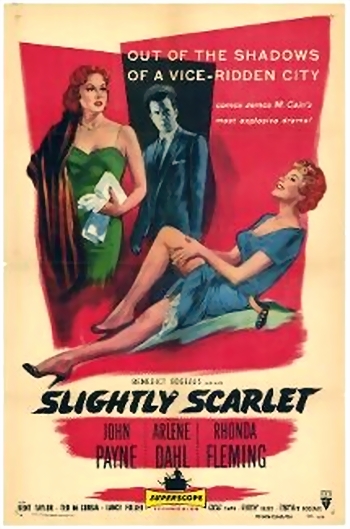 "Slightly Scarlet" is a 1956 color based on 's novel "Love's Lovely Counterfeit." The movie was directed by , and the film's was shot in by noted cameraman . [imdb title|id=0049769|title=Slightly Scarlet.]

The picture tells the story of Ben Grace (John Payne), a man working for a powerful metropolitan --Solly Casper ().

Casper is fighting to retain control of the city's criminal activities when Frank Janser (), an honest man and mayoral hopeful, begins a strong anti-crime campaign. Casper tasks Grace to dig up some dirt on the mayoral candidate and ruin his chances of election.

Grace finds some dirt when he meets the man's sexy redheaded secretary, June Lyons (). He follows her to a where she's picking up her red headed and equally sexy sister Dorothy ().

Ben Grace eventually falls for June and gives her incriminating evidence about his boss, causing violent Caspar to kill a well-known newspaperman, and leave the city. Ben Grace takes over the racket, yet he has good instincts.

At the same time, June is nervous because his sexually charged sister is attracted to Ben.

Caspar returns for revenge and shoots Ben several times. The police enter the house and arrest Casper with gun in hand. A wounded Ben is taken to the hospital, as June and Dorothy follow in tow.

The film was made when prolific director Allan Dwan was seventy years old. Dwan directed 386 films in his long career and his first work was the silent short "Strategy," produced in 1911. [imdb name| id=0358712| name=Allan Dwan.]

According to critic Blake Lucas the film was made with a modest budget, and yet the film is richly colored and well decorated and is one of the best of the Dwan-Alton pictures. Lucas wrote, "Alton's imagination in lighting is as distinctive in color as it is in ." Alton uses extensive shadows and large black areas, and he accentuates an array of pinks, greens, and especially the color orange. The end result is a startling effect in many of the scenes, all in . [Silver, Alain and Elizabeth Ward. "Film Noir: An Encyclopedic Reference to the American Style," film noir analysis by Blake Lucas, page 260. The Overlook Press, 3rd edition, 1992.]

, film critic for "", was caustic about the casting and the adaption of Cain's novel, and wrote, "...Rhonda Fleming and a laughably kittenish Arlene Dahl, are a couple of on-the-make sisters, and the fellow, played by John Payne, is an on-the-make big-time gangster. In the end all their faces are red. So, we say, should be the faces of the people responsible for this film, which is said to have been taken from a novel (unrecognizable) of James M. Cain. For it is an exhausting lot of twaddle about crime and city politics, an honest mayor, his secretary-mistress, her kleptomaniacal sister and the fellow who wants to get control of the gang. [ [http://query.nytimes.com/gst/fullpage.html?res=9E0CEED61538E637A25754C1A9659C946792D6CF&sec=&spon=&pagewanted=print Crowther, Bosley] . "The New York Times," film review, , . Last accessed: , .]