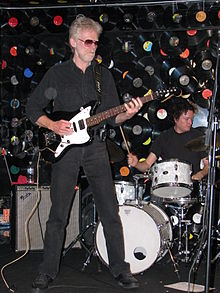 Davie Allan is a guitarist best known for his work on soundtracks to various teen and biker movies in the 1960s. Allan's backing band is almost always the Arrows (i.e., Davie Allan & the Arrows), although the Arrows have never been a stable lineup.

Allan grew up in the San Fernando Valley in Southern California, and learned to play guitar as a teenager. His career as a musician began when he teamed up with Mike Curb, a friend he met in the choir at Grant High School in Van Nuys, California, to form an instrumental surf combo. In 1963, Curb founded Cude Records, the first of many labels he would run, and released the first Davie Allan single, “War Path.” Allan participated in recording a number of other singles for Curb's label, released under group names like the Sudells, the Heyburners, and the Zanies.

In 1964, Curb founded Sidewalk Records (which was distributed by Capitol subsidiary Tower Records), brought Allan with him as a session musician, and secured a recording contract for the newly-formed Arrows. Curb had also made a deal to supply Roger Corman's schlock factory American International Pictures with soundtracks. Allan had come to Corman's attention from his playing on the soundtrack of Skaterdater.[1]

When Curb assigned soundtrack duties for biker film The Wild Angels to Allan and the Arrows, it would prove a breakthrough success. The song from the film's opening, “Blues' Theme” (sometimes listed as “Blue's Theme”), an aggressive, repetitive and very catchy instrumental showcasing Allan's new fuzzed-out (heavily distorted) guitar sound became their biggest hit (it was also one of the first songs Eddie Van Halen learned to play on brother Alex's guitar). The song stayed on the Billboard charts for 17 weeks (it peaked at #37); the single, backed with “Bongo Party,” and the soundtrack album both sold well.

Davie Allan & the Arrows went on to record a number of other soundtracks for similar AIP films over the next few years, like Devil's Angels, Thunder Alley, and Born Losers, as well as several studio albums. All contained quality material, but none would prove as successful as “Blues' Theme.”

By the time Tower Records and Sidewalk Records were dissolved in 1968, Allan had his name on some 14 albums and a prolific string of singles. Allan cut a few singles for MGM Records in the early '70s, continuing his association with Curb, but after that his career faltered.

Beginning with the Loud, Loose and Savage album in 1994, a compilation of tracks recorded over the previous 10 years, Allan (with all-new Arrows in tow) began a bid to revive his career. The album was well-received by critics, and since then he has released several more albums, including a collaboration with the Phantom Surfers, Ramonetures, an album of instrumental versions of Ramones songs, done Ventures-style.

Link Wray invented the vocabulary of modern electric guitarists, but Davie Allan was a minor pioneer in his own right. He is often overlooked, chronologically caught between Wray's more innovative work of the late 1950s and early 1960s, and Jimi Hendrix's unrivaled technical brilliance of the late 1960s.[citation needed]

Allan's most notable contribution is the creation of the fuzz sound. While Link Wray was the pioneer of guitar distortion, Allan pushed it to a new level, distorting his signal so much as to give his guitar tone a buzzing, grinding quality: “fuzzy.” Guitar sounds along similar lines would become a staple of 1970s rock and Allan's penchant for extreme, heavy, noisy guitar work displayed on tracks like “Devil's Rumble,” “Cycle-Delic” and “King Fuzz” presaged 1980s acts like Sonic Youth.

Allan is also notable for being what has been called the missing link between surf music and the likes of garage rock, 1960s punk and whacked-out psychedelia. By fusing the simple, clean, guitar-focused musicianship of surf with these heavier, tougher, more vocal-centric styles, Allan, in his own manner, helped pave the way for the “guitar hero” idiom of rock music that dominated the 1970s and 1980s.

The closest thing to a book about Davie Allan & the Arrows that exists is FUZ issue #1, a zine by Seth Wimpfheimer. It has a complete history of Allan's career and an exhaustive discography. It is still in print and available (more information is available on Allan's official homepage, below).