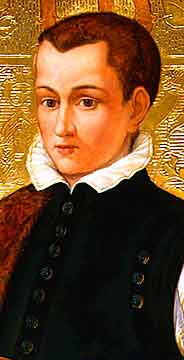 Lord Guilford Dudley ( - , ) was the husband of , who was very briefly Queen of in 1553. His first name is sometimes spelled "Guildford".

He was a son of , and . He was the younger brother of . His lineage goes to de Sutton, son of who inherited a of Sutton as descendent of a Breton warrior-follower of , leader of the Breton army in the [Genealogics descent|id=00312617|name=Hervey de Sutton, Lord of Sutton-upon-Trent] .

His father became the leader of the after the execution of , who was during the reign of King . On Edward's death, Northumberland feared the accession of the King's half-sister, the Lady Mary (future ). The Duke of Northumberland had a new order of succession signed by young King Edward, so that would be proclaimed Queen after the death of the King.

In order to prevent a restoration of Catholicism in England he married his son, Guilford, to Lady Jane on , at .

Within days of King Edward's untimely death, Jane was hastily proclaimed Queen, and against her own better judgment officially ruled for nine (or thirteen) days. The Dudley and Grey families moved to have Guilford proclaimed King, but Jane would agree only to make him . After Jane lost the throne to Mary Tudor, Jane and Guilford were moved from the Royal apartments in the to the Gentleman Gaoler's lodgings. Mary agreed to spare their lives, and for six months they lived in the Tower, with substantial freedom. However, after Thomas of 1554, Mary saw Jane and Guilford as inspirations for potential future rebellions against her. After some hesitation, Mary signed the . Eleven days after the execution, Jane's father, the Duke of Suffolk, who had been actively involved in Wyatt's revolt, suffered the same fate.

Guilford was escorted by guards to , where he was publicly executed. His last words were "Pray for me!" and his head came off with one swing of the axe. Some later reports said that he cried at his execution, but contemporary reports state that he died bravely and dry-eyed. ["Queen Jane: being some account of the life and literary remains of Lady Jane Dudley commonly called Lady Jane Grey" by Philip Sidney (London: Swan Sonnenschein and Co., 1900) p. 97] His body was carried to the chapel of St Peter ad Vincula, in the grounds of the Tower of London. On seeing the body from her window, Jane is alleged to have cried, "Oh, Guilford, Guilford." He was buried in the chapel with Jane.

Guilford's brothers, John, Ambrose, Robert and Henry, along with their father, were also for a while incarcerated in the Tower, but were subsequently pardoned.

A cell wall in the Tower of London contains a carving of the word "IANE." (The letter "J" did not come into common use until the 18th century and was frequently signified by an "I" before this.) The carving is believed to have been done by Guildford while imprisoned, perhaps pining for his wife, or his mother (also called Jane).