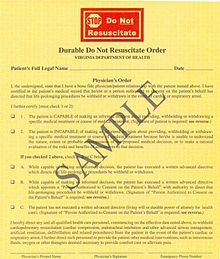 A DNR Form used in the Commonwealth of Virginia

In medicine, a "do not resuscitate" or "DNR" is a legal order written either in the hospital or on a legal form to respect the wishes of a patient to not undergo CPR or advanced cardiac life support (ACLS) if their heart were to stop or they were to stop breathing. This request is usually made by the patient or health care power of attorney and allows the medical teams taking care of them to respect their wishes. In the health care community "allow natural death" or "AND" is a term that is quickly gaining favor as it focuses on what is being done, not what is being avoided. Some critics of the term "do not resuscitate" because it sounds as if something important is being withheld, while research shows that only about 5% of patients who require ACLS outside the hospital and only 15% of patients who require ACLS while in the hospital survive [1] [2]. Patients who are elderly, are living in nursing homes, have multiple medical problems, or who have advanced cancer are much less likely to survive. [3]

A DNR does not affect any treatment other than that which would require intubation or CPR. Patients who are DNR can continue to get chemotherapy, antibiotics, dialysis, or any other appropriate treatments.

DNR documents are widespread in some countries and unavailable in others. In countries where a DNR is unavailable the decision to end resuscitation is made solely by physicians. In the United States the documentation is especially complicated in that each state accepts different forms, and advance directives and living wills are not accepted by EMS as legally valid forms. If a patient has a living will that states the patient wishes to be DNR but does not have an appropriately filled out state sponsored form that is co-signed by a physician, EMS will attempt resuscitation. This is a little known fact to many patients and primary care physicians that can cause patients to receive treatments they do not want, and this law is currently being evaluated for a constitutional challenge.

Alternative namings and abbreviations for this order are used depending on the geographic region. DNR (Do Not Resuscitate) is a common abbreviation in the United States and the United Kingdom. It may be clarified in some regions with the addition of DNI (Do Not Intubate), although in some hospitals DNR alone will imply no intubation. Clinically, the vast majority of people requiring resuscitation will require intubation, making a DNI alone problematic.

Some areas of the United States and the United Kingdom include the letter A, as in DNAR, to clarify "Do Not Attempt Resuscitation." This alteration is so that it is not presumed by the patient/family that an attempt at resuscitation will be successful. Since the term DNR implies the omission of action, and therefore "giving up", some have advocated for these orders to be retermed Allow Natural Death.[4] New Zealand and Australia (and some hospitals in the UK) use the term NFR or Not For Resuscitation. Typically, these abbreviations are written without periods between the letters, i.e. AND/DNR not A.N.D./D.N.R..

Until recently in the UK it was common to write "Not for 222" or conversationally, "Not for twos." This was implicitly a hospital DNR order, where 222 (or similar) is the hospital telephone number for the emergency resuscitation or crash team.[citation needed]

DNR compared with advance directive and living will

Advance directives and living wills are documents written by individuals themselves, so as to state their wishes for care, if they are no longer able to speak for themselves.

In contrast, it is a physician or hospital staff member who writes a DNR "physician's order," based upon the wishes previously expressed by the individual in his or her advance directive or living will. Similarly, at a time when the individual is unable to express his wishes, but has previously used an advance directive to appoint an agent, then a physician can write such a DNR "physician's order" at the request of that individual's agent.

These various situations are clearly enumerated in the "sample" DNR order presented on this page.

DNRs are not recognized by Jordan but in Israel, it is possible to sign a DNR form as long as the patient is dying and aware of his actions. Physicians attempt to resuscitate all patients regardless of individual or familial wishes.[5]

In England, for DNR as for any medical treatment, by default only the patient can give informed consent, if they have capacity as defined under the Mental Capacity Act 2005; if they lack capacity relatives will often be asked for their opinion out of respect but it does not have hard legal force on the doctors' decision. In this situation, it is their doctor's duty to act in their 'best interest', whether that means continuing or discontinuing treatment, using their clinical judgment. Alternatively, patients may specify their wishes and/or devolve their decision-making to a proxy using an advance directive, which are commonly referred to as 'Living Wills'.

The DNR decision by patients was first litigated in 1976 in In re Quinlan. The New Jersey Supreme Court upheld the right of Quinlan's parents to order her removal from artificial ventilation. In 1991 Congress passed into law the Patient Self-Determination Act that mandated hospitals honor an individual's decision in their healthcare.[6] Forty-nine states currently permit the next of kin to make medical decisions of incapacitated relatives, the exception being Missouri. Missouri has a Living Will Statute that requires two witnesses to any signed advanced directive that results in a DNR/DNI code status in the hospital.

In the U.S., cardiopulmonary resuscitation (CPR) and advanced cardiac life support (ACLS) will not be performed if a valid written "DNR" order is present. Many US states do not recognize living wills or health care proxies in the prehospital setting and prehospital personnel in those areas may be required to initiate resuscitation measures unless a specific state sponsored form is appropriately filled out and cosigned by a physician.[7][8]