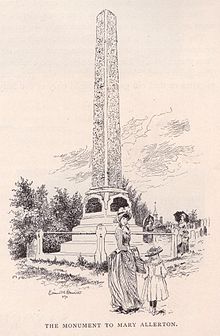 Mary Allerton Cushman (c. 1616 – 28 November 1699) was the last surviving passenger of the Mayflower.[1] She arrived at Plymouth on the Mayflower when she was about four years old and lived there her entire life; she died aged 83.

Mary Allerton was born about 1616 (according to some sources, baptised in June 1616[2]) in Leiden, The Netherlands to parents Isaac and Mary Norris Allerton. She came to Plymouth on the Mayflower in 1620, at about the age of four. Around 1636, she married Thomas Cushman, who had come to Plymouth in 1621 at the age of thirteen on the ship Fortune with father Robert Cushman, a prominent member of the Pilgrims' congregation in Leiden. Thomas and Mary had a surprisingly prosperous family; seven of their eight children survived to adulthood, got married, and provided at least 50 grandchildren. Thomas and Mary both lived to very old age, having never moved from Plymouth. Thomas died in December 1691, reaching nearly 85 years in age. Mary, who gave birth to and raised eight children, lived to the age of 83. Prior to her death in November 1699, she was the last surviving Mayflower passenger. She was buried on Burial Hill in Plymouth, Massachusetts.[3]