"The Night Gwen Stacy Died" is a story arc of the Marvel Comics comic book series The Amazing Spider-Man #121-122 (June–July 1973), that became a watershed event in the life of the superhero Spider-Man, one of popular culture's most enduring and recognizable fictional characters. The two-issue story, written by Gerry Conway, with pencil art by Gil Kane and inking by John Romita Sr. and Tony Mortellaro, features Spider-Man's fight against his archnemesis, the Green Goblin, who has abducted his girlfriend Gwen Stacy, who is killed during the battle. 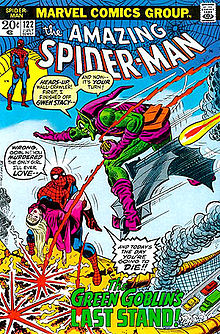 Prior to this arc, Norman Osborn had been the Green Goblin, but due to amnesia suspended his identity as the supervillain and forgot that Spider-Man and Peter Parker are the same person. Also, Harry Osborn, Parker's best friend and Norman's son, became addicted to drugs and was sequestered in the Osborn home for detoxification. Norman Osborn's parental grief, combined with financial pressure, triggers a breakdown resulting in Norman Osborn remembering his Goblin identity and again targeting Spider-Man and his loved ones for misery.

The Green Goblin abducts Parker's girlfriend, Gwen Stacy, and lures Spider-Man to a tower of either the Brooklyn Bridge (as depicted in the art) or the George Washington Bridge (as given in the text).[1][2] The Goblin and Spider-Man clash, and the Goblin hurls Stacy off the bridge. Spider-Man shoots a web strand at her legs and catches her. As he pulls her up, he thinks he has saved her. However, he quickly realizes she is dead. Unsure whether the whiplash from her sudden stop broke her neck or if the Goblin had broken it previously, he blames himself for her death. A note on the letters page of The Amazing Spider-Man #125 states: "It saddens us to say that the whiplash effect she underwent when Spidey's webbing stopped her so suddenly was, in fact, what killed her."[1]

The Green Goblin escapes, and Spider-Man cries over Stacy's corpse and swears revenge. The following issue, Spider-Man tracks the Green Goblin to a warehouse and beats him but cannot bring himself to kill him. The Goblin uses the opportunity to send his glider to impale Spider-Man behind. Warned by his spider-sense, Spider-Man dodges, and the glider instead impales the Green Goblin and seemingly kills him. Later, a devastated Parker, back at home, encounters an equally shocked and saddened Mary Jane Watson, who has lost her close friend Stacy, and the two attempt to comfort each other in the wake of their loss.

The decision to kill Gwen Stacy was made jointly by Gerry Conway, John Romita Sr. and editor Roy Thomas. They killed Gwen because they did not know what to do with her anymore. Gwen and Peter had grown so close that they were bound to get married, but nobody at Marvel wanted a married Spider-Man: it would have drastically aged him and would have made plotting difficult. At the time, he was still a college student in his late teens. Furthermore, a breakup would have appeared unrealistic.[7]

In the comic book collection The 100 Greatest Marvels of All Time: #9-6 (Amazing Spider-Man #121 was the #6 comic), Conway explained that Gwen and Peter were a "perfect couple", but taking that relationship to the next level (i.e. marriage or at least Peter revealing his secret identity to her) would "betray everything that Spider-Man was about", i.e. personal tragedy and anguish as root of Peter's life as Spider-Man. Killing Gwen Stacy was a perfect opportunity to kill two birds with one stone: breaking up the "unfitting" relationship and reinforcing the element of personal tragedy which was, in his opinion, the essence of Spider-Man.

According to the book Stan Lee's Amazing Marvel Universe,[where?] Roy Thomas and John Romita were said to have decided to kill off Gwen Stacey after deciding she would be the perfect decision to shock readers. The two started off thinking that they would kill off any major character, but decided it should be a woman. At the time, Mary Jane was only one of Peter's friends and Aunt May's death wouldn't come as too much of a surprise due to "frequent heart attacks". Lee himself agreed because he was "busy packing for a trip" and "just wanted them out of his office", and when he returned he began asking why they killed Gwen. 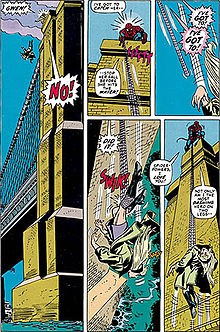 The original comic features a "snap" sound effect next to Gwen Stacy's head in the panel in which Spider-Man's webbing catches her. In The Amazing Spider-Man #125 (Oct. 1973), Marvel Comics editor Roy Thomas wrote in the letters column that "it saddens us to have to say that the whiplash effect she underwent when Spidey's webbing stopped her so suddenly was, in fact, what killed her. In short, it was impossible for Peter to save her. He couldn't have swung down in time; the action he did take resulted in her death; if he had done nothing, she still would certainly have perished. There was no way out."

In the History Channel special Spider-Man Tech, Stan Lee suggests that her neck may have indeed been snapped.

Physicist and comic collector James Kakalios, in his book The Physics of Superheroes, states that in the real world, the whiplash effect would have killed her.[8][9] [10]

For some time, however, fans speculated that the shock of the fall itself caused Gwen Stacy's death, due to the Green Goblin telling Spider-Man in The Amazing Spider-Man #121, "Romantic idiot! She was dead before your webbing reached her! A fall from that height would kill anyone — before they struck the ground!"

In a non-canonical parallel universe story in What If? #24, Spider-Man saves her by jumping down to catch her before she hits the water, subsequently using his body to cushion her from the impact, although he still needs to give her CPR after they reach dry land.

Several subsequent issues have echoed Gwen's death when others fell from great heights during Spider-Man's battles. On most occasions, he saves them by jumping after them and working with their momentum, rather than trying to stop them with his webbing (as he did in the What If? where he saves Gwen).

In a later storyline, the Green Goblin once again replays the scenario, this time with Spider-Man's wife Mary Jane Watson-Parker. As with Gwen, Mary Jane plummets toward her death (this time from the recoil from her gun when she shoots at the Green Goblin). Learning from his previous error, Spider-Man uses multiple weblines and catches every major joint, saving Mary Jane from suffering the same whiplash effect that killed Gwen. (Marvel Knights Spider-Man #12.)

During the Civil War,[11] both Iron Man and Captain America quoted Gwen as argument. Iron Man argued that if Spider-Man had received proper training as registered heroes were given, he would have saved her. Captain America responded that she died because the Goblin knew Spider-Man's identity, and the Superhuman Registration Act forbids secret identities.

In a What If...? storyline, Peter managed to save Gwen by jumping after her rather than catching her with a web-line (in the same way he saved Mary Jane in the film), allowing him to cushion her from the impact as they hit the water and subsequently give her CPR. In the aftermath of this rescue, he proposed to Gwen after revealing his secret identity to her, and, in a subsequent confrontation with the Green Goblin, Norman Osborn finally fought off his evil side when Harry moved to protect him regardless of what he'd become. However, their life was not destined to be a happy one; to ensure his victory, the Goblin had sent J. Jonah Jameson proof of Spider-Man's real identity, which Jonah had subsequently published and used to acquire a warrant for Peter's arrest, thus forcing Peter to escape from the police mere moments after his wedding to Gwen. As the issue ended, Gwen departed with Joe "Robbie" Robertson, who promised Gwen that they would do whatever they could to help Peter.

In Ultimate Spider-Man, Gwen died in a completely different way which happened a few issues after she found out Peter's secret identity, which never happened in mainstream continuity. Walking home after a talk with MJ, she realized she had forgotten her key so she tried to open the door to the cellar (Peter's lab) but that was locked too. She heard rustling in the bushes so she turned around and was grabbed by small tentacles coming from Ultimate Carnage who killed her the way it killed its other victims: stabbed them in the stomach and absorbed their fluids. The last thing Gwen saw before being turned into a mummy-like corpse was Carnage taking the form of a more solid Peter (actually Peter's father due to Dr. Connors mixing his and Peter's DNA with elements of the Venom suit, which was used with Richard Parker's DNA.)

In Ultimate Spider-Man #128 Gwen Stacy was reintroduced to the series. Carnage had recreated her body and her memories and essentially cloned her. After a battle with Venom, Carnage left Gwen to join with Eddie Brock. Since this battle, Gwen Stacy has been completely rid of the Carnage symbiote and is now living with Peter Parker.