The Museum of Ancient Greek Technology is a museum in Katakolo, Ilia Prefecture in Greece. It was founded by Kostas Kotsanas and holds 200 operating reconstructions of mechanisms and inventions of the ancient Greeks covering the period from 2200 BC to 100 AD.

It is approximately 500 meters from the pier. The tour is conducted in English / French by the curator, while the exhibits are also accompanied by explanatory labels in English as well as rich audio-visual material (posters, diagrams & videos of their operation). 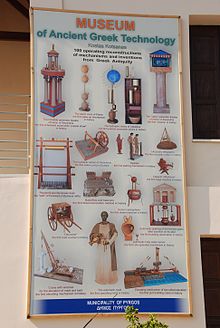 The museum's exhibits include: