Oxford Music Hall was a music hall located in Westminster, London at the corner of Oxford Street and Tottenham Court Road. It was established on the site of a former public house, the Boar and Castle, by Charles Morton, in 1861. The hall was converted into a legitimate theatre in 1917, but the theatre closed in 1926 and was demolished. The site was occupied by the first Virgin Megastore from 1979, which was rebranded as Zavvi in 2007.

After the success of the Canterbury Music Hall, many music halls imitating the formula opened in London. The Oxford Music Hall was designed by Messrs Finch Hill and Edward Paraire. The architecturally ambitious hall included deep balconies on three sides and a wide stage in front of an apse.[1] It opened on 26 March 1861 as Morton's competitor to the nearby Weston's Music Hall despite Henry Weston's appeal to the magistrates that there were already too many music halls in the area.[2] At the opening, opera singers Charles Santley and Euphrosyne Parepa-Rosa performed.[3]

The hall quickly became one of London's most popular music halls and was run by Morton and his brother in law, Frederick Stanley. The partners continued to run the Canterbury, with acts moving between the halls in coaches.[4] Many notable performers of the day appeared at the Oxford Music Hall, including Marie Lloyd, George Robey and Arthur Roberts, and the hall was famous for its lively barmaids.[5] The barrister Arthur Munby visited the hall in March 1862 and found that:

The great gay glaring hall & balconies were crammed in every part; there was barely standing room in the crowd, which was chiefly made up of men; business men, clerks, & others, of no very refined aspect. …
Socially speaking, the audience were a good deal higher than those I have seen in similar Halls at Islington & elsewhere. One result of this was, that the women present were whores, instead of respectable wives & sweethearts. Therefore another result was, that there was nothing wholesome or genial in the folks’ enjoyment: they drank their grog staring gloomily or lewdly grimacing; and the worthless dread of your neighbour which halfeducated respectability creates kept them silent and selfish.[6]

The hall burned down on 11 February 1868 and again on 1 November 1872, but each time it was rebuilt by the same firm of architects;[7] and over the years the hall was enlarged. By 1873, a square proscenium replaced the apse, and benches replaced the supper tables – with a broad promenade running where the rear balcony boxes had been – reflecting changes in the way music halls were used.[1] The Entr'acte wrote in 1881: "As a structure, the Oxford is, in our humble opinion, the handsomest hall in London."[8] 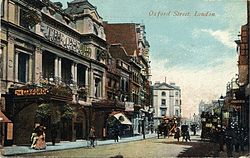 Facade of the Oxford Music Hall

In its early years, the hall offered a significant amount of classical music in its programmes. However, in 1879, Charles Dickens wrote that "the operatic selections which were at one time the distinguishing feature of the Oxford have of late years been discontinued", and the hall's programmes after that date evidence a move to popular musical forms.[9] In 1891, the Oxford became a 'Syndicate Hall' under the management of the company that also managed the Tivoli and London Pavilion. This period of the theatre was captured by Walter Sickert in a series of paintings in 1892. The theatre was rebuilt to a design by Wylson and Long, with a conventional stage, 1,040 seats including boxes, domed ceiling and opulently decorated interior, and reopened on 31 January 1893.[1] In 1891, George Robey and in 1895, Harry Tate made their solo débuts on the stage.[7]

In 1917, the hall was converted into a legitimate theatre, and the musical The Better 'Ole, by well-known cartoonist Bruce Bairnsfather, enjoyed a run of 811 performances. In 1921, the Phoenix Society revived Ben Jonson's long forgotten Bartholomew Fair. Later that year, the theatre was renovated by Charles Cochran, and a mix of films and plays were shown.[1] In 1926, the theatre closed and was demolished.[7]

A large Lyons Corner House restaurant was later built on the site. From 1979, this much-modified building was occupied by the first Virgin Megastore, [10] which was rebranded as Zavvi in 2007.

The 1860s stage and bar of the Oxford was recreated for a 1944 film, Champagne Charlie, with the lion comique and 'top of the bill' Alfred Vance played by Stanley Holloway.[11]