The National Theatre School of Canada is a private college located in Montreal, Quebec.

Established in Montreal in 1960, the National Theatre School of Canada (NTS) offers professional training in English and French in a setting that unites all the theatre arts: acting, playwriting, directing, set and costume design, and production.

NTS is one of the few schools in the world that unites all the theatre arts under one roof. English- and French-speaking students study their respective theatrical traditions, learning in an atmosphere of respect for their cultures. NTS students acquire a strong base in traditional techniques, skills, and methods of learning that will serve them throughout their lives in and outside the theatre.

Theatre is anchored by traditions that are centuries old, but it is also constantly evolving. Training at the National Theatre School reflects this paradox. NTS students’ mastery of classical techniques and traditions is complemented by their exposure to contemporary and experimental work.

In its selection of teachers and students, the NTS seeks out artists who demonstrate exceptional creativity, autonomy, talent, dedication, discipline, curiosity, sensitivity, generosity, integrity and vision. While all students share these qualities, the School does not aim to put a recognisable stamp on its graduates. Rather, its goal is to give them the tools and environment that will let them realise their full potential as unique, individual artists.

Theatre is a collaborative art. At the National Theatre School, students experience the interdependence of writing, acting, directing, design and production on a daily basis.

NTS students not only benefit from individualized training (there is a maximum of 12 students per program), but also from daily contact with creators active in shaping theatre across the country and abroad. During the school year, the School’s approximately 160 students have direct, daily interactions with a constantly changing pool of close to 200 artists, including directors, producers, technicians, set, sound, lighting, and costume designers, playwrights, actors, choreographers, singers, stage managers, and voice coaches.

NTS teachers are working professionals, leaders in their disciplines who bring freshness and relevancy to their classes. This connection to the theatre community is part of the reason why NTS graduates enter their fields so successfully upon graduation. 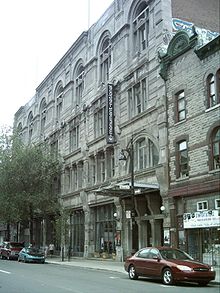 It occupies the historic landmark, the Monument-National, on Saint Lawrence Boulevard as well as a building in The Plateau district, at the corner of Saint Denis Street and Laurier Street.

The campus of the National Theatre School stretches all the way to the Monument National in the core of downtown Montreal. This hundred year old theatre, owned and operated by the NTS, has been classed a heritage building. Situated in the heart of the Quartier des spectacles (Performing Arts District), on the famous “Main” and close the St-Laurent metro station, it is one of the first multi-functional buildings constructed in Canada. Recently restored and renovated, the Monument-National is composed of three performance halls, including a number of spaces offering unlimited conversion and transformation possibilities.

The Monument-National’s two stages can accommodate every kind of production, from small concerts to large-scale shows. The Ludger-Duvernay Theatre ingeniously integrates the latest technology into a 19th-century architectural gem, while the Studio Hydro-Québec, with its clean lines and Meccano-like permutations, offers exciting flexibility. On the third floor, we discover La Balustrade, a 55-seat cabaret style theatre.

Once a juvenile courthouse, the School’s main home, the Michel and Suria Saint-Denis Pavilion (steps away from the Laurier metro station), today hums with creative energy. It sits on the border between Plateau Mont-Royal and Mile End, neighbourhoods with a brand of charm unique to Montreal.

The Pavilion houses rehearsal halls, classrooms (including specially converted spaces for voice, dance, movement, set and costume design and writing), the André-Pagé Studio (a flexible studio space with a 150-seat capacity), the Pauline McGibbon Studio (80-seat capacity), a small costume shop, a sound studio, a lighting laboratory, a projection room, a computer room, a school supplies store, a cafeteria, and a common space equipped with refrigerators and microwaves for the students.

The notion of a national theatre school first received focused attention as an indirect result of the so-called Massey Report (the report of the Massey-Levesque Royal Commission on National Development in the Arts, Letters and Sciences) of 1951. Robertson DAVIES, writing the section of the report devoted to theatre, complained that "facilities for advanced training in the arts of the theatre are non-existent in Canada," and that, consequently, "young actors, producers and technicians [...] must leave the country for advanced training, and only rarely return." Notwithstanding widespread acknowledgement of the validity of Davies' complaint, not until 1958-59 was a committee of 16 of the leading members of the Canadian theatrical community formed through the Canadian Theatre Centre / Centre du théâtre Canadien (CTC). Actor David GARDNER chaired the committee and director-teacher Michel Saint-Denis was brought in from outside the country to act as senior advisor.

The French-born Saint-Denis had what many regarded as an ideal background to offer guidance to the theatre school project (he gives details of his employment as a consultant for this project, and the involvement of his wife Suria, in the book Training for the Theatre). In the 1920s, he had worked closely with his uncle, the renowned French theatre director Jacques Copeau, to revolutionize theatrical practice and training in France through the Vieux-Colombier troupe. In the 1930s, Saint-Denis had moved to London, England, where he became one of the most highly regarded stage directors of the decade, being responsible for a series of landmark productions featuring such stars of the British stage as John Gielgud, Laurence Olivier and Alec Guinness. He also was involved in founding 2 different theatre schools in that city. Employment of Saint-Denis also symbolically expressed a central hope for the new Canadian school: that it would embrace that fusion of the best of French and English theatrical training that seemed to be embodied in Saint-Denis himself.

The CTC committee had been formed with a mandate to create a "truly bilingual school, located in Toronto." The committee decided that Montréal, as a more "truly bilingual" city, was a better location and the National Theatre School of Canada / École nationale de théâtre du Canada officially opened on 2 Nov 1960 in premises owned by the Canadian Legion at 1191 Mountain Street in Montréal. The school changed locations several times over the next decade until in 1970 it settled at 5030 rue Saint-Denis. Beginning in 1965, it also rented performing space in the Monument-National, which it purchased outright in 1978. This historic theatre (built 1891-94) was then in a dilapidated state; a major renovation in the early 1990s not only restored the beauty of the old Monument-National but introduced many modernizations, resulting in 2 excellent theatres- the 804-seat Ludger-Duvernay theatre and a smaller flexible Studio theatre, which seats as many as 180 spectators.

In the first year of its operation the National Theatre School offered only classes in acting. In the second year, 1961, a bilingual production program was inaugurated; in 1978 a French program in playwriting was added to the French acting section of the school and in 1980, an equivalent English playwriting program was added to its English acting section. Directing has been the most changeable program at the school. Beginning in the early 1980s, various attempts were made to create programs in English and French for the instruction of directing; but for both financial and pedagogical reasons, these programs have not always succeeded, and the English and French sections of the school have apparently abandoned the pursuit of synchronized objectives in this area. Indeed, while the integration of anglophone and francophone students has been fairly thorough in the production program, in other programs it has been more usual to see the English and French sections of the school operating autonomously.

While the history of the National Theatre School has generally involved a quiet, steady growth of prestige, the institution has not been without controversy. For example in 1968, which was dubbed "the year of the barricades" because of the many student protests that swept across Europe and North America, the National Theatre School experienced its own uprising. The 8 graduating acting students in the French section resigned en masse in protest against the school's disregard of Québécois playwrights, particularly as exemplified in statements made by the director of the French acting section, André Muller, who was an immigrant from France. As a result of the protest, the school pointedly reversed its neglect of Québécois plays. In 1971, Muller's successor, André Pagé, had the students perform a selection of work from various Québécois writers and began a program of commissioning work for the school from prominent Québécois playwrights. In 1998, the 8 students who had resigned were sent a letter from the school declaring that they had been reinstated as alumni and recognizing that their protest had resulted in progressive change in school policy.

The National Theatre School typically graduates approx. 60 students a year from its combined programs and English and French sections, and its alumni include many of Canada's foremost theatre artists. Some of its highly recognizable graduates are Colm Feore, Martha Henry, Ann-Marie MacDonald and Sandra Oh.

It offers professional training in all the major theatre arts in both English and French, making it one of the only co-lingual theatre schools in the world. The programs include Acting, Directing, Production, Playwrighting and Scenography.

Students are auditioned and or interviewed from all across the country, and NTS accepts international students as well. Placements at the school are highly competitive; for example, the Acting program auditions around six hundred students annually but only twelve are accepted.

The following is a list of notable students and the year they graduated.[1]