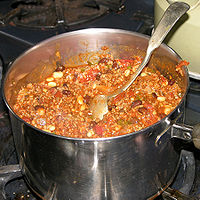 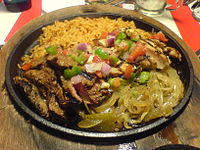 "Tex-Mex" (portmanteau of Texan and Mexican) is a term used to describe a regional American cuisine that blends food products available in the United States and the culinary creations of Mexican-Americans influenced by the cuisines of Mexico. The cuisine has spread from border states such as Texas and those in the Southwestern United States to the rest of the country. Tex-Mex is most popular in the southern state of Texas. Tex-Mex is very different from the southwest cuisine found in Arizona, New Mexico, Colorado, and Utah. In these areas, the preferred southwest cuisine is New Mexican cuisine. The southwestern state of Nevada and West Coast state of California tend to lie in the middle as far the preferred style of Mexican-American food. In some places, particularly outside of Texas, "Tex-Mex" is used to describe a localized version of Mexican cuisine. It is common for all of these foods to be referred to as "Mexican food" in Texas, parts of the United States, and some other countries. In other ways it is Southern cooking using the commodities from Mexican culture. In many parts of the U.S. outside of Texas the term is synonymous with Southwestern cuisine.[1][2][3]

Some ingredients are common in Mexican cuisine, but other ingredients not typically used in Mexico are often added. Tex-Mex cuisine is characterized by its heavy use of melted cheese, meat (particularly beef), beans, and spices, in addition to Mexican-style tortillas. Texas-style chili con carne, chili con queso, nachos, chili gravy, and fajitas are all Tex-Mex inventions.[citation needed] A common feature of Tex-Mex is the combination plate, with several of the above on one large platter. Serving tortilla chips and a hot sauce or salsa as an appetizer is common in Tex-Mex restaurants. Moreover, Tex-Mex has imported flavors from other spicy cuisines, such as the use of cumin (common in Indian food, but used in only a few Central Mexican recipes).

The word "Tex-Mex" first entered the English language as a nickname for the Texas Mexican Railway, chartered in southern Texas in 1875.[4]

In train schedules published in the newspapers of the 1800s the names of railroads were abbreviated. The Missouri Pacific was called the Mo. Pac. and the Texas-Mexican was abbreviated Tex. Mex. In the 1920s, the hyphenated form was used in American newspapers in reference to the railroad and to describe people of Mexican descent who were born in Texas.[5]

In the mission era, Spanish cuisine and Mexican cuisine was combined in Texas as in other parts of the Northern Frontier of New Spain.[6] However, the cuisine that would come to be called Tex-Mex actually originated with Tejanos (Texans of Mexican descent) as a mix of native Mexican and Spanish foods when Texas was part of New Spain and later Mexico.

From the South Texas region between San Antonio and El Paso, this cuisine has had little variation, and from earliest times has always been influenced by the cooking in the neighboring northern states of Mexico.[citation needed] The ranching culture of South Texas and northern Mexico straddles both sides of the border. A taste for cabrito (kid goat), barbacoa de cabeza (barbecued beef heads), carne seca (dried beef), and other products of cattle culture is common on both sides of the Rio Grande. In the 20th century, Tex-Mex took on such Americanized elements such as yellow cheese, as goods from the United States became cheap and readily available.

A 1968 Los Angeles Times piece claimed "[i]f the dish is a combination of Old World cooking, hush-my-mouth Southern cuisine and Tex-Mex, it's from the Texas Hill Country."[7]

The Oxford English Dictionary supplies the first-known uses in print of "Tex-Mex" in reference to food, from a 1963 article in the New York Times Magazine, and a 1966 item in the Great Bend (Kansas) Tribune.[8] Diana Kennedy, an influential food authority, explained the distinctions between Mexican cuisine and Americanized Mexican food in her 1972 book The Cuisines of Mexico. Robb Walsh of the Houston Press said the book "was a breakthrough cookbook, one that could have been written only by a non-Mexican. It unified Mexican cooking by transcending the nation's class divisions and treating the food of the poor with the same respect as the food of the upper classes."[9] Another early instance in print appeared in the Mexico City News in 1973.[citation needed]

Award-winning Texas food writer Robb Walsh (of the Houston Press) updated Kennedy and put her comments regarding Tex-Mex cooking into historical and sociopolitical perspective in The Tex-Mex Cookbook: A History in Recipes and Photos (New York: Broadway Books, 2004).