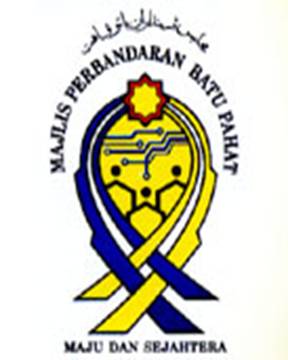 Batu Pahat (also known as Bandar Penggaram) is a town and a district located on the west coast of the state of , . It lies south-east of , south-west of , north-west of Pontian and south of .

The name Batu Pahat means 'chiseled rock' in . The origin of this name can be traced back to a legend in the 15th century; when the invading troops were chiselling rocks at a rocky spot in the coastal village of Kampung Minyak Beku, in hope to get fresh water during their retreat. They were being chased by the Melaka troops, being led by , the famous (Prime Minister) of the Malacca Empire. In fact, in around 1456, the Siamese army was led by Admiral Awi Di Chu camped in Batu Pahat before attacking Malacca [1] . Another story goes like this - after capturing Melaka, the built a fortress - "A Famosa" of granite rocks taken from the mouth of Sungei Batu Pahat. The town acquired its name, which means "chiselled stone" from the quarries near the estuary [2] . Renowned for its salted fish in the past, Batu Pahat was formerly known as Bandar Penggaram, which means town of salt-makers. In 1893, the present township was founded by Dato Bentara Luar, Mohamed Salleh bin Perang, acting on the orders of the Sultan of Johor, Sultan Abu Bakar [3] .Today, the ancient well can still be found in Minyak Beku, though little was done to maintain this ancient landmark which gives name to the town. For the town's centennial celebration in the early 90's, a quaint monument depicting a 'floating hand chiselling a rock' was set up in the town square. It became the landmark of the town instantaneously. Currently, the newly refurbished town square is popular with locals to chill out on weekend nights and also provides as a venue for many public festive celebrations.

Batu Pahat is administered by Majlis Perbandaran Batu Pahat or Batu Pahat Municipal Council which was upgraded from the previous District Council (Majlis Daerah Batu Pahat).Batu Pahat district has 525 gazetted villages (kampung-kampung pl.) and village-clusters (kampung rangkaian) where smaller villages were annexed to their bigger immediate neighbours for the purpose of administration. The villages are represented by Ketua-Ketua Kampung (village heads), answering to the Penghulu (subdistrict chief) administering the mukim. The mukim itself however is under the jurisdiction of the District Officer or Pegawai Daerah. The district office of Batu Pahat also have five district engineers (Jurutera Daerah) to oversee all the subdistricts

Batu Pahat district has 525 gazetted villages (kampung-kampung pl.) and village-clusters (kampung rangkaian) where smaller villages were annexed to their bigger immediate neighbours for the purpose of administration. The villages are represented by Ketua-Ketua Kampung (village heads), answering to the Penghulu (subdistrict chief) administering the mukim. The mukim itself however is under the jurisdiction of the District Officer or Pegawai Daerah. The district office of Batu Pahat also have five district engineers (Jurutera Daerah) to oversee all the subdistricts.

Growth in small and medium industries such as textiles, garments and electronics helped to boost development, and Batu Pahat was upgraded to town status (Majlis Perbandaran) in 2001, alongside Muar, Kluang and Skudai. As of 2008, the government does not have any plans to upgrade Batu Pahat to a city status (Majlis Bandaraya).

Agriculture is another important source of income for the locals. Batu Pahat has some of the largest rubber, oil palm, coconut and cocoa plantations in Johor. Fruit produce such as water-melons, papayas, bananas, pineapples and durians and 20 varieties of vegetables are being exported. Besides, there are several fishing villages near the Straits of Malacca, providing rich sources of fisheries. Ornamental fishes such as the Arowana are some of the major export from some companies such as Xiang Leng.

Batu Pahat is served by land transport, both locally and intercity. A new ferry terminal is located at Minyak Beku servicing Indonesia port of Tanjung Balai, Bangkalis and Batam

A celebration at Dataran Penggram

Batu Pahat is the home of Puteri Gunung Banang which is the family member of the traditional fable Puteri Gunung Ledang [5] .The first Malay dragon dance (Chinese culture) troop in Malaya was formed by Dato' Bentara Luar Mohd.Salleh Perang in Batu Pahat, only to have its final public performance in 1955, when cultural exchange gave way to racial politics. [6]

The place of Parit Sulong Massacre (The Bridge of Pekan Parit Sulong) was situated in this district. It is located in Mukim Simpang Kiri at Pekan Parit Sulong. The original bridge has now been demolished and it was replaced by new bridge, the plaque of the massacre exists until today.There used to be a Batu Pahat Bank. However, in 1963 OCBC created Pacific Bank to acquire 97% of Batu Pahat Bank. Singaporean businessmen incorporated the OCBC bank in 1919 to serve the needs of the local Chinese community. At the time Batu Pahat in Johore was a center for the production of rubber. OCBC bought the bank in anticipation of the union between Malaya and Singapore [7] . Until the 80's, both OCBC and Pacific banks were still located, face to face at the junction of Jalan Soga and Jalan Rahmat. On the 1st of January 2001, Pacific Bank Berhad merged with MayBank Berhad and PhileoAllied Bank Berhad after Malaysian Government directive.On the 16th of October 1980, Batu Pahat police killed 8 members of a sword-wielding mob led by a Cambodian refugee-cum-cult leader, Ahmad Nasir Ismail, who claimed to be Imam Mahadi, a sort of messiah. They had stormed the police headquarter in Batu Pahat, injuring 14 policemen and 9 civilians. The self-styled Mahadi was among those killed.Batu Pahat celebrated its 100th year of foundation in 1994. The delayed celebration was held in the town area with street cultural performances at night and ended with a firework display near the Dataran (town square).The outskirts of Batu Pahat were severely affected by the Typhoon Utor associated floods not only once, but twice in a span of a month from December 2006 to January 2007 (2006-2007 Malaysian floods). Affected areas include Senggarang, Sr Gading, Parit Yanni, Parit Ahmad and Parit Besar.

Batu Pahat is a sanctuary for the endangered Lesser Adjutant Stork (Leptoptilos javanicus). Known locally as burung botak or bald bird, this migratory bird belongs to the ciconidae family. The current population in Peninsular Malaysia is estimated to be less than 250. These giant birds, which can be as tall as a man, have attracted many curious residents and nature lovers to Taman Parit Labis in the evenings for bird-watching sessions. The housing estate, which is sandwiched between a rapidly developing town and the fringe of a secondary forest, has now become the best viewing spot for the bird [8] .

The Batu Pahat town square was renovated in the 1990s on the occasion of the town's centennial celebration. Sitting right in the middle of the square is the landmark, which depicts a floating hand chiselling a rock, is popular among locals to chill out at night. Common activities in the square such as children playing with balloon, remote-control cars and kite-flying can be seen during weekend nights. Surrounding the square are some old government offices. A recreational lake, named Tasik Y, is a favourite place for morning walk and excercise for the townfolks.There are also BP Walk located at Jalan Rahmat which is also a famous place for townfolks.Chinese food paradises also have in Batu Pahat town,for example in Jalan Pengkai(in mandarin:Tan Chi Jie),Jalan Shahbandar(in hokien:Hai Ki).The popular food in Batu Pahat are osyter fried,fish ball noodles,pork meat noodles,wan tan noodles,(in mandarin:Wu Xiang),pork meat Satey and many more!

Batu Pahat is famous for its local delicacies and textile industry. Once regarded as the 'Little Paris' of Malaysia, Batu Pahat was famed for its 'red-light town' reputation in the 1960's - 1970's. However, there are only 1-2 bars of such kind left in town now like Tiong Ah Bar, the oldest bar in town.

Batu Pahat is one shopping paradise which offers more value for your money, compared to other cities in Malaysia due to its lower cost of living. The Summit [9] , a shopping complex, established in 1996, is popular among townfolks and also attracting Singaporean tourists for a stop-over shopping day tour on the weekends.

In September 2006, the French retail giant Carrefour invested a total of RM90 million to set up its latest chain of hypermarkets in Taman Flora Utama. This is the second Carrefour to be built in Johore, and the tenth in Malaysia. The Taman Flora Utama township grown rapidly and a new shopping mall,Square One is just beside Carrefour will be opened in coming September.A Batu Pahat first McDonald Drive Thru Restaurant will also in constructed and plan to be open next year!

In January 2007, Batu Pahat Mall, a new hypermarket retail development, opened along the now burgeoning Jalan Tun Hussein Onn. This raised the profile of the surrounding area from a once squalid area of workshops, textile and apparel manufacturing to that of a commercial and retail area away from the town centre.

In the older part of the town, Jalan Penggaram is a street specializing in garment trading and goldsmiths. These are old but still functional and well-maintained shop houses that remind Batu Pahat of its colonial past. Local Chinese prefer to call it "Japan Street" or "Hakka Street", probably due to the dominant Hakka population managing the garment stores.

An unique Chinese temple located at Bukit Pasir - "Jian Nan Temple"There are 2 majestic mosques in Batu Pahat - Masjid Jamek and Masjid Batu Pahat. Batu Pahat also has over 400 Chinese temples, a reflection of it racial harmony. Very often, we can see busloads of Singapore tourists visiting these temples and this has become part of the income for the locals. There is a strong belief that good luck is bestowed on the prayers and they do come back very often. Some of these temples are beautifully renovated and thus have also become a tourist attraction.